LIGO has done it again! For the third time in just 18 months scientists at the Laser Interferometer Gravitational-wave Observatory (aka LIGO) observed gravitational waves rippling away from the scene of a violent cosmic collision. A paper detailing the finding was published today in the Physical Review Letters.

A long time ago, and approximately 3 billion light-years away, two black holes were locked in a dramatic death spiral, eventually colliding to form an even larger black hole. Their epic smashup sent cosmic vibrations—ripples in the very fabric of space and time— through the universe, a signal that was picked up by a pair of LIGO’s special detectors here on Earth earlier this year. Announced today, the third confirmed event recorded by LIGO could be its most exciting observation yet.

Funded by the National Science Foundation (NSF), LIGO is a $1 billion international collaboration with hundreds of scientists working together to observe and study gravitational waves using a set of identical interferometers, which are designed to record interference or variations in light waves. Currently, there’s one detector set up in Livingston, Louisiana, and one in Hanford, Washington. A third location in Europe is set to come online later this summer. Eventually, scientists hope to position five such observatories around the world.

Each detector consists of two 2.5-mile-long pipes (known as arms) with a mirror positioned at each end. The pipes are arranged in an “L” shape, and a beam of laser light is sent down the arms to bounce off the mirrors. If a gravitational wave were to cross the beam of light, it would produce a predictable signature, a wobble, which the scientists then identify in the data.

Just after two-o’clock in the morning on January 4, 2017, a gravitational wave passed over the Earth, causing the Hanford detector’s arms to shudder. Three seconds later, the same shudder was recorded in Livingston—the tale-tell sign that a detection had been made.

LIGO achieved a major scientific breakthrough in 2016 when the first detection was announced—because, until that point, gravitational waves had been purely theoretical. A century ago, Einstein first predicted the existence of gravitational waves as part of his theory of general relativity, which says that space and time are not two separate entities, but part of a dynamic, interwoven fabric called space-time. But there had been no concrete evidence of their existence until LIGO proved it.

Like ripples on a galactic pond, gravitational waves are ripples in the fabric of space and time, caused by the motion of massive objects—like two colliding black holes. As they travel  through the universe, they stretch and squeeze objects on a subatomic scale. What makes this so incredible is it allows us to view the Universe in an entirely new way. By opening this new door to the universe, we may be able to solve some of its biggest mysteries—like how black holes form, for instance.

LIGO’s first discovery proved that binary black holes exist. This means that black holes can come in pairs, orbiting each other. That discovery also tells us that if a pair of black holes are locked into a orbital dance, eventually they will combine to form an even larger black hole. The latest discovery tells us even more. The duo in this detection are estimated to be about 3 billion light-years away, which is more than twice as far away as the first two finds—approximately 1.3 and 1.4 billions light-years away respectively.

The latest detection, dubbed GW170104, involved two black holes twirling around each other in a choreographed orbital dance, until they crashed into each other forming a larger black hole in the process that weighed a whopping 49 times the mass of our sun.. The collision was so violent that some of the black holes’ mass—roughly two solar masses, or twice the weight of the sun—was converted directly into energy. This matches up with Einstein’s famous formula (E=mc2), and the excess energy—estimated to be more than all the stars and galaxies in the universe produce at any time—is what sparked the gravitational wave outburst.

Before LIGO, physicists didn’t know if stars could collapse into black holes weighing more than 20 times the sun’s mass. But thanks to these observations, they now know that heavy stellar-mass black holes can exist—and most likely form from stars that have a low metallicity (meaning they are made of mostly hydrogen and helium).

“Our handful of detections so far is revealing an intriguing black hole population we did not know existed until now,” Vicky Kalogera, a senior astrophysicist with Northwestern and the LIGO Scientific Collaboration (LSC) said in a news release.

Astronomers were also able to determine the spin of each black hole. Much like a spinning top, a black hole rotates on its own axis as it orbits another black hole. The direction of the spin can tell us a great deal about how this binary system formed. A big question that’s challenged  physicists for quite some time is the question of whether binary black holes form together or form separately and link up later on?

For GW170104, the answer is now clear: This pair of black holes linked up later in life. After analyzing the data, the team discovered that the two progenitor black holes have opposite spins, which means they could not have formed from a pair of binary stars. The two black holes were formed independent of one another and then hooked up in some sort of cosmic shuffle, which could have taken place in a dense stellar cluster.

“This is the first time that we have evidence that the black holes may not be aligned, giving us just a tiny hint that binary black holes may form in dense stellar clusters,” explained LIGO researcher S. B. Sathyaprakash of Penn State University.

This third detection proves Einstein was right yet again. He predicted that the gravitational waves would not disperse as they traveled through space and the GW170104 signal is proof positive of his prediction. The source of the gravitational wave signal was twice as far as the first two events, and the LIGO team observed no signs of dispersion.

So, what’s next? LIGO is currently in the midst of its second observing run, which began in November and runs until August when the detectors will shut down for a new round of upgrades. The European detector, VIRGO, is set to come online some time this summer. Detectors are being planned for in India and Japan as well. Those facilities will help boost our ability to detect these elusive waves, as well as help scientists more precisely pinpoint their origin.

Mike Landry of CalTech and the director of the Hanford Observatory explained that the upgrades will improve our reach into space. “We’re looking forward to making additional binary black hole discoveries in that run, but also the possibility of detections that include matter,” he explained during a media briefing.

For example, Landry is hopeful that LIGO could spot its first neutron star merger during the next run.

David Shoemaker, a LIGO spokesperson from MIT, explained during the briefing that the upgrades and extra observatories will allow us to move from novelty to science, enabling us to see the universe in a different way, while painting a more complete picture of Einstein’s relativity. 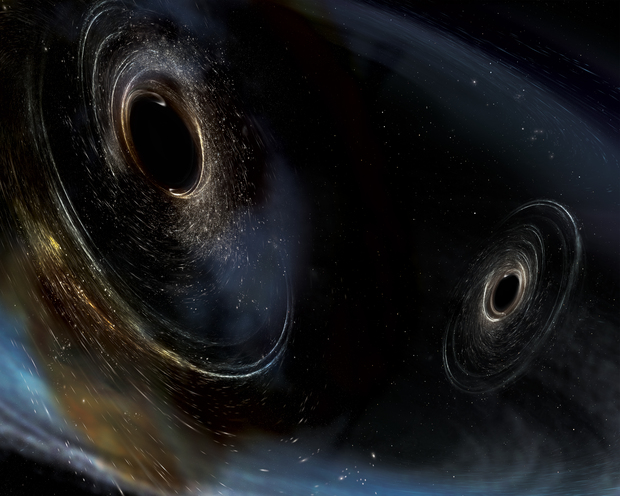