It’s happened again. This time the target was the heart of London. Last night shortly after 10 p.m., weekend merry-making was shattered when a van careened wildly across London Bridge, running over innocents. After the van came to a halt, three men emerged, brandishing large knives which they proceeded to plunge into as many people as possible.

Eyewitnesses report the men, adorned with fake suicide bomb vests, were shouting “This is for Allah” as they ran foot-long blades into people walking along the trendy Borough High Street. Saturday night partiers barricaded themselves in pubs to save their lives. Eight minutes after the horror started, it ended in gunfire. Armed police arrived at the scene and shot the three terrorists dead.

Now the police are following their standard procedure: Talking to eyewitnesses, gathering evidence from crime scenes, and rounding up anybody who might be involved, even peripherally. Several potential suspects have been taken into custody after police raids in East London, while at present the casualty count stands at seven dead (not including the terrorists) and 48 injured, many seriously.

This atrocity comes only 12 days after the horrific bomb attack in Manchester, at the end of an Ariana Grande concert, which slaughtered 22 innocents—many of them children—and maimed more than a hundred. The killer there, who blew himself up with an improvised explosive device loaded with nuts and bolts to inflict maximum shrapnel wounds, was Salman Abedi, a 22-year-old British national.

Born in Manchester to Libyan refugee parents, Abedi fits the clichéd profile for homegrown jihadists in the West: a failed assimilation case, a ne’er-do-well dropout who got caught up in drugs and hooliganism, only to turn his life around by embracing the jihad. Abedi’s fervent radicalism made him notorious at his mosque. He was viewed by his community, rightly, as a troublemaker headed for nothing good.

He was no “lone wolf,” however, and Abedi can be tied to the Islamic State. Several of his relatives remain in Libya, and have connections to jihadist groups, while Abedi was in Libya shortly before he embarked on his suicide rampage. Although the intelligence picture is still emerging, Abedi looks to be directed by ISIS rather than a self-starting terrorist.

Exactly two months before Abedi’s mass-casualty attack, London was the scene of yet another jihadist atrocity. That incident—which in a now-familiar pattern involved a car driving over innocents on a bridge—mercifully claimed only five, not counting the terrorist, who was shot dead by armed police at the gates of Parliament. The killer, who injured 49 people, was 52-year-old Khalid Masood, a native-born Briton with multiple arrests and a history of violent offenses who turned to jihadism as a kind of warped self-help program which ended in murder. By all appearances, Masood was self-radicalized, mainly through the Internet, and had no provable connections to ISIS or any other jihadist groups.

Masood, though known to the British security services due to his violent past, was not assessed as a serious terrorist risk. In contrast, Salman Abedi appeared on terrorist watch lists, presumably due to his travels to jihad-infested places like Libya, and was known to the Security Service (Britain’s domestic intelligence agency, colloquially known as MI5), yet was not under active investigation.

Such missteps lead to inevitable denunciations of “intelligence failure” and calls to “get tough” on terrorism. However, like the ritualistic incantations of togetherness, hashtags proclaiming strength, and “prayers” which follow every terrorist atrocity in the West these days, such claims are hollow, indeed empty. The reality which European politicians refuse to face is that there is no intelligence solution to the jihadist problem which now exists in Britain and France, which possess large populations of angry Muslims, a certain percentage of whom are truly radical.

This is, at root, a numbers game. Britain’s intelligence and policing operation devoted to counterterrorism is efficient and skilled, yet utterly dwarfed by the scope of the threat. As The Times reported last week, British intelligence estimates that the number of jihadists in the country is a staggering 23,000 people—of whom something like 3,000 pose a potentially imminent threat to public safety.

Moreover, even if the number of potential terrorists requiring close watching by the secret state is “only” 3,000, that target pool vastly exceeds the capabilities of British intelligence. Although little understood by the public, maintaining effective 24/7 human and technical surveillance is enormously costly in manpower and resources, even for top-notch security services like MI5. A good rule of thumb is you need two dozen operatives to closely watch one suspect. In other words, it’s severely challenging for British cops and spooks to keep even 300 potential terrorists under constant surveillance—much less 10 times that number.

For all their skills, British counterterrorism professionals cannot stop every would-be terrorist. That’s actuarially impossible. Neither is this problem new. Some 15 years ago, when I was working on a joint counterterrorism operation with British partners, they explained how they were overwhelmed since the number of potential jihadists in one particular metro area they fretted over came to about 3,000—which was roughly the size of MI5’s entire operational workforce.

It speaks volumes about the effectiveness of British cops and spooks that more innocent Britons haven’t been murdered by the thousands of jihadists living among them. However, the terrible reality the United Kingdom faces is that mass-casualty terrorist attacks are becoming the “new normal”—another unfortunate fact of life which angry and scared citizens are supposed to take in stride, like bad weather or traffic congestion.

But what if they do not? Here Prime Minister Theresa May’s tough “enough is enough” talk on the heels of the latest London attack, while encouraging, will be difficult to translate into politically achievable policies. Her statement that “there is—to be frank—far too much tolerance of extremism in our country” is welcome, while long overdue. At present, as is their custom, the Right is preaching about the evils of immigration while the Left is explaining that the real problem is Islamophobia. In truth, no pleasantries about the Prophet Muhammad will stop jihadist madmen, while even if Britain ceased all immigration at midnight tonight, there would still be an unmanageable terrorism problem in the country.

I have warned about the West’s rising domestic jihadism problem for many years, and little over a year ago I issued a particular caution, noting that something like low-grade guerrilla war had arrived in parts of Europe:

Europe is now at war again. The threat today is less terrorism than a low-grade insurgency, a guerrilla war of sorts, that hangs over much of the continent as thousands of jihadists, made proficient killers by ISIS in Syria and Iraq, return home with visions of killing “infidels,” their former neighbors. There will be no parley or negotiation with such mass murderers. Parsing the death-cult ideology that drives ISIS fighters, with the hope of making it less noxious, makes as much sense as trying to divine the finer political points of the Manson family.

We should expect more guerrilla-like attacks like Brussels yesterday: moderate in scale, relatively easy to plan and execute against soft targets, and utterly terrifying to the public. At some point, angry Europeans, fed up with their supine political class, will begin to strike back, and that’s when the really terrifying scenarios come into play. European security services worry deeply about the next Anders Breivik targeting not fellow Europeans, but Muslim migrants. “We’re just one Baruch Goldstein away from all-out war,” explained a senior EU terrorism official, citing the American-born Israeli terrorist, fed up with Palestinian violence, who walked into a Hebron mosque in 1994, guns blazing, and murdered 29 innocent Muslims.

Britons trying to remain optimistic note that they survived and eventually defeated Irish nationalist terrorism not all that long ago. But this is a flawed analogy. In the first place, at any given time during the Troubles, the number of active Provisional Irish Republican Army terrorists seldom exceeded a hundred. Moreover, the PIRA was a “normal” terrorist group with rational political motives, not a religiously-motivated death cult, and it generally eschewed killing civilians for its own sake. Indeed, atrocities like the 1987 Enniskillen attack, which murdered 10 innocents, proved a black mark for the group, even among staunch republicans. Therefore, comparing the PIRA to ISIS and its murderous Western wannabes isn’t much help to practical counterterrorism.

That said, if Britain doesn’t soon devise tough countermeasures to its vast domestic jihadism problem, many of its cities may come to resemble Northern Ireland a generation ago, with armed soldiers in battle gear patrolling the streets as “aid to civil power” while enforcing frequent security checks on average citizens with the aim of stopping terrorists.

Britain’s political class, on all sides, has ignored this problem for years—indeed decades—and now it faces a security nightmare without any palatable solutions. They were warned many times where this was leading, to no avail. In perhaps the most infamous case, nearly a half-century ago, Enoch Powell, a free-speaking Conservative MP gave an immediately notorious speech on rising immigration to Britain and its consequences. By any accounts a remarkable figure—among his accomplishments, Powell enlisted in the British Army as a private at the beginning of the Second World War and by 1945 was a one-star general—he was a classical scholar, so his speech in April 1968 referenced the ancients. As he memorably concluded about the instability he saw coming:

As I look ahead, I am filled with foreboding; like the Roman, I seem to see “the River Tiber foaming with much blood”…Only resolute and urgent action will avert it even now. Whether there will be the public will to demand and obtain that action, I do not know. All I know is that to see, and not to speak, would be the great betrayal.

Polite society turned its back on Powell after that speech, which was castigated as racist and antediluvian, and he became a pariah. However, 49 years later, the blood in British streets which he prophesied has come to pass, and it’s difficult to say Powell was wrong in his essential point. All the same, were he alive today (he died in 1998), Enoch Powell was enough of a realist that he would likely caution political elites in London that they must focus on the problems at hand—not the problems they would prefer to deal with. If they do not, low-grade jihadist insurgency will transform daily life for many Britons, not to mention provoking counter-violence which may be even worse. 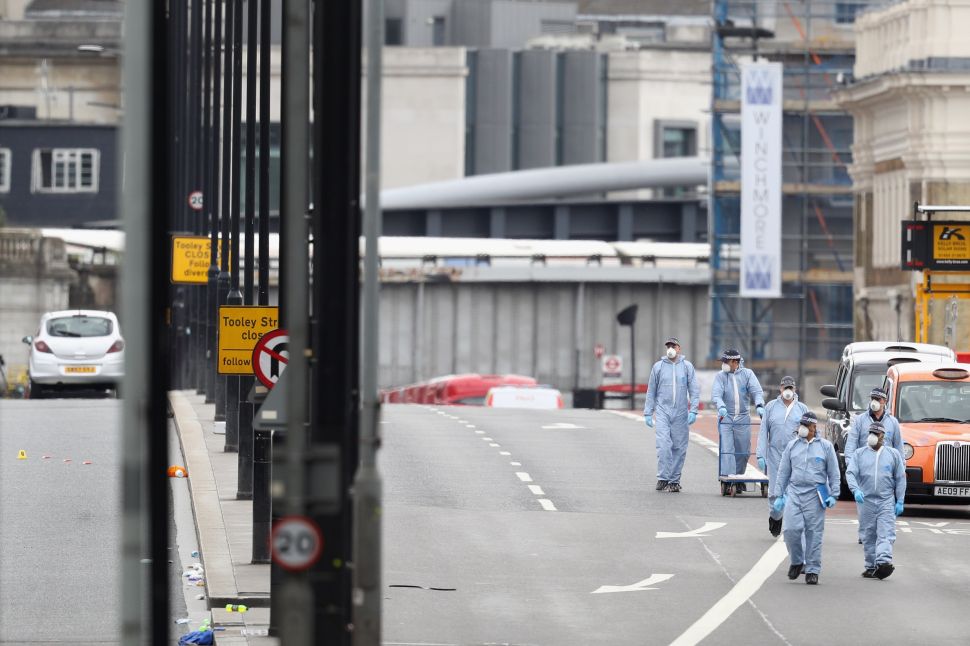