Never has it been more enjoyable to be a left-winger. Not only was there a pretend election win earlier this month, but now a horrible tragedy to shamelessly exploit. While most were reeling from the sight of a towering inferno in our capital city, the left were already coming up with ways to exploit the victims for political gain.

First, the far left Canary website ran “32 seconds of footage have returned to hound Foreign Secretary Boris Johnson after the Grenfell Tower fire.” It was of Johnson telling a Labour opponent to “get stuffed” over his claim that the then-Mayor of London was reducing fire coverage.

The implication is clear: Johnson was responsible for the spread of the fire because he cut cover. What the website fails to mention is that the Fire Brigade were on the scene at Grenfell Tower in just six minutes, well below their own target. Part of the reason for this swift attendance was the reorganization the Canary is now attacking.

When Johnson came into office, the coverage by fire crews across London was patchy. This was because the resources were allocated based on Victorian population densities. The Fire Brigade had also bottled out of shutting decrepit stations that were virtually next door to each other, for fear of upsetting the unions. London had changed, and the Fire Brigade was stuck in the past.

Some areas had crews sitting around doing nothing, while others were dangerously overworked. All Johnson did was move the resources around and shut stations that were either in the wrong place or were too small to be modernized. Any claim that he cut cover is, in fact, the opposite of what happened. Having people in the wrong place does not make for better coverage.

Saying Boris was to blame for Grenfell Tower is exactly the same as when Jeremy Corbyn claimed the reduction of 20,000 police officers contributed to the London terror attack. He failed to mention that most of these staff were, in fact, Police Community Support Officers (PCSO) who aren’t Police Constables at all and are banned from getting involved in physical altercations. No PCSOs work in counter-terrorism and most of the 20,000 weren’t even based in London.

Next dodgy claim by the left is that Conservative deregulation is to blame for the fire. They cite on social media that “The Tories have a one in, one out, policy on regulations,” but this isn’t specific to fire regulations—it is a general government policy. No reduction in fire regulations took place under the Conservatives.

The next claim is that Conservative Kensington and Chelsea Council (K&C) neglected the Grenfell Tower and refused to spend money on it to make it safe because residents were poor. Alas, the problem here is that K&C had just spent £8.7m on a refurbishment. The council had wanted to install sprinklers, but some residents objected on the grounds that it would take too long. After all, the building had been designed so that there was nothing flammable in its central core—and so, according to the architects, sprinklers should not have been needed anyway.

And, finally, Theresa May herself has been accused of being uncaring because her visit to the scene only involved meeting the emergency services. The truth is that securing streets for the Prime Minister would merely have impeded the work of the emergency services and she was therefore not allowed to do it.

Had she insisted, it would have been virtue signaling at the expense of the rescue operation, and might even have cost lives. When the green light was given, she went to visit survivors on the same day HM The Queen did.

This article is not intended to let those guilty off the hook; quite the opposite. I remember when the left were so hell bent on blaming Margaret Thatcher for the Hillsborough disaster that they ignored the role of Norman Bettison in the police cover-up and later made him Chief Constable of Merseyside. It was a slap in the face for the victims, but no one noticed because the blame game had ceased to be about the truth and instead had turned into a torrid political game.

Anyone looking at Grenfell Tower could see the recently-added cladding was well alight. The manufacturers, designers and fitters need explain what went wrong. But, if the left has anything to do with it, we will ignore the obviously guilty party so they can secure a few extra votes.

What sort of a person sees this sort of a tragedy as an opportunity? My hope is we nail the guilty people despite the attempts by the left to hide the truth. 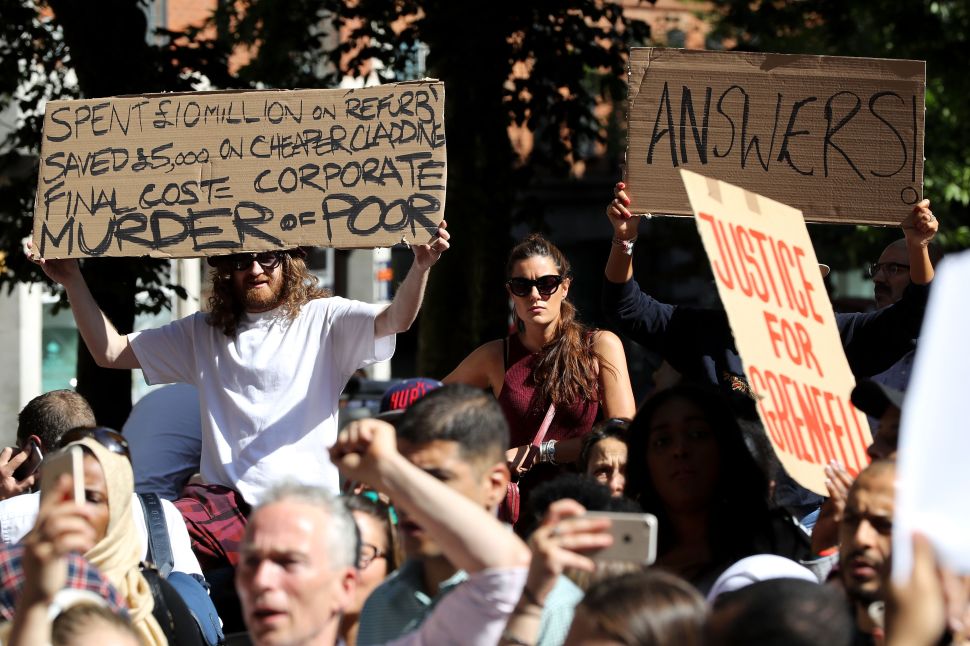