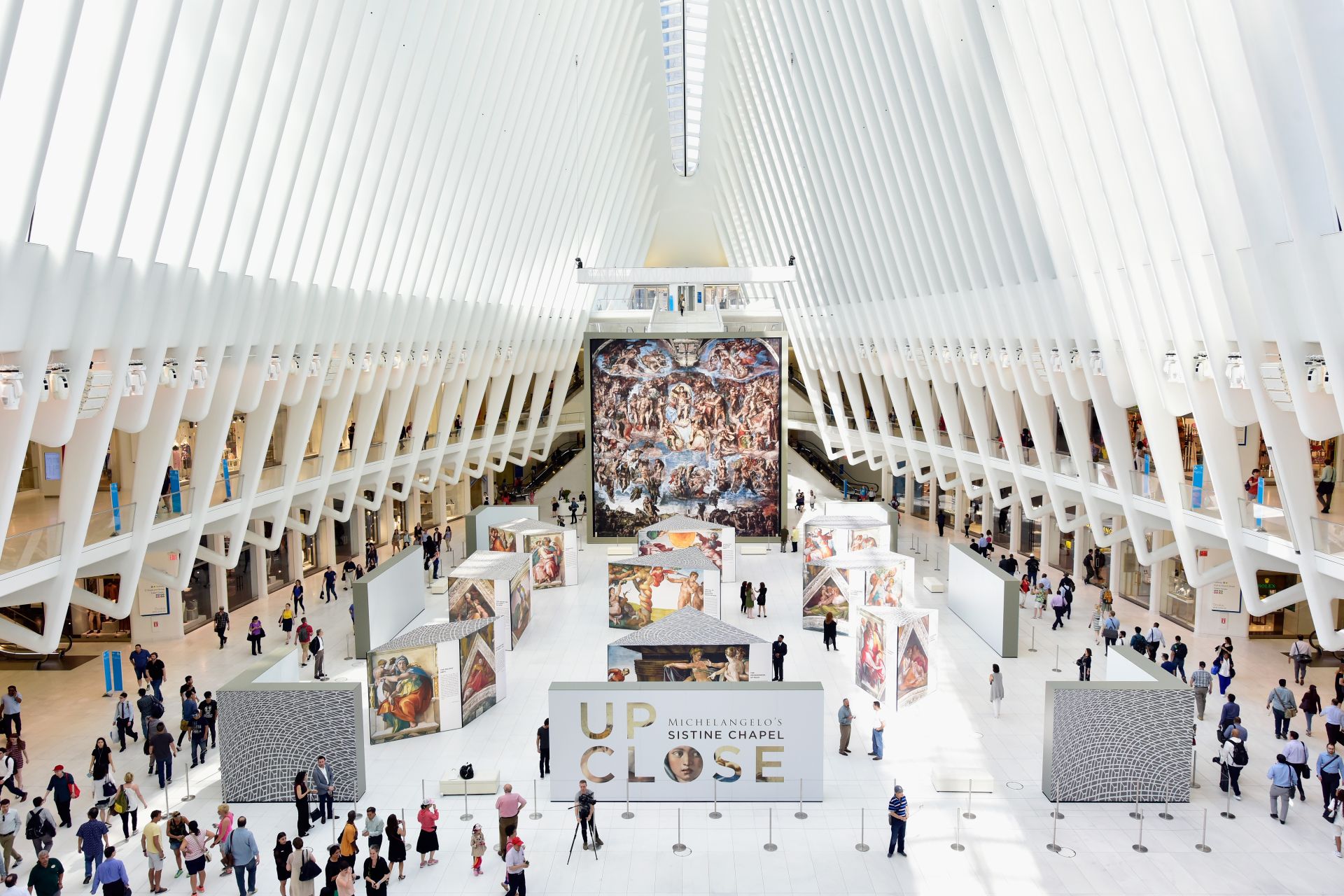 A general view of "UP CLOSE: Michaelangelo's Sistine Chapel" at The Oculus at Westfield World Trade Center on in New York City.
Eugene Gologursky/Getty Images for Westfield 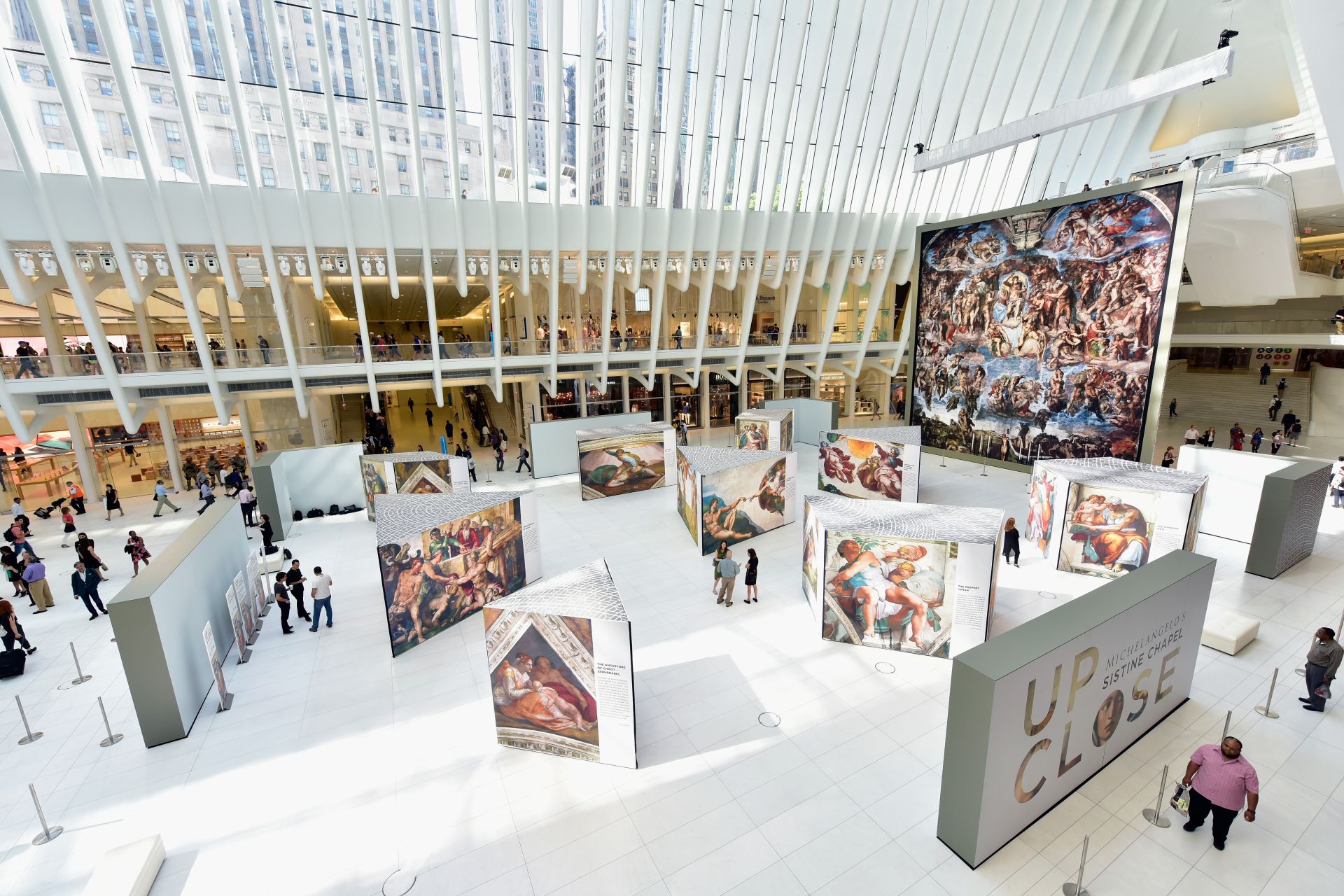 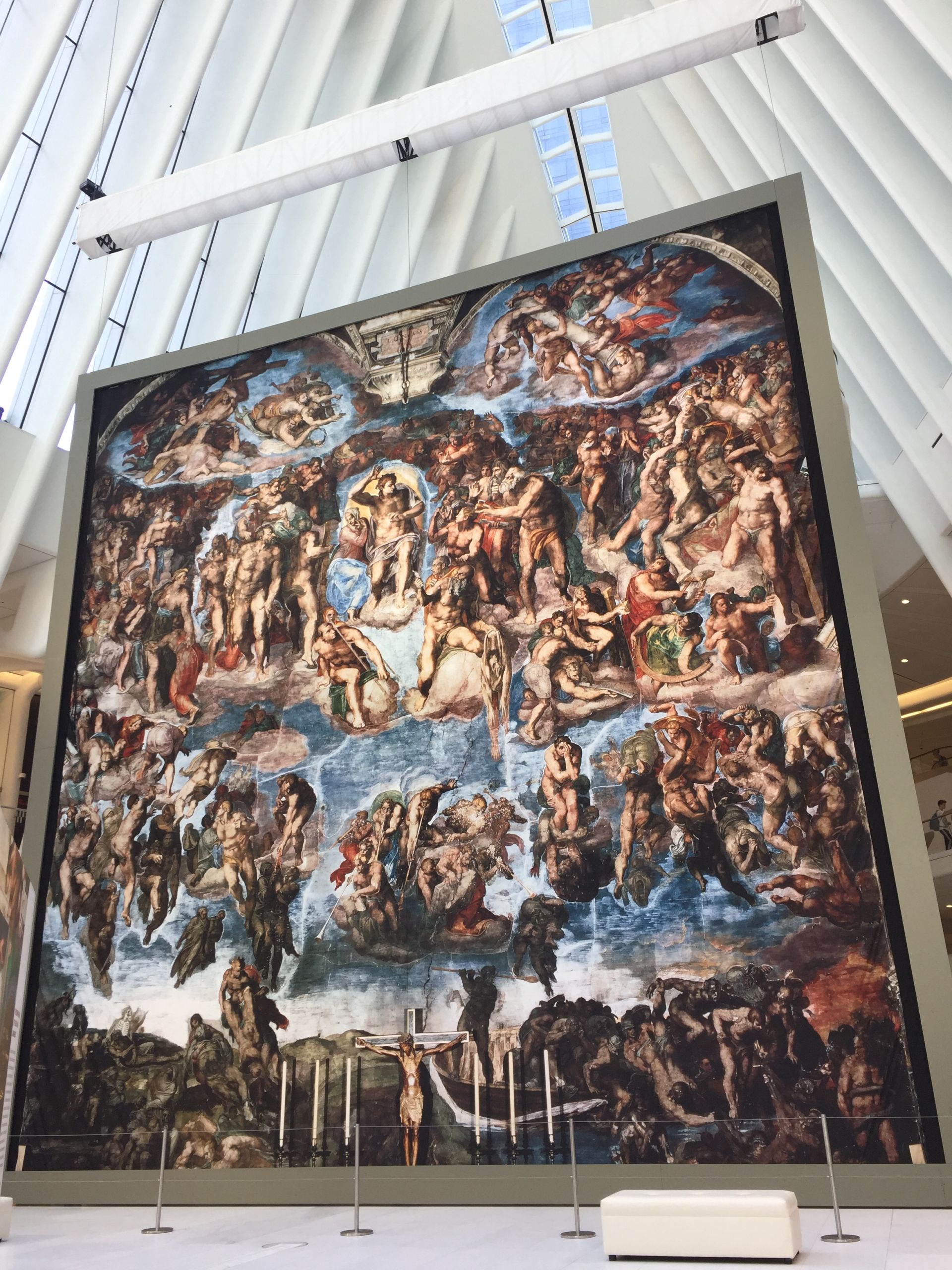 A monumental reproduction of Michelangelo's Last Judgement is the centerpiece of the show.
Alanna Martinez 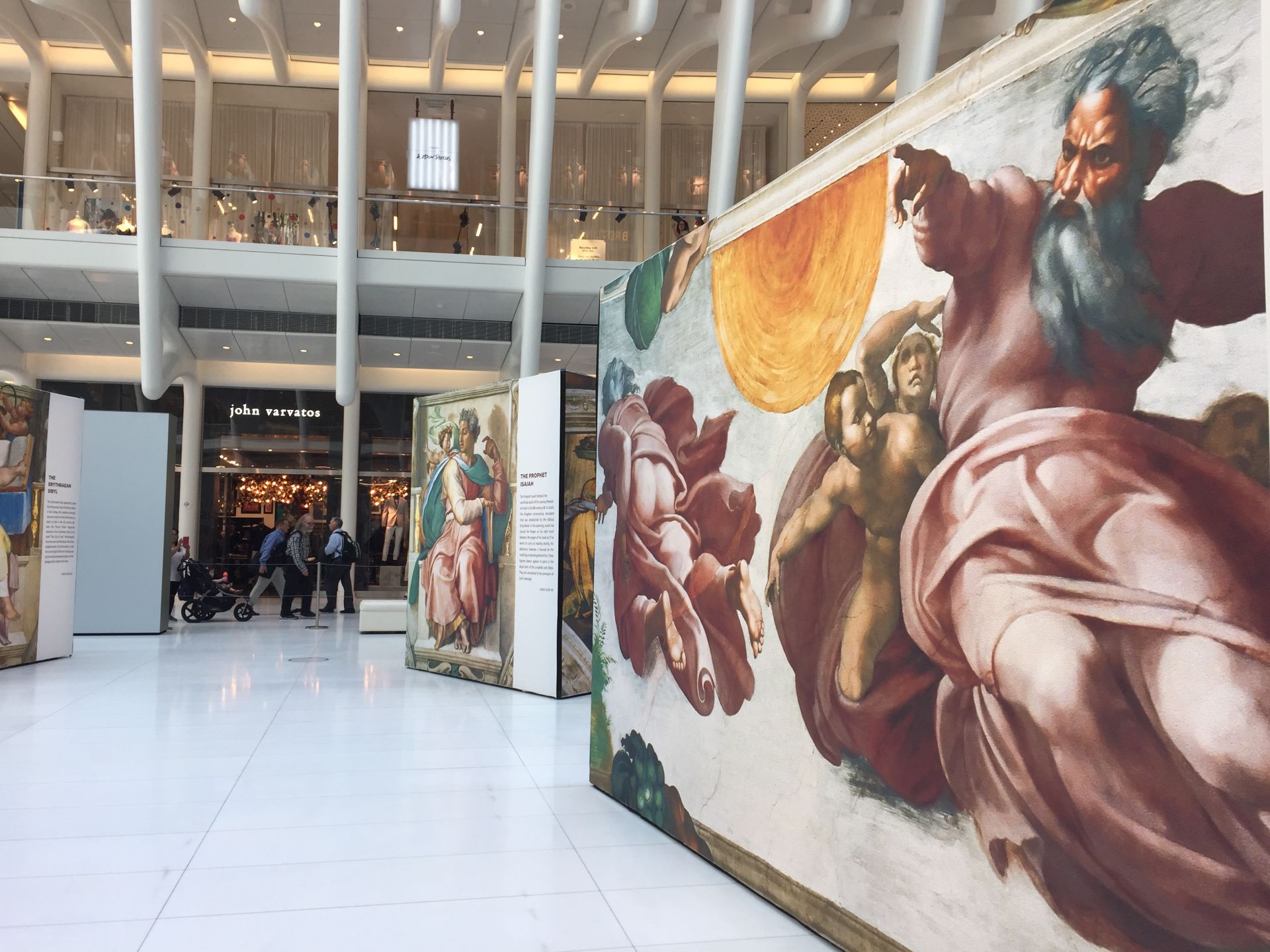 Some of the panels on view.
Alanna Martinez
Advertisement 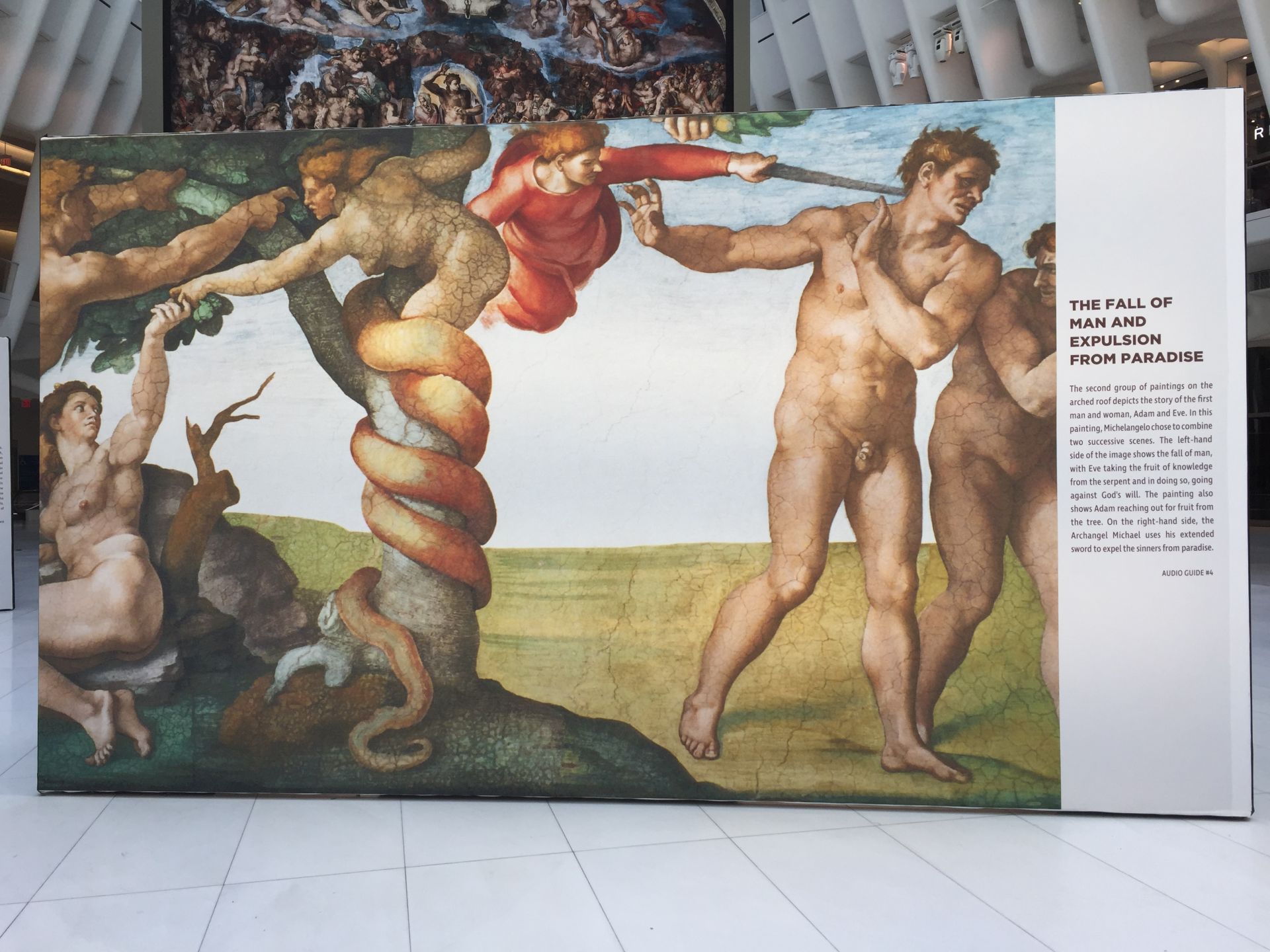 The Fall of Man and Expulsion From Paradise.
Alanna Martinez 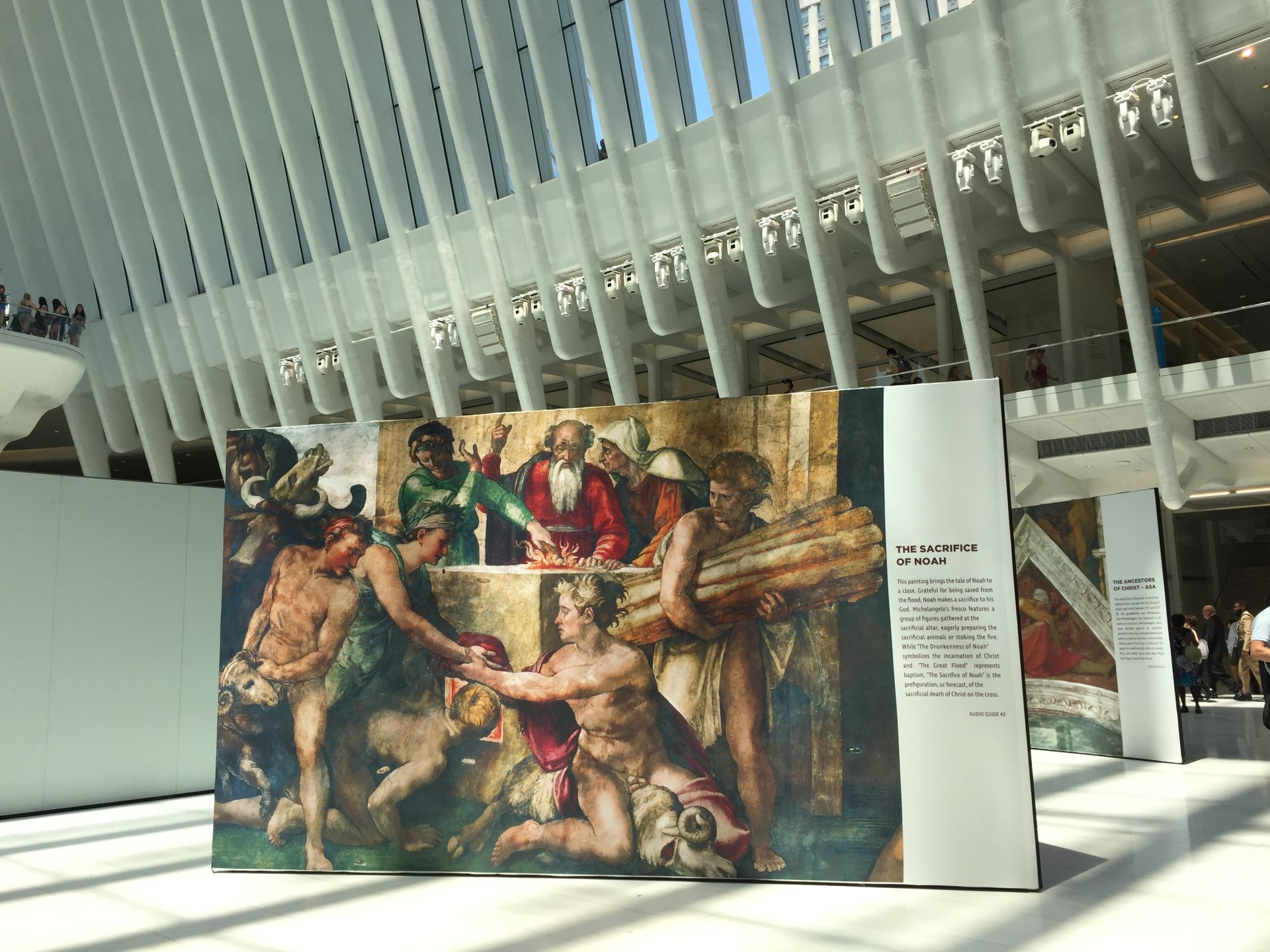 The Sacrifice of Noah.
Alanna Martinez 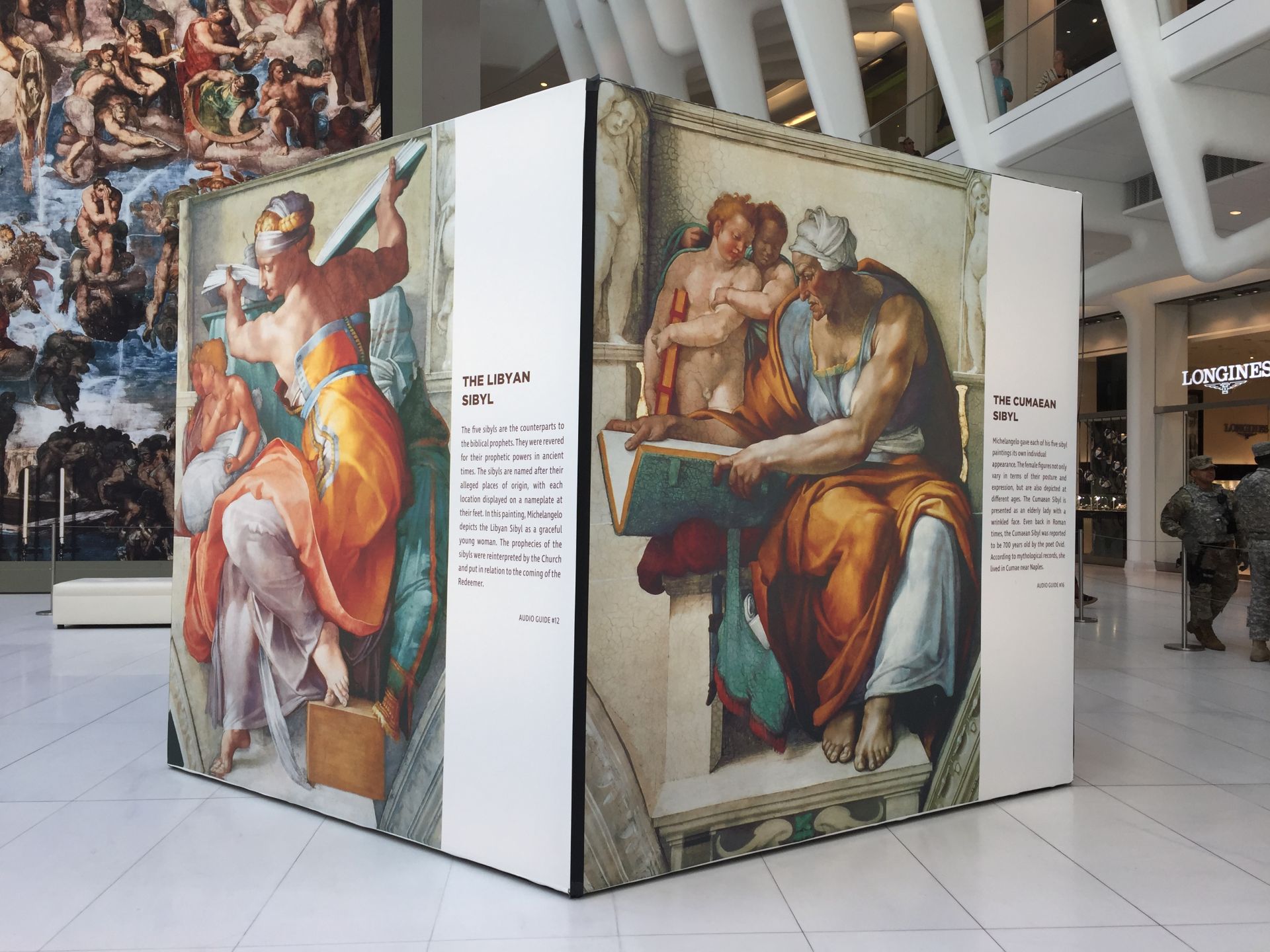 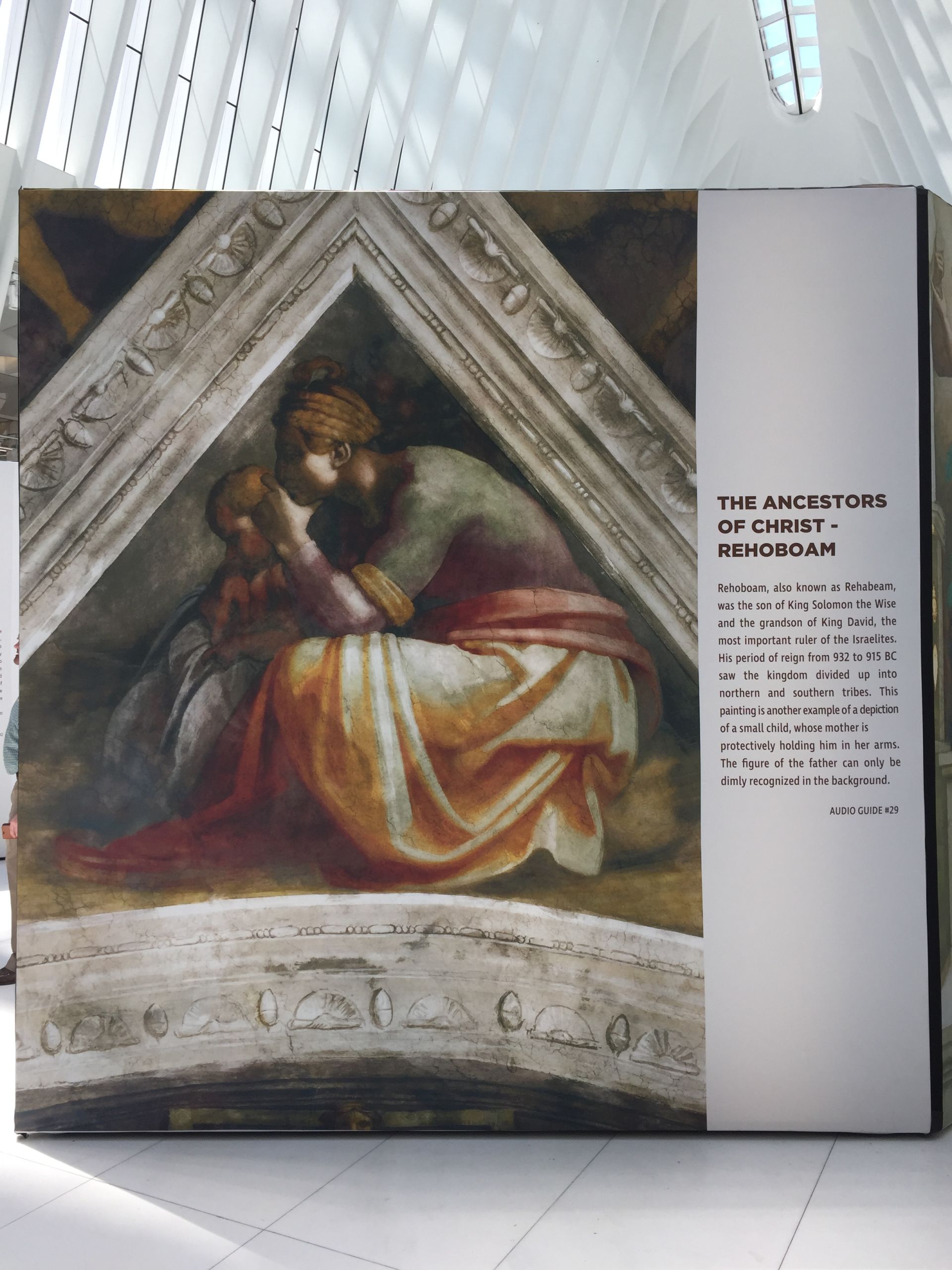 The Ancestors of Christ—Rehoboam.
Alanna Martinez 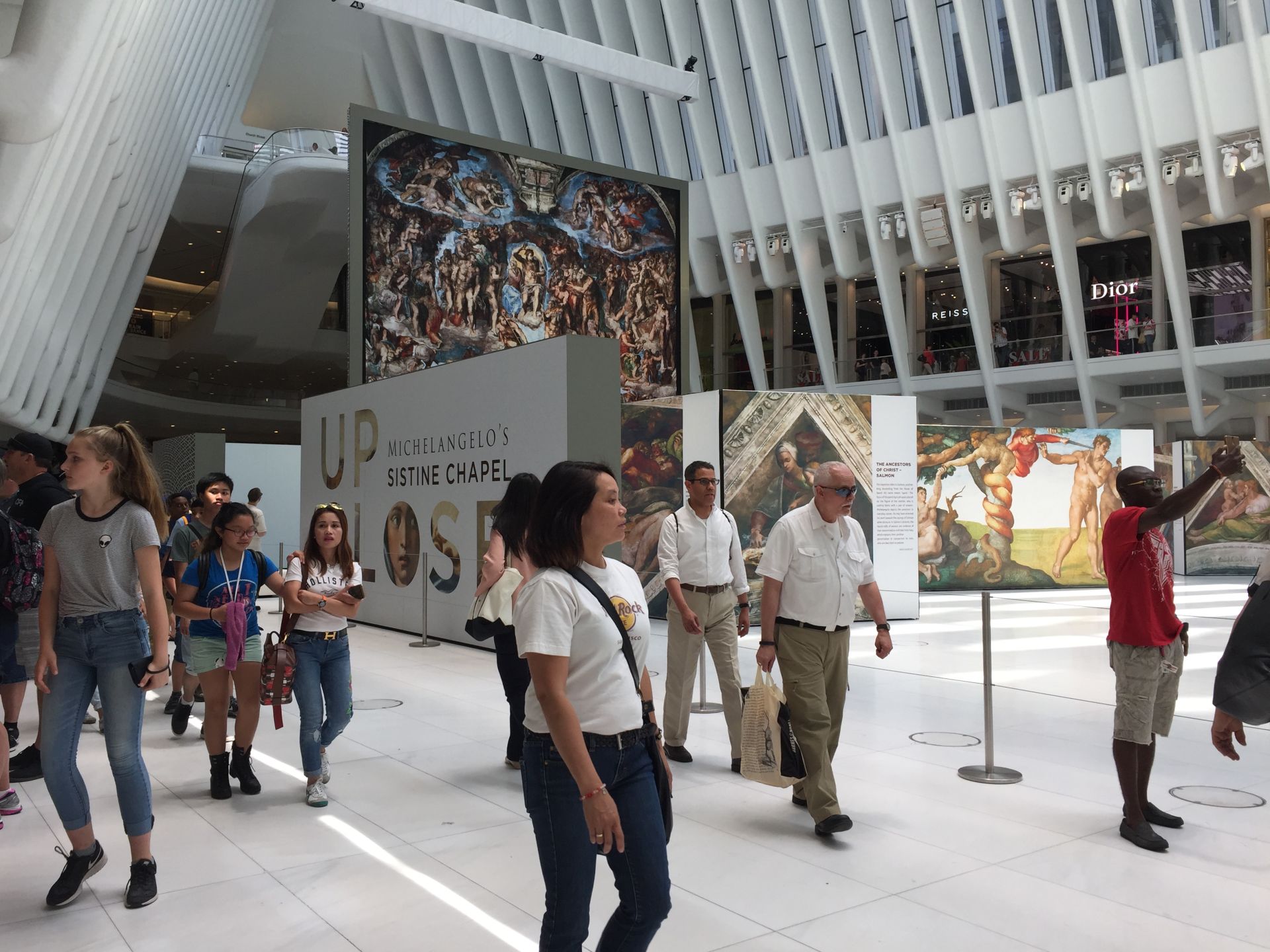 Visitors to the Oculus in front of "UP CLOSE."
Alanna Martinez 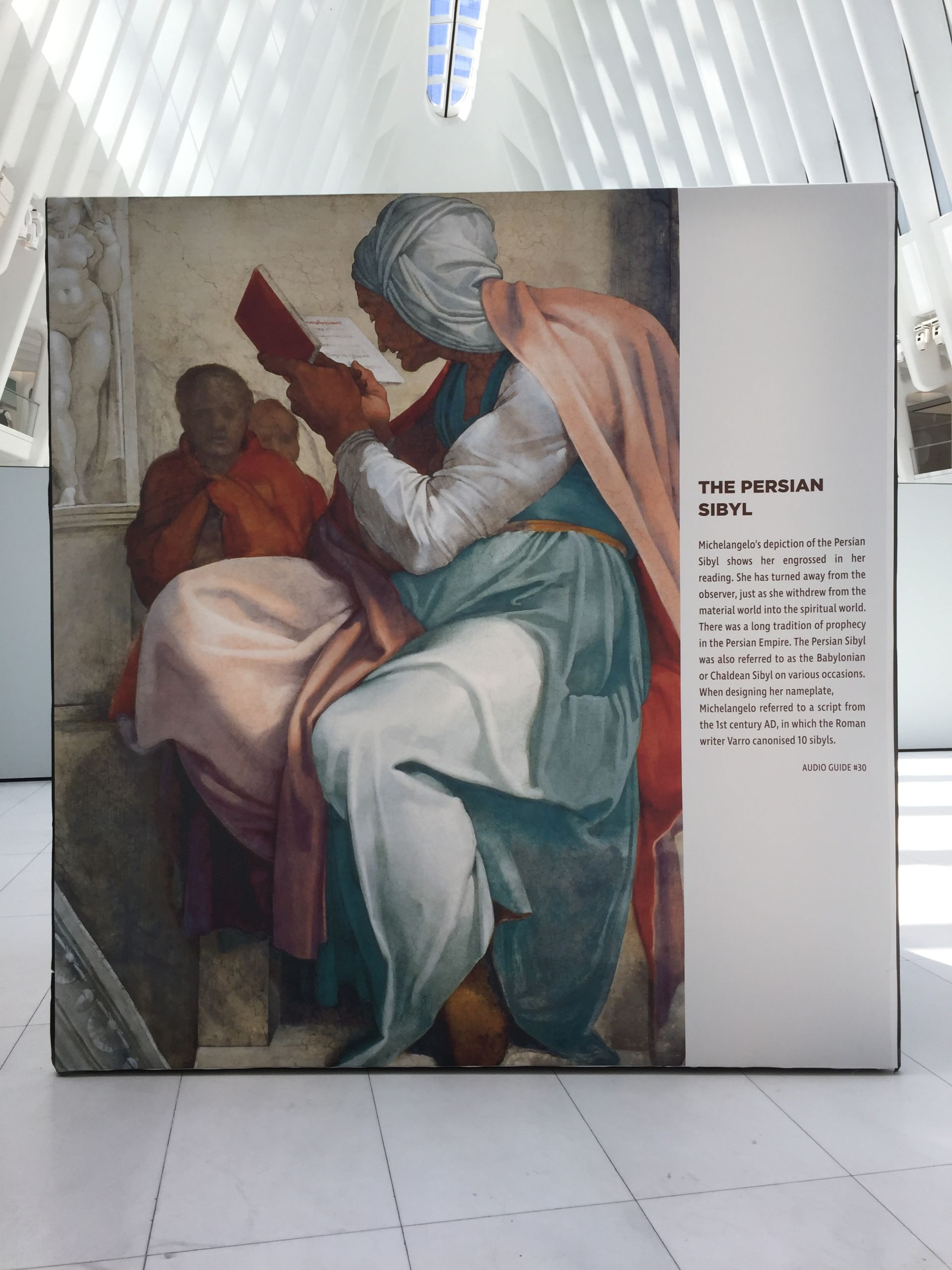 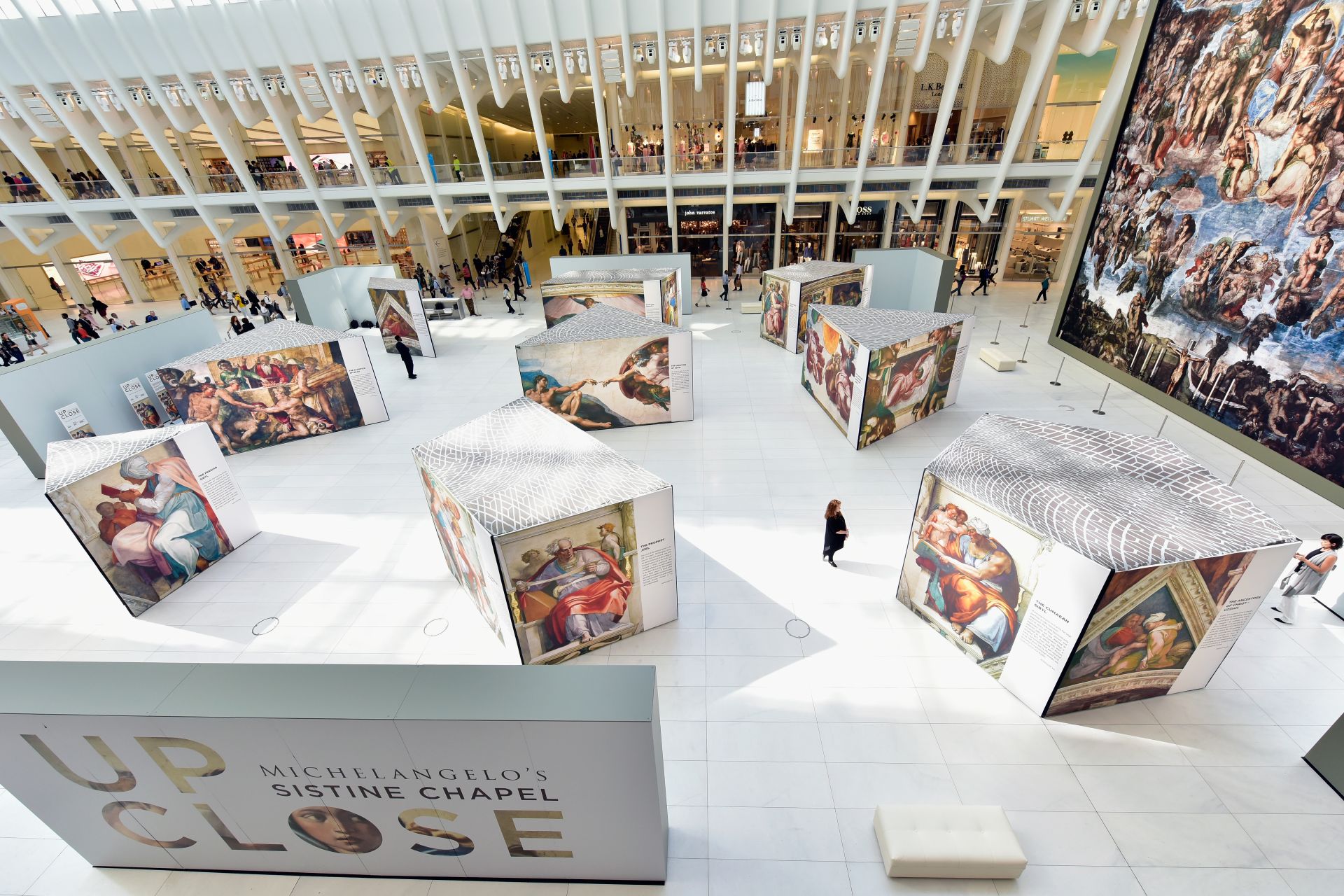 The view from above.
Eugene Gologursky/Getty Images for Westfield 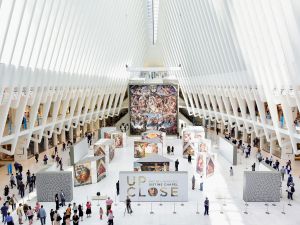 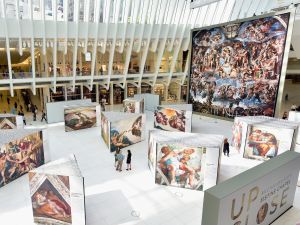 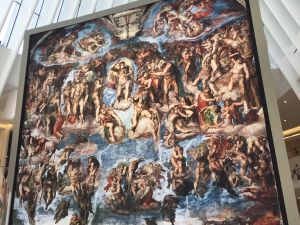 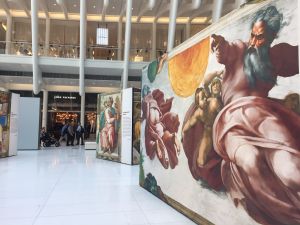 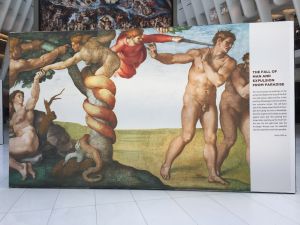 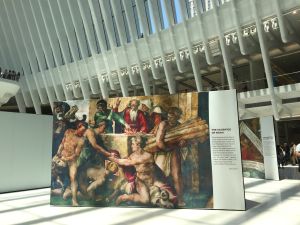 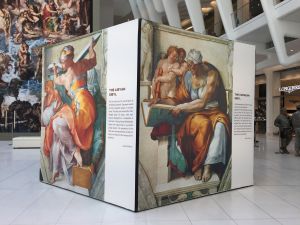 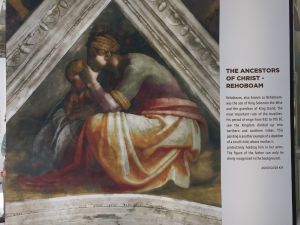 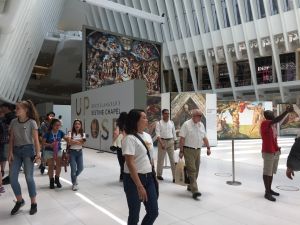 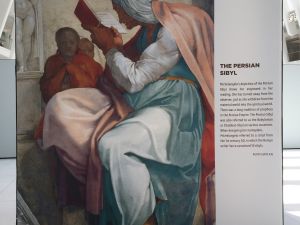 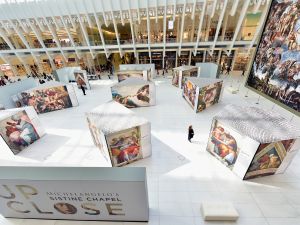 It’s summer in New York City, which means the air is thick and the sun is downright oppressive. In Lower Manhattan, Santiago Calatrava’s Oculus beckons tourists and commuters into its white cathedral-like, air-conditioned interior for a chance to soak up the sun through its sweeping skylight, without the added UV rays. But stroll through the Oculus between now and July 23—which on any normal day would be packed with shoppers perusing the offerings from Westfield World Trade’s mall or connecting to the PATH train or the subway underground—and you’ll be greeted by a towering masterwork which painted over 500 years ago by Michelangelo for Rome’s Sistine Chapel. No, it’s not the real deal, but it’s about as close—maybe even closer—than you’ll get without taking the trip to Rome and braving the snaking lines through Vatican City to see the aging frescoes in person.

“Up Close: Michelangelo’s Sistine Chapel” features 34 near life-sized reproductions of panels from Michelangelo’s frescoes for the Sistine Chapel, along with a towering recreation of The Last Judgement. Iconic imagery such as The Creation of Adam (God nearly touching fingers with the first man), the great flood and Noah’s Ark, and the banishment of man from the Garden of Eden are all displayed on large-scale panels, in photographs taken by photographer Erich Lessing. Visitors can inspect the looming cracks that threaten the historic works, which conservators have been painstakingly trying to repair with staples.

Art historian and researcher Dr. Lynn Catterson took gave an annotated tour of the show to media on Thursday afternoon, pointing out the hidden symbolism in Michelangelo’s fading brushwork, along with and historical tidbits that provide socio political insight into the complicated relationship between the artist and the Catholic Church. For instance, in the Last Judgement, Michelangelo has inserted a self-portrait (as artist’s are often wont to do) on the flayed skin of Saint Bartholomew, a nod to how he felt the Pope was “skinning him alive” with the ambitious commission on the Sistine Chapel ceiling, said Catterson. More subtext painted into world famous fresco by Michelangelo is his fascination with Dante, as seen in depictions of the souls being condemned to Hell.

“We don’t have a lot of interior spaces with frescoes of this scale and quality,” Catterson told the press. Not only is Michelangelo’s version of the biblical story one of the most famous images in the world, it’s also a grand statement from the Catholic Church at the height of the Reformation, she says. While the Pope who was in power during its creation was on board with Michelangelo’s depictions of the nude body, twenty years after he finished the work, another artist was brought in to cover it all up.

So why come see a giant reproduction of Michelangelo’s famous work, instead of making the trip to see the real thing? A release for the exhibit states: “For art lovers and the devout both, this exhibit allows a way to experience the work in a contemporary and curated experience, uncluttered, self-timed and in-depth.” For a fee of $15, visitors can certainly take their time with the art, and inspect the artist’s handiwork much closer than they would be able with the original.

“Photographic documentation of art is hugely important,” Catterson said during the preview. “I just wish we’d use it more in public spaces.” And to that, I agree. The show is no Sistine Chapel. For that, you must go to Rome, even if you only get a few minutes to see the real deal. But for now, while the city is steaming in the summer heat, this display of heavenly imagery provides a brief sanctuary in the middle of the city’s urban landscape.