Newly appointed Metropolitan Transportation Authority Chairman Joe Lhota told reporters following an A train derailment in Harlem this morning that the MTA is currently investigating what caused the brakes to go into emergency mode and that they are “beginning the process to determine” what they can do to get the New York City subway system “into a state of good repair.”

Lhota and Veronique Hakim, the MTA’s interim executive director, arrived on the scene at 10:10 a.m., according to the MTA’s official Twitter account.

Roughly two hours prior, a southbound A train just outside of the 125th Street Station went into brakes emergency—meaning that the emergency brakes automatically went on, according to Lhota, who addressed reporters on the scene. The train bumped forward, then bumped backwards and in the process of doing that, two of the train’s eight cars derailed and scraped the side of the wall.

“Everybody on this train has been evacuated,” Lhota told reporters. “Two of the cars actually went right into the 125th Street Station so people were able to get out right onto the platform. Some people unfortunately decided to go out the back way, which we never encourage. They thought they could make it on their own.”

There were three other trains in the tunnel at the time—two to the south, one to the north—which have all been evacuated by the FDNY, Lhota said. There were seven minor injuries in the derailment, with four individuals taken to Harlem Hospital due to smoke inhalation and one who was released because they decided they did not need to go to the hospital.

“One of the things that I will do while I’m here is to rebuild the confidence in the ability of the MTA,” Lhota said. “We transport millions of people every day. We want to do it safely, we want to do it as quickly and as efficiently as we possibly can, the way we’ve always done it and the way we will continue to do it.”

Lhota—Mayor Bill de Blasio’s 2013 Republican opponent who Cuomo recently tapped to head the agency—said that the investigation is ongoing and that they will determine what caused the brakes to go into emergency mode, the speed at which the train was traveling, when the power outage occurred, and damage caused to the rail.

He has not yet spoken with the train’s operator, who he said was with the investigators and others at the time of his press conference. He did confirm, however, that garbage and sanitation along the tracks caused the smoke. And he said that for the time being, service on the A, C, E and D trains is suspended until the investigation is completed.

Hakim, for her part, offered an assessment of the situation downstairs and underground.

An MTA spokeswoman told the Observer that the agency is holding the Genius Transit Challenge—an international competition seeking innovative solutions to modernize and ameliorate reliability of the city’s subway system—on Thursday and that it enacted a six-point plan. She also pointed to Hakim’s announcement at the board meeting last week of a top-to-bottom review the agency is conducting of subway delays.

At 12:15 pm, the MTA indicated that shuttle buses were running between the 59th Street – Columbus Circle station and 145th Street making nearby A, B, C and D station stops. The mayor’s office tweeted at 10:24 a.m. that the mayor was brought up to speed on the incident, and subsequently thanked the first responders who were on the scene.

Mayor de Blasio was briefed on this morning’s subway derailment at 125th St and is monitoring the situation. The FDNY and NYPD are on scene.

The Twitter accounts of the mayor’s office and Cuomo were inundated with tweets from people wondering why they were not on the scene. Cuomo’s public schedule indicated that he was in New York City today. De Blasio was scheduled to deliver remarks at the Bronx School for Law, Government and Justice graduation ceremony at 4 pm as well as at the Jewish Heritage Reception at Gracie Mansion at 5:30 pm.

In a statement, Cuomo lamented the state of the subway system and said that Lhota’s leadership will help the MTA address the problems.

“While the investigation is ongoing, this morning’s subway derailment is an unacceptable manifestation of the system’s current state,” he said. “New Yorkers deserve better. We are grateful to the first responders for their able assistance. It is my expectation that with new leadership brought by Joe Lhota, the MTA will address the fundamental issues plaguing the transit system and overhaul the organizational structure of the MTA. As I have told Joe, any support the MTA needs to get through this crisis, will be provided.”

Austin Finan, a spokesman for de Blasio, said that the mayor has been briefed on the derailment and has spoken with Lhota, noting that they will “continue to monitor the situation as the investigation continues.”

“Sometimes it’s helpful to have the Mayor there, and sometimes it serves little purpose,” Finan said in a statement. “What matters is that those who absolutely needed to be on site were there. Our emergency responders were immediately dispatched to the scene and our Fire Commissioner arrived shortly thereafter to assess the situation.”

Manhattan Councilman Mark Levine said that he is “deeply grateful that no lives were lost” and applauded the NYPD and the FDNY “for their rapid response and safe evacuation of the passengers.”

“New Yorkers already know the city’s subway system has become unreliable, but today’s A train derailment was a frightening demonstration that in extreme cases it can even be a threat to public safety,” Levine said in a statement. “The MTA needs to recognize the severity of the problem so we can start a new conversation about what solutions are necessary before another accident like this occurs—not after. These issues must be met with immediate and dramatic action.”

John Raskin, executive director of the Riders Alliance, a membership organization of subway and bus riders in New York, said riders had a “terrifying experience this morning when a train derailed” and thanked MTA personnel and emergency responders who helped subway riders evacuate safely “in a dangerous situation.”

“Scared subway riders have one question: Where is Governor Cuomo?” Raskin said in a statement. “As the subway crumbles from decades of neglect, Governor Cuomo continues to point fingers instead of coming up with a credible plan to fix the MTA.”

He said that no matter what the “proximate cause of today’s derailment,” nothing should “cause a train to come off the rails.”

“First an F train traps people underground,” he continued. “Then an A train derails. Incidents like this will keep happening until Governor Cuomo takes charge with a plan to fix a failing transit system. What will it take for the Governor to stop making excuses and start funding public transit?”

This story has been updated to include comments from Governor Cuomo, the mayor’s office and additional comments from the MTA on the Genius Challenge and its top-to-bottom review. 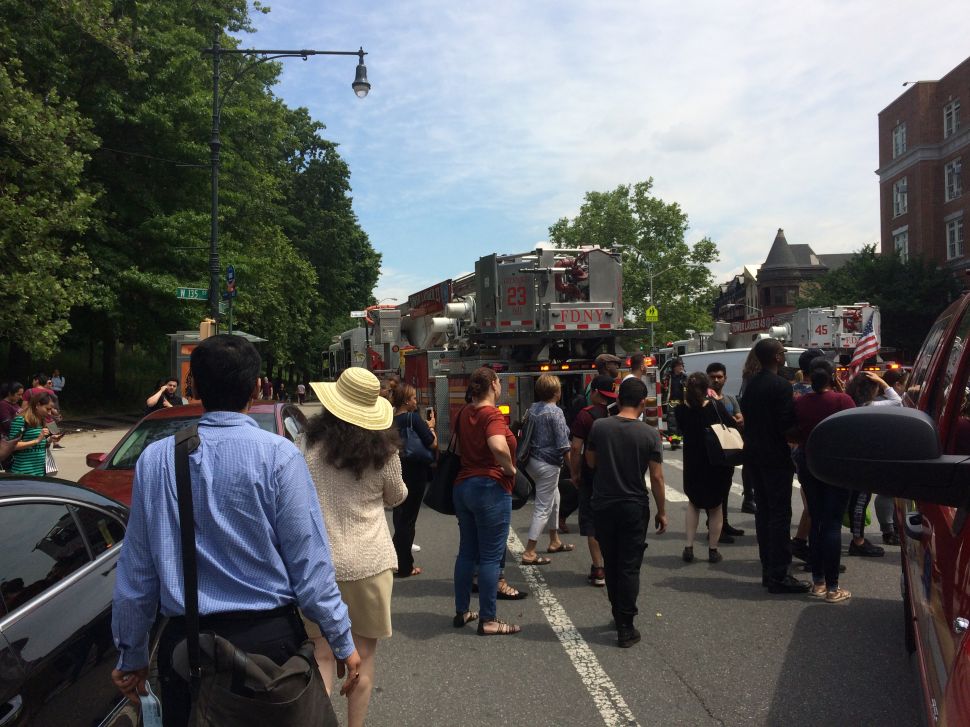