Nobody creates a wait-a-week cliffhanger better than those folks over at the Challenge. They’re like that episode of Entourage where Ari makes a movie trailer out of like six minutes of outtakes and sells the movie off that. The last time we saw Lolo Jones, she was about to go into elimination against tiny Tia Blanco. Lindsey Jacobellis got all amped up on the sideline, windmilling her arms and cracking her neck like the Key & Peele Hold Me Back episode. Right when they’re about to start it up, Lindsey is like “WAIT!” and she starts banging on the glass in the church screaming “Elaine” because she wants to go into the elimination instead of Tia. Except instead of screaming “Ben” back, Lolo looks at Wes, who is shaking his head, and she’s like “nah, I’m good.” Lolo makes the point that Lindsey had days to make the switch and she’s doing this now to shake up Lolo’s game plan. Lindsey accuses Lolo of backing down from a real challenger and after Lolo takes out Tia, who basically quits after Lolo puts the kind of hit on her that sidelined Lance Harbor so Johnny Mox got the starting QB job, Lindsey’s like “I guess you got the pass you wanted this week.”

All of this is the dopest kind of reality television. It’s twisty and cutthroat and has teammates fighting with each other. And yeah, I think you should use mental tactics to try and shake up the competition. And also yeah, you can’t trust anyone, even your team when elimination is on the line. But in fairness to Lolo, I also don’t think you should be able to see the elimination and then decide you want to go in for someone else. Part of the game is based around it being random, maybe you’re facing someone you could never be stronger than, and you get a puzzle and pull off an upset. It sets a bad precedent. Especially in a team game. If we send someone in and then see what the elimination is and it looks like they’re going to lose then let someone else volunteer because they have a better chance—it’s not fair. I mean if it was established at the beginning, it could be kind of a dope twist. Because then people would have to decide if they’d last minute risk their own safety for the good of the team. Wait, maybe I actually just talked myself into this. Producer Matt—call me, I’ve got ideas for sure. Nah though, it’d have to be established at the start, not midway through.

The relationship between Lolo and Wes is the best new friendship and Wes is also friends with CT now after all their drama. I don’t know how he became the most popular person all of a sudden but noChallenge is ever boring with Wes on it. He and Lolo go out for coffee and he gives her a coaching session because if anyone knows what it’s like to be singled out by your own team, it’s him. The firstChallenge Wes won, he was getting thrown in the elimination every week. And he was actively sabotaging his own team on The Ruins so nobody liked him there.

I like seeing all of the Champs and Pros going out and having fun together. This week they went to the batting cages and CT taught Louise how to approach a batter’s box. “Hit it hard and to the yard.” Louise’s growing appreciation for CT is awesome. Plus, if CT taught me how to hit a baseball, I’d be in the majors now like Rookie of the Year, except I’m 35 not 12. Jordan and Lolo talked about dating—Lolo mentioned the other thing that people know about her aside from her athletic career—that’s she’s saving herself for marriage. Jordan tries to give her some dating advice like “find the friendship” and she’s like come on dude, act like I haven’t tried all the kinds of dating by now. I ship Jordan and Lolo because they’re equally aggressive and annoying but also good at everything and likeable despite the first part.

The Champs won the challenge this week because it was a puzzle and Darrell was captain. CT and Kam were both lifting huge blocks of concrete with a rope so that their teams could see the pieces to a puzzle and then relay that information down to the others to reconstruct it. I would have been happy if the whole thing was just CT and Kam doing this to see who could hold on longer. They’d probably still both be there one hundred years later like Rip van Winkle but instead of nine-pin, it’s CT and Kam both refusing to let go for a century. Gus was the Pros captain so he automatically had to go in. The Pros created another three-way tie so Gus picked CM Punk. The Champs basically just had Wes and Jordan volunteer because Darrell was safe and they knew nobody was going to vote for CT. Jordan even voted for himself and Louie Vito was like “even you’re scared to say CT’s name.” CT is a magician who has put a spell on himself to make him simultaneously the most visible and invisible person on his team. Everyone is watching him but when it comes time to say a name, he’s Casper.


Before the elim, Cara Maria and Gus went out together and talked about what it was like for Gus to reveal that he is gay to the public. I’ve said it before, but I’m a big fan of these “hang out” moments. They’re a bit more like Real World than the Challenge but I like the way it helps you get to know the competitors a bit more. Gus has a dope story and it was cool to hear about. His boyfriend actually showed up to the elimination, which I think should also be illegal. Who is going to win, the person competing in front of their family or someone who is not? It’s so much extra motivation.

The elimination involved sticking your arms in a bucket of ice for a minute and then trying to solve one of those sliding tile puzzles you get in every goodie bag when you’re ten and dump out to get to the candy. Gus is a winter sports athlete which is such an unfair advantage, he probably bathes in ice because it reminds him of being on the slopes. CM Punk notices that everyone is rooting for Gus, probably because in the first Challenge he proved he was Spider-Man IRL when he pulled himself up on those ropes in the competition. Gus beats Punk and then Wes takes down Jordan with some sideline help from CT, his new best bud. No cliffhanger this week, but from the previews we know there’s a twist coming. 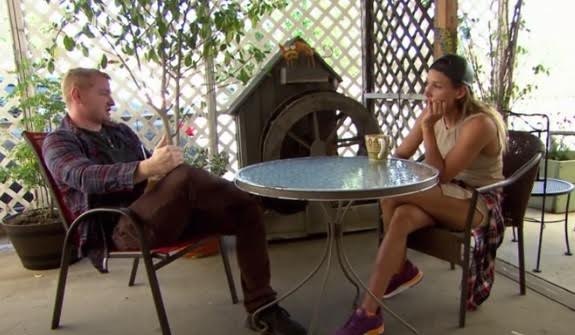