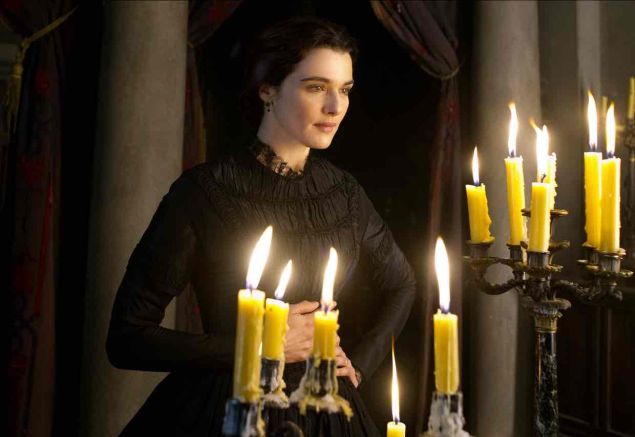 My Cousin Rachel, a far too anemic and restrained take on a story that demands at least some kind of dour sensuousness if not straight-up bodice ripping, is bookended by a question: Is she or isn’t she? These words first come from the perspective of young orphan Philip, left to the care of his uncle Ambrose in a sprawling manor house, whose lack of a woman’s touch is conveyed by a thick layer of dust and the pack of roving wolfhounds that occasionally dart through. Philip’s early 19th century childhood is idyllic, save for those bleak periods when he is forced to leave his simple estate life to attend school and when, for health reasons, Ambrose must escape the Southeast England winters for the warmth of Florence, Italy. There Ambrose falls under the spell of the mysterious title character, whose presence in the film is so hyped up before she actually arrives on screen that you half expect the part to be played by Bruce the Shark from Jaws. When Ambrose dies, Philip, now embodied by the blandly handsome young actor Sam Claflin, is convinced this female interloper is to blame.

This is all laid out in a brisk pre-title sequence that stands as one of the few times one can safely call My Cousin Rachel zippy. The film is structured like a Bizarro World rollercoaster, where the ascension happens in a snap but coming down takes forever. When Rachel finally materializes, not as the peg-legged crone of Philip’s feverish imagination but in the dark-featured and brightly smiling visage of Oscar winner Rachel Weisz, Philip’s anger and suspicion metastasize into a virulent from of desire. The potential sexual fire between them is meant to spark over bedside tea after Rachel instructs Philip to lick melted butter from his greasy digits. Unfortunately, both the film and the chemistry generated between Weisz and Claflin feel about as smoldering and lustful as a tub of margarine.

Part of the issue here is the source material. Already adapted by Fox (their little art house bro Searchlight takes the mantle here) in 1952 and starring Richard Burton and Olivia De Havilland, Daphne Du Maurier’s novel is famously a mystery unsolved. While it is possible for a movie to walk this kind of ambiguous line, it requires a tightrope as tight as piano wire. But that is not the case here, where run-of-the-mill tension is confused for true cinematic suspense. Claflin doesn’t help; the Pirates of the Caribbean: On Stranger Tides star seems overmatched by his character’s confusion and doesn’t command the presence to make Philip’s plight compelling. He is more effective in the first part of the film, when his character is driven simply by anger and revenge. You are confounded when – on his twenty-fifth birthday – Philip hands over his estate to Rachel despite her less than transparent motives. Then you are equally perplexed as to why you should care.

The film’s plus column includes Weisz, who finds much to play with in the joyful enigma with which she shares a forename. She is able to shift between being flirtatious, cagey, deadly serious, and morose with speed and grace. But here again writer-director Roger Michell (Hyde Park on the Hudson) undercuts her by hewing so close to the book: in never allowing Rachel to fully reveal herself, he has left his dynamic lead actress with several unfired arrows still in her quiver. Michell’s strength is in his ability to vividly evoke both the social dynamics and dust-caked, candle lit everyday life of Cornwall of the 1830’s. (You find yourself willing to trade Philip’s mother’s pearl necklace, which he offers to Rachel as a symbol of his devotion, for a box of Swiffers so you can have at the place.)

Unfortunately, Michell’s approach ultimately feels too polite for a story meant to veer between anger, lust, and madness; his approach to storytelling is never as messy as his sets, and it needs to be. And while his take may please fans of Du Maurier’s novel, as cinema it feels like a missed opportunity. Sure, you can make a period noir without revealing whether your central character is a femme fatale – just as you can make a gothic romance and not imbue it with gloom and sensuality – but what exactly is the fun in that? 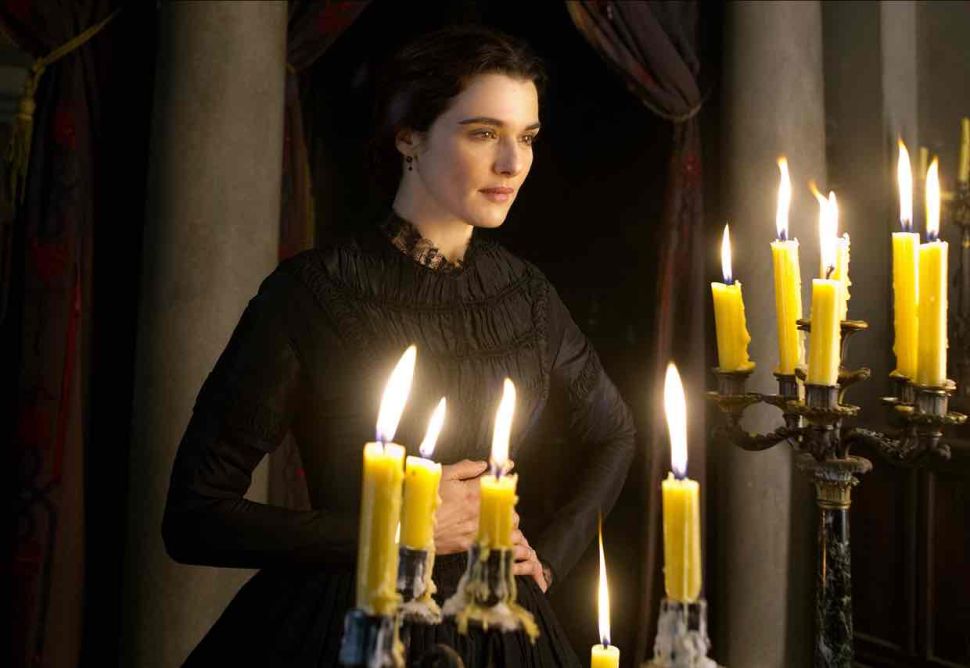