The revamped New York City Opera seems to have turned a corner this season. While the work the company is doing still can’t reasonably be called “good,” at least its failures, as typified by Saturday night’s performance of Angels in America, are getting more interesting.

The piece itself—the 2004 operatic précis by Péter Eötvös that is not the original Tony Kushner play—is perhaps most striking as an example of how difficult it is for European artists to grok American source material. The libretto by Mari Mezei seems drawn magnetically to the most obvious and melodramatic plot elements (and there certainly are moments in the play that border on soap opera) while sidestepping Kushner’s fascinating stylistic decision to make talking—nonstop, motormouthed, yammering, hyperbolic talking—the central action of his play.

This choice is particularly apt and moving because in the early days of the plague, talking was about the only thing anyone could do. With no clear path to a public health plan and seemingly no interest at all from the medical and governmental establishments, you could talk and you could help a friend wash off his shit, and that was about all there was.

But even these gestures are scrubbed from the Angels libretto: the key scene when Prior shits himself is as absent as Louis’s monologues. Angels minus the logorrhea is as anodyne as AIDS without diarrhea.

Eötvös is a solid composer and there are some good ideas in the score, chiefly a trio of offstage backup singers who now and then surround an onstage sung line with a sort of auditory echo. A nervous/horny electric guitar riff slithers through a cruising scene in Central Park, but that kind of specificity is rare: more often the music settles for being generically quirky.

What’s more concerning here is that this piece never quite rises to the level of an opera in the sense of assigning an expansive vocal gesture to a moment of heightened emotion. Even the grandiose rants spouted by Roy Cohn (bass-baritone Wayne Tigges) feel abstract, like sadistic exercises in forcing the singer to sit directly on his upper passaggio all night long.

Conductor Pacien Mazzagatti’s intelligent efforts in the pit were sometimes undermined by what seemed an underrehearsed sound design. Sam Helfrich’s stage production managed to make Angels in America seem safe and bourgeois, which is a feat in itself.

In this piece’s condensed dramaturgy, the focus falls insistently on the role of Prior Walter. Andrew Garland, who seems a serious and game artist with—on the rare occasions when Eötvös gives him something to sing—a handsome lyric baritone, is miscast in the part, too boy-next-door nice and (worse) too buff. His brief nude scene at the end of the first half of the opera reveals a rock-hard ass that has obviously never been near a wasting disease.

Kirsten Chambers flung out the high-lying declamation of the Angel with easy aplomb, and, in one of the production’s few moments of wit, does a striking visual imitation of the young Karita Mattila. (Man, could we have used a diva with that kind of pizzazz back in the dark days of 1985!) Tigges flaunted an admirable energy level, though vocally he seemed to be under the impression that he was appearing in a revival of Die Gezeichneten.

The rest of the cast worked hard, but the only singer who scaled the requisite peak of greatness was Sarah Beckham-Turner, ideally and aggressively querulous as the drug-addled Harper Pitt, and, later, delicately savoring her cold dish of revenge as the ghost of Ethel Rosenberg.

Ms. Beckham-Turner is both an artist and a star, and if NYCO knows what they are doing (a big “if” admittedly), the company will find something big and interesting for her to do in the very near future. 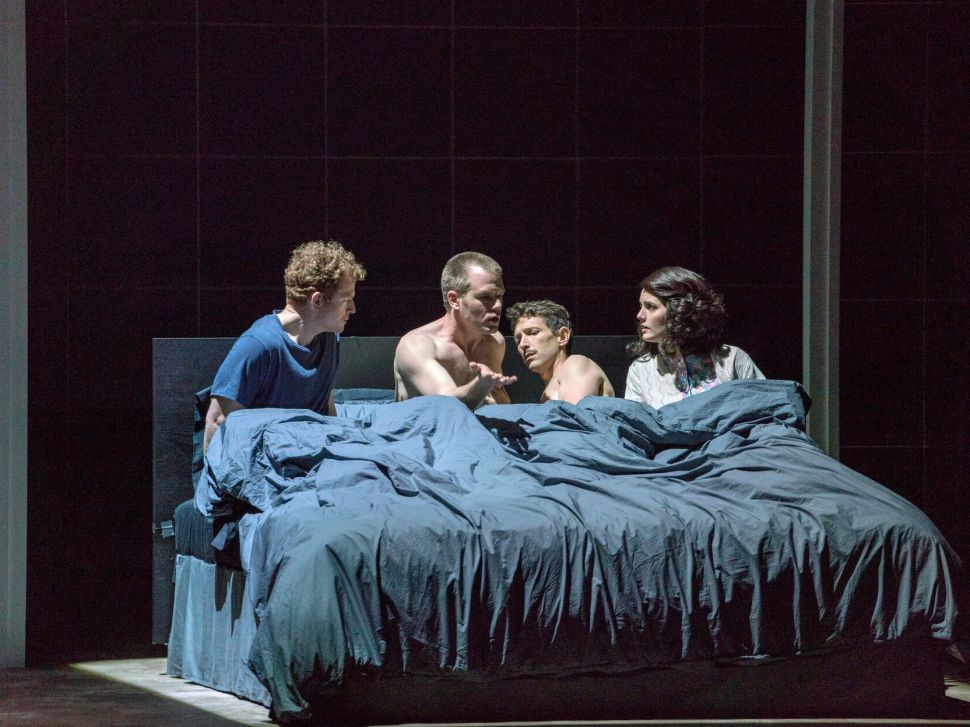