Staten Island Assemblywoman Nicole Malliotakis—the Republican frontrunner challenging Mayor Bill de Blasio—blamed both de Blasio and Gov. Andrew Cuomo for the current “transit crisis” in the aftermath of an A train derailment in Harlem yesterday morning. She said the mayor exhibited a “lack of leadership” by ignoring reporters’ questions about the incident.

Newly appointed MTA Chairman Joe Lhota—Mayor Bill de Blasio’s 2013 Republican opponent who Cuomo recently tapped to head the agency—told reporters on the scene yesterday that a southbound A train just outside of then 125th Street Station went into brakes emergency, with the emergency brakes automatically going on. The train bumped forward, then bumped backwards and in the process. Two of the train’s eight cars derailed and scraped the side of the wall.

Earlier today, Lhota announced that the preliminary investigation found that the cause of the derailment was an “improperly secured piece of replacement rail that was stored on the tracks,” attributing it to “human error, not a track defect.” He noted that NYCT is inspecting every inch of rail to make sure that every replacement part is “properly stored and secured.” Two MTA supervisors were also suspended without pay.

Malliotakis blasted de Blasio for ignoring questions from NY1’s Grace Rauh and other reporters about the derailment outside of a high school graduation ceremony in the Bronx.

Malliotakis told reporters, “I fault both of them for what is occurring in the MTA right now, the transit crisis, but when I saw that video of Grace Rauh asking the mayor and other reporters asking the mayor about a comment just to give some assurance to the city, to victims that were injured… It’s unbelievable that we have a mayor who would have a train derailment in this city and 34 of your citizens injured and you just walk by the media that’s trying to ask you for a statement. That, to me, it’s the biggest lack of leadership that I’ve seen from this mayor probably in three and a half years and that’s saying a lot because he has been a failure on so many fronts.”

During the Republican mayoral candidate debate hosted by Crain’s New York, she said that where the mayor has failed is planning longer term for the city and investing in infrastructure. She said she understands that Cuomo has more appointments than the mayor but said that de Blasio’s appointees “should have been using their bully pulpit to advocate” instead of just rubber stamping the MTA’s capital plan.

When a Newsday reporter asked Malliotakis about Cuomo’s responsibility given the the MTA is a state-run agency, she reiterated that the governor is to blame, too.

“Governor, too. I don’t know why he wasn’t reporting to the scene,” she said. “That’s what I don’t understand. They’re both trying to avoid this.”

Still, she has praised Cuomo’s appointment of Lhota, who recently endorsed her for mayor. She took to Twitter when Cuomo announced the appointment, calling him a “great pick” and asserting that “the guy who should’ve been #NYC mayor can now clean up the mayor’s subway mess.”

An MTA spokeswoman told the Observer yesterday that the agency is holding the Genius Transit Challenge, an international competition seeking innovative solutions to modernize and improve reliability of the city’s subway system, tomorrow and that it put together a six-point plan. Veronique Hakim, the MTA’s interim executive director, also announced last week at a board meeting that the agency is conducting a top-to-bottom review of subway delays.

The Twitter accounts of the mayor’s office and Cuomo were inundated with tweets from people wondering why they were not on the scene.

A spokesman for the mayor told the Observer yesterday that the mayor  had spoken with Lhota and said that de Blasio would monitor the situation as the probe continued. He also said that it is sometimes helpful to have the mayor on the scene but that in some cases “it serves little purpose,” noting that emergency responders and FDNY Commissioner Daniel Nigro were on the scene.

A campaign spokesman for de Blasio did not immediately respond to a request for comment.

The mayor indicated this morning that he plans to address the derailment and the subway’s problems at a press conference tomorrow. He told CBS 880 that the transit system has gotten worse because of all the aging infrastructure and that federal investment in mass transit has “constantly decreased.”

But he said that the governor “made a good move” by appointing Lhota, and said that “now we got to get to work—all of us—on a plan” to address the immediate crisis.

“There’s real resources at the MTA,” he said. “There’s a lot of capacity at the MTA. We have to figure out how we can all do better.”

In a statement released yesterday, Cuomo said that the derailment is “an unacceptable manifestation of the system’s current state” and said that with Lhota’s leadership, the MTA “will address the fundamental issues plaguing the transit system and overhaul the organizational structure of the MTA.” 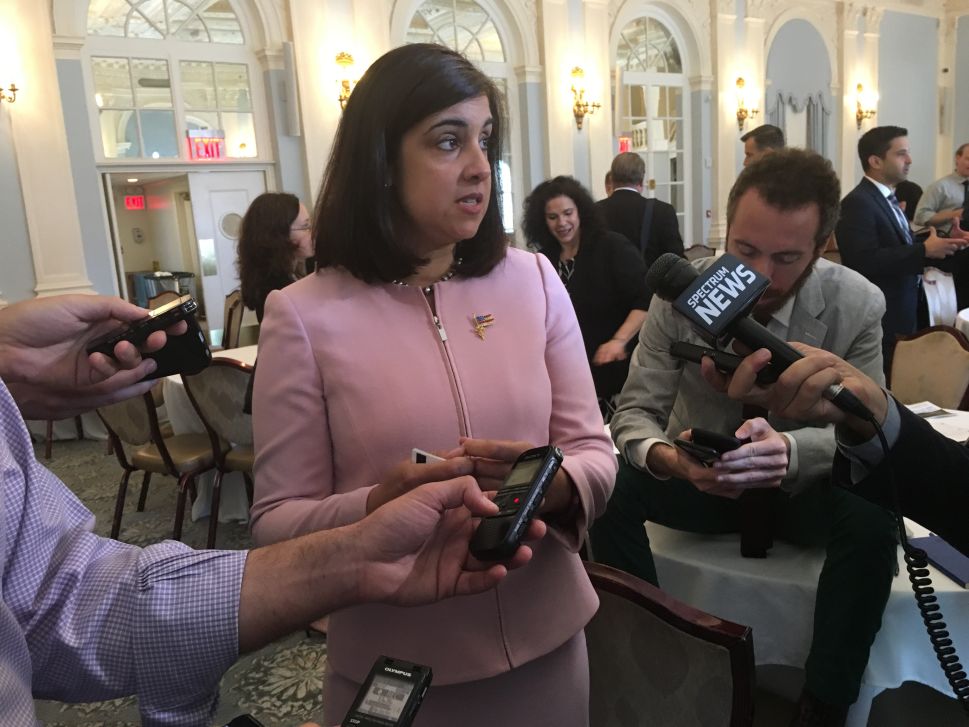