A last-minute barrage of TV ads featuring this year’s crop of gubernatorial candidates is taking over the airwaves, as Democrats and Republicans make their closing arguments to the primary voters headed to the polls on Tuesday.

In New Jersey, TV ads have long been the key to reaching thousands of voters at once. But it can cost millions of dollars to mount a real advertising campaign on the expensive New York and Philadelphia TV markets. So the campaigns think hard about the imagery and the messaging, to get the most bang for their buck.

Three Republicans are on the air and all of their ads steer clear from the sitting governor, Chris Christie. Lt. Gov. Kim Guadagno and Assemblyman Jack Ciattarelli do not focus on their stints in Trenton, and a political newcomer, engineer Hirsh Singh, casts himself as an outsider with a fresh approach to governing.

“The ads on the Republican side have the potential for some movement,” said Seton Hall University politics professor Matt Hale. “I think the interesting thing about this race is that nobody is paying attention, so these last-minute ads have the potential to create a first impression, and that is going to be the last impression.”

Jim Johnson’s and John Wisniewski’s ads have been pummeling Phil Murphy, the Democratic front-runner, highlighting his 23-year tenure at Goldman Sachs, the megabank that has long been the scorn of progressives.

But Murphy has been on TV for the last couple of years, spending millions of dollars on a range of different spots, first through his nonprofit New Start for New Jersey and then through his campaign. There’s Phil at the diner. Phil at a construction site. Phil in a conference room. Phil walking the streets. Phil at the park. Phil throwing a football. He doesn’t owe anything to the “insiders” and will never forget how a former boss stole from his paycheck when he was a dishwasher, he tells viewers.

“It would take one of the greatest political ads of the century to change the Democratic race,” Hale said. “There is no reason to have money left over after the votes are in. It is use it or lose it for all the candidates.”

Here’s a field guide to all the candidates’ TV spots.

The lieutenant governor’s first major ad campaign — the slogan is simply, “Better” — was released in early May, but the ad focuses on her past roles including her time as Monmouth County sheriff. Noticeably missing was any mention of her tenure in Trenton despite almost eight years as Christie’s second-in-command.

Ciattarelli’s primary ad strategy has been to paint a Guadagno governorship as a continuation of Christie’s time in office. Two weeks ago, Ciattarelli released an ad that said Guadagno had “failed” in her term as lieutenant governor.

Like Guadagno, his ads don’t focus on his current job: a state assemblyman for the last seven years. Ciattarelli’s ads claim that he will bring a new direction to Trenton.

Singh’s two ads — part of a $300,000 ad buy, according to his campaign — put his outsider status front-and-center. He acknowledges the fact he has never before held office and touts himself as a “problem-solver.” He also advocates trimming waste in the state. Singh’s ads are airing on both TV and radio.

Murphy has done a bunch of sleek, fast-paced ads alternately focusing on his modest background or his policy plans for New Jersey. Viewers can often hear the former Goldman Sachs banker who has spent $20 million on his campaign say he was “middle class on a good day” when he was growing up in Massachusetts. One ad called “Dishes” discusses his first job at 13. A recent ad focuses on education. His last ad of the primary cycle is an attack on President Trump.

One thing all of Murphy’s ads leave out is his long career at Goldman Sachs.

Murphy’s May 26 ELEC filing list over $2.8 million in “media placement” expenditures in 2017, although not all of it would be TV ads.

Johnson released a new ad last Thursday, a seven-figure statewide buy to appear on both digital and cable outlets. The ad starts out with U.S. Sen. Bernie Sanders blasting Goldman Sachs. It then cuts to Murphy and reminds viewers of the candidate’s long tenure with the company. Johnson’s ad also blasts Murphy for being a part of New Jersey’s “political machine.” (Murphy says in one ad that he doesn’t owe anything to the “insiders.”)

Like Johnson, an ad launched by Wisniewski in early May focused on Murphy, the high cost of his campaign, and his time at Goldman Sachs. By contrast, Wisniewski’s ads cast him as the anti-Wall Street crusader, a small business owner and small-town lawyer. A recent ad gives voters a choice: “Insider Wall Street politics or Main Street New Jersey values.” The ads are airing in both the New York and Philadelphia markets on both broadcast and cable.

Wisniewski also has reminded viewers of his role in the 2013 Bridgegate scandal that tanked Christie’s approval ratings. He was the co-chair of a legislative investigation integral in uncovering the scheme. 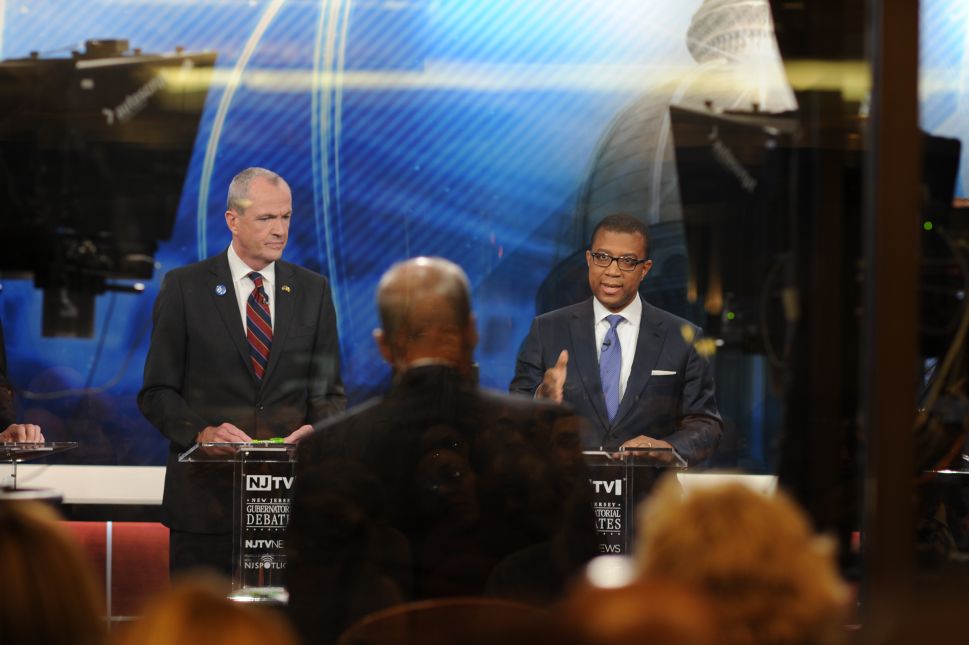