The primaries in the governor’s race will be ending on an acid note this year, as Democrats and Republicans flail their arms like windmills at each other in the final days, hoping to depress their respective voters from turning out.

On the Democratic side, former U.S. Treasury undersecretary Jim Johnson and Assemblyman John Wisniewski have been dropping a last-minute payload of negative TV ads on the front-runner, Phil Murphy, and offering reporters the remnants of their opposition research.

“During his time as president of Goldman Sachs Asia, Phil Murphy oversaw companies that forced workers to work seven days a week and face compulsory overtime in unsafe and toxic conditions for approximately $50 a month,” Johnson campaign manager Jocelyn Steinberg said in a news release.

According to the Johnson campaign, Goldman Sachs initiated the purchase of a Chinese manufacturer for Nike and Reebok around six months before Murphy took over the bank’s Asia division. The factory was criticized by human rights groups for risky working conditions and on-site injuries.

On the Republican side, Lt. Gov. Kim Guadagno’s last TV ad is an extended attack on Assemblyman Jack Ciattarelli’s tax plan. It would raise rates on high earners, but it would also scrap several other taxes. No matter. He is “High Tax Jack” in the Guadagno spot. “No surprise Jack usually votes with Democrats,” the narrator says.

Ciattarelli this week lambasted Guadagno’s record as a “job creator,” pointing out that the Christie administration’s strategy of ramping up corporate tax breaks has siphoned more than 1,500 jobs from Burlington County and moved them to Camden.

“Chris Christie’s lieutenant governor had seven years to fix things and failed,” he says in his TV ad. “Had enough? Me too.”

Johnson took some heat, too.

After Observer reported on a town hall he held in Newark on Tuesday, four people speaking on the condition of anonymity said around 100 senior citizens had been bused to the event, including one group in a van belonging to the East Orange Housing Authority. Since the authority receives federal housing funds, it is barred from participating in political activities under the Hatch Act.

“The housing authority doesn’t support or sanction any political candidate,” said Wilbert Gill, the agency’s executive director. He added that the authority only has one van at its disposal (it seats 13 people) and that he was not advised it would be used to drive people to Johnson’s event.

“We’re looking at that situation,” he said. “At this time it’s under review.”

The Johnson campaign, which has focused on ethics reform, disavowed any connection to the van.

“The event was highly publicized and open to the public … and the campaign was not involved with commissioning any Housing Authority vans to attend the event,” said spokeswoman Aleigha Cavalier.

And on and on it went.

A Facebook post by Murphy adviser Julie Roginsky was a big enough bale of hay for the Wisniewski campaign on Friday. After President Trump pulled out of the Paris climate agreement on Thursday, Roginsky wrote that it would “screw future generations” and sarcastically congratulated Bernie Sanders supporters who refused to vote for Hillary Clinton last year, such as Susan Sarandon.

“How dare you, Phil,” Keefe said. “Roginsky’s comments are proof the Murphy campaign holds the progressive movement in contempt.”

Feeling left out of the sandbox fun, perhaps, Gov. Chris Christie launched an extended attack on Murphy at a news conference on Thursday.

“He became a serious candidate for governor because he wrote checks to every man, woman and child who mattered in the Democratic Party to buy their support,” Christie told reporters. “Come on.”

The Murphy campaign declined to respond to Johnson and Wisniewski. Christie didn’t have a leg to stand on attacking Murphy’s integrity, Roginsky said Thursday.

Guadagno and Murphy have had double-digit leads in the most recent polling and are expected to win on Tuesday. But the negative attacks could depress turnout, said Monmouth University pollster Patrick Murray.

“It’s not about winning over undecideds but about depressing your opponent’s turnout,” he wrote in an email. “Negative attacks are designed to encourage soft supporters of the targeted candidate to stay home.”

It should be noted that state Sen. Ray Lesniak, a Democrat in the race, has been a perfect gentleman to everyone these last few weeks. He polled at 4 percent most recently. 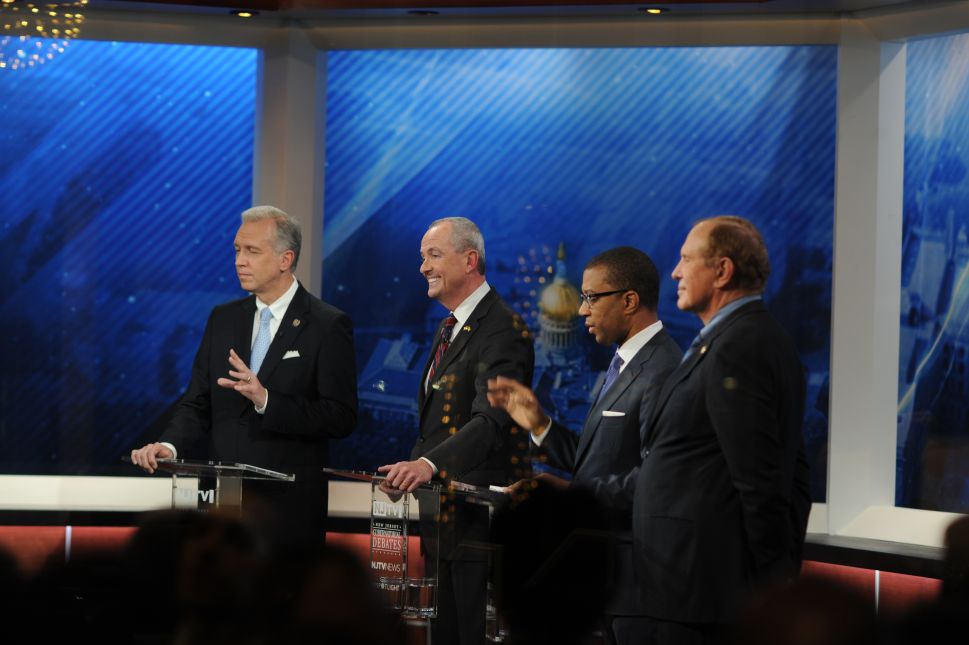