Murray, a career prosecutor who lives in Morris County, faced just one question and the committee unanimously advanced her nomination by a 10-0 vote. The full state Senate will vote on her nomination next Monday.

Murray has served as acting prosecutor since 2011 and was counsel to former state Attorney General Paula Dow in 2010. She also worked as an assistant prosecutor and counsel in the Essex County Prosecutor’s Office, and was chief of the public prosecution unit at the U.S. Attorney’s Office in Newark. Gov. Chris Christie nominated Murray for the Superior Court on May 9.

“I’ve had the opportunity to learn how to manage and ultimately lead the largest prosecutor’s office in this state, and I have to tell you I’ve loved every minute of that,” she told the committee. “I have genuinely found most appealing serving our various communities in our common community of Essex County and the state. If I were to be so fortunate as to be confirmed, I would pledge to you that I would devote those same energies to bringing my abilities and my desire to serve the public to the Superior Court bench.”

Senate Judiciary Committee Chairman Nick Scutari (D-Union) asked the only question to Murray: whether she would consider using the bench manual on jury selection. Murray said she would.

If Murray’s nomination is confirmed by the Senate, Essex County’s first assistant prosecutor can fill in as acting prosecutor until Christie names a new one. The governor has not announced a candidate to replace Murray.

Murray is a graduate of Georgetown University and New York University’s law school. 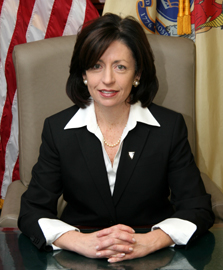