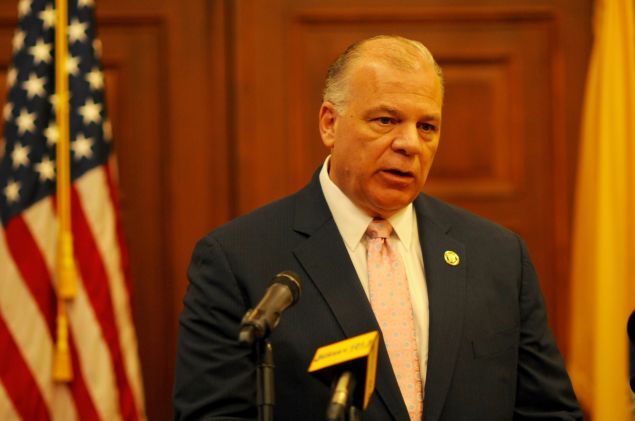 The Democrats’ new school funding plan hasn’t gotten the smoothest of rollouts, with Gov. Chris Christie sounding a skeptical note, lawmakers crying foul over towns that would lose out on funding and Senate President Steve Sweeney saying he would pay for it with a millionaire’s tax that Christie would never sign and that a new governor might not appreciate having to sign with Sweeney deciding in advance how to spend the money.

Meanwhile, new figures show New Jersey lost 13,000 jobs during May. And days after Bergen County GOP Chairman Paul DiGaetano said he wanted to unify the party after a mudslinging primary for the Senate seat in the 40th District, it turns out his plans for unity include a lawsuit against one of his foes, Sen. Kevin O’Toole, who accused DiGaetano of threatening to kill him.

Quote of the Day: “I’m not going to give him a budget blindly and not know what’s going to come out of it.” – Senate President Steve Sweeney

Sources: Port Authority to suspend search for new CEO
On Thursday, as the search enters its third year, Degnan is expected to tell the Port Authority board that he is suspending the search for a chief executive, according to two knowledgeable sources.
Dana Rubinstein, Politico Read more

Bergen GOP chairman sues O’Toole over death-threat claims
Even in the rough-and-tumble world of New Jersey politics, it was a claim that gave pause to many: Outgoing state Sen. Kevin O’Toole, asked about an odd rumor, said a rival once threatened to kill him.
Ryan Hutchins, Politico Read more

Rutgers appoints new leader for Board of Governors
A retired biotech industry entrepreneur will be the new leader of Rutgers University’s governing board.
Adam Clark, NJ.com Read more

Editorial: Immigrant recruits stuck in limbo
The history of new immigrants serving with distinction in the U.S. Armed Forces is a long one. Scores of people who have come to these shores have immediately felt the need to “give back,” and no other way of showing that measure of devotion comes through quite so sharply, so emphatically, as wearing the nation’s uniform and serving under this nation’s flag, its constitution and its institutions.
The Record Read more