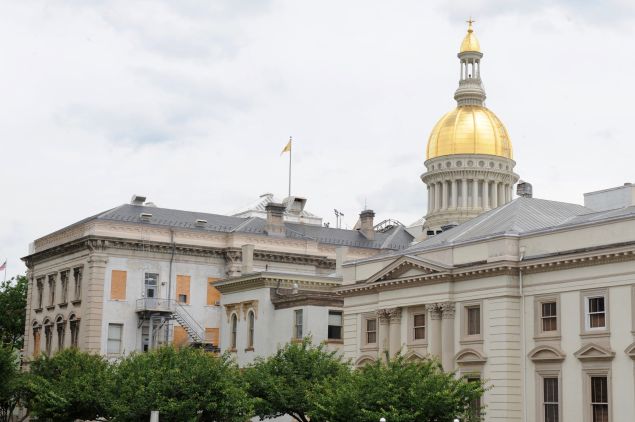 The New Jersey state house. Kevin B. Sanders for Observer

Democrats were plotting to oust Assembly Speaker Vincent Prieto on Wednesday unless he agreed to post a bill to restructure Horizon Blue Cross Blue Shield for a vote today. To oust Prieto would be a heavy lift, unseemly even by Trenton standards. A full six hours after Observer’s story, after a flurry of frantic phone calls among Democrats, it surfaced that one of the lawmakers reportedly at the center of the plot said she would have no part.

Quote of the Day: “At this time I would not want to oppose Vinny.” – Assemblywoman Eliana Pintor Marin

Senate Health Plan Would Cost NJ Billions
The U.S. Senate now appears unlikely to vote on the Republican healthcare reform plan this week, but opponents pledged not to slack their fight against a bill they said would cost New Jersey nearly $22 billion in federal funding over a decade — and some $60 billion during the next 20 years.
Lilo Stainton, NJSpotlight Read more

Frelinghuysen talks health care, other issues
Rep. Rodney Frelinghuysen, R-11, who did not address a group of protesters outside his Morristown office on Tuesday afternoon, engaged a much more receptive audience later in the day while hosting a telephone town hall.
William Westhoven, Daily Record Read more

Fewer are homeless in NJ, but the count comes with an asterisk
There may be fewer homeless people in New Jersey this year than were counted in 2016, but within that population there is a larger number who are considered “chronically homeless,” according to a survey that provides a snapshot of individuals and families without a stable place to live.
Jacqueline L. Urgo, Inquirer Read more

NJ Primary Spending Topped $42 Million, a State Record
The primary races for governor this year were the most expensive in state history, with candidates and independent groups spending $42.5 million, according to the state’s election watchdog agency.
Christian Hetrick, Observer Read more

NJ Senate Panel to Weigh Expansion of Transparency Laws
A stalled effort to update and expand New Jersey’s transparency laws will be heard by the Senate budget committee on Thursday, reviving hopes for a pair of bills from Senate Majority Leader Loretta Weinberg (D-Bergen) after a setback in 2015.
Alyana Alfaro, Observer Read more

Boardwalk games: NJ inspects to see if they’re fair
Do you think the games on the boardwalk are fair?
On Wednesday, state inspectors were on the boardwalk in Point Pleasant Beach to make sure game operators and retail establishments were playing by the rules. In recent weeks, they have made the rounds here and in Seaside Heights and discovered 20 locations with alleged violations. It’s part of the state’s Safe Summer program.
David P. Willis, Asbury Park Press Read more

Hoboken mayoral field includes 3 council members and a freeholder
With Mayor Dawn Zimmer having rocked the local political landscape by bowing out of her bid for re-election, Hoboken’s November mayoral race is a wide-open contest whose declared candidates now include four elected officials already representing the city in one way or another.
Steve Strunsky, NJ.com Read more

Editorial: Poor kids are under attack by Congress. Will Christie pile on?
Apparently, this still needs to be said: Just like having a congenital heart defect or childhood leukemia is not a choice, neither is being born to poor parents.
Star-Ledger Read more