Mayor Bill de Blasio said that if the Metropolitan Transportation Authority doesn’t fix the problems plaguing New York City’s subway system, he’d prefer that the city take over responsibility of it—and called on both the MTA and Gov. Andrew Cuomo to present a plan to the city to address the “mounting” delays, disruptions and public complaints.

Delays and breakdowns in the massive transit system have swelled to the point of crisis in recent months, with both the mayor and the governor blaming long and systemic disinvestment—though the rival Democrats have both demanded the other cough up more funds for new cars and repairs. The mayor rode the uptown C train from Penn Station to the American Museum of Natural History yesterday, according to the New York Times, noting that his last subway ride was on April 19.

A day later, he suggested that the city take the train system if the MTA does not step up.

Last month, the MTA released a six-point plan to tackle the fundamental issues bringing about delays, which entailed more testing of tracks and signals and putting extra cars into service more quickly. The governor appoints the entirety of the authority’s 17-seat board, though he handpicks just five members, the chairman and the CEO.

The mayor nominates four members, while county executives in the surrounding suburbs pick the remaining voting members. The governor has insisted it is the city’s responsibility to contribute more to the system, while the mayor has maintained that it is a state entity essentially under state control.

De Blasio told reporters at a press conference on his 10-year plan to create 100,000 middle-income jobs that availability of money is not a problem, pointing to the city’s $2.5 billion annual contribution. He said that he has focused on “a lot of the other things that I wanted to focus on,” including the jobs plan—but now he’s ready to turn his attention to the MTA.

But he stressed that it’s not because he buys “into the notion that we have to invest more,” saying that the MTA has a lot of money and that the focus should be on “changing the approach.”

“The number one thing by far the MTA does is New York City subways, but they do not use our money in any way that is consistent with the reality of the ridership,” he said. “And so we need to rebalance that situation and that’s what I will be working to do. So I think a lot of the money is there. We need to use the money on the subways.”

De Blasio identifies municipal matters like policing, education, public housing and public hospitals as “my responsibility,” saying that he would not expect help from the governor or the president.

He said that he has no problem with the governor working on projects such as rebuilding LaGuardia and John F. Kennedy International airports—though reiterating, when asked by a reporter, that those are Port Authority projects—cashless tolls, the Long Island Railroad and Metro-North, calling them “fine things” and insisting that he’s not saying that those other areas of spending are not important. He did, however, question the timing of those investments.

He called on the MTA to reallocate resources and focus on the areas “where the problems are the greatest.”

“That’s where you have a plan,” he continued. “And so my message to the MTA and the governor is, show us the plan. I don’t think anyone anticipated the fullness of this problem. I’ll be very fair. I think a lot of the other things the governor is working on are great things but now we got a new problem on our hands and we need a plan.”

The governor’s office struck a conciliatory note, echoing Cuomo’s recent claims that the installation of a new signal system and the acquisition of new train cars will likely take years.

“For many years, it was a budget fight and money is scarce and the MTA will say their capital needs were underfunded,” said spokesman Jon Weinstein. “The state stepped up big time last year, we have a $32 billion capital plan—the largest in history. The problem now is how fast can you do the work?”

The MTA, on the other hand, lashed out at the mayor—asserting again that the city must put up additional dollars to help run the system.

“There is no mystery to maintenance—it’s funding,” said spokeswoman Beth DeFalco. ” We have the plans, but we need the money and we need the city to pay their fair share of operating funds because their shortchanging mass transit is shortsighted for New York.”

The operating funds, which cover the labor expenses and other day-to-day costs of keeping the MTA functioning, are separate from the capital funds which underwrite construction and repair work.

In October 2015, after weeks fighting over how much the city and the state should each fund the MTA, the two Democrats finally reached an agreement in which the city agreed to pay $2.5 billion. In exchange, the MTA would consult the four members of its board appointed through the mayor’s recommendation about construction and maintenance projects in the five boroughs and seek advice from members from suburban areas about work in the surrounding counties.

The state’s contribution remained at $8.3 billion, and the cost of the plan was dropped from $30 billion to $26 billion—and the MTA said it would look into ways to save money and integrate private dollars. 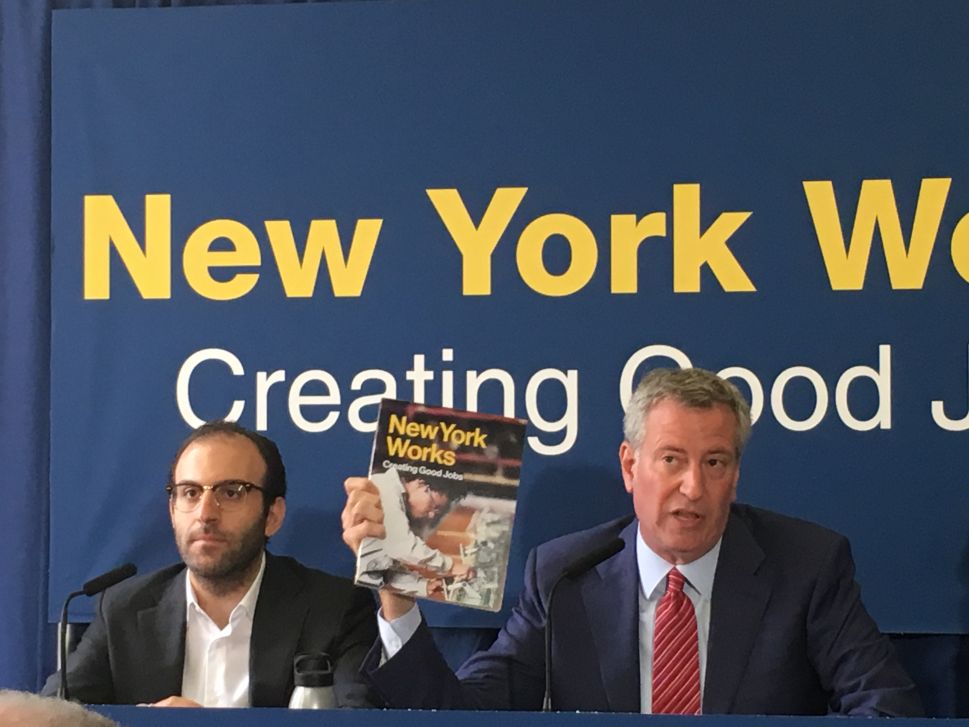