Arne Duncan, who led the U.S. Department of Education under former President Barack Obama, warned today that “harm would be done to children” should Gov. Andrew Cuomo and the State Legislature allow Mayor Bill de Blasio’s control over the city’s schools to lapse—and urged the feuding factions to forge some kind of agreement that will allow the system to continue.

Gov. Andrew Cuomo and Republican State Senate Majority Leader John Flanagan have both advanced proposals that would continue the city’s 15-year-old receivership of the municipal education system but include provisions lifting the cap on new charter schools in the five boroughs. Democratic Assembly Speaker Carl Heastie, who has close ties to teachers unions, has balked at the latter notion, leading to a game of brinksmanship as the program and the Albany legislative session expire this month.

Joining de Blasio on a press call this afternoon, Duncan insisted that the mayoral control system has both led to improvements to local schools and created a rare kind of electoral accountability for educational performance.

“If we were to lose mayoral control in New York, for whatever reason, I think it’s unquestionable that harm would be done to children, and that remains untenable,” he said. “So whatever the political issues are, I count on politicians of good will to find a way to resolve them.”

Duncan gained a reputation as a supporter of charter schools both as Education Secretary and in his previous role as CEO of the Chicago Public School system. In response to a question from the Observer, he confessed he was unfamiliar with Flanagan and Cuomo’s proposals—but called for lawmakers to reach an accord on the issue.

This stance actually put Duncan at odds with de Blasio, whose office organized the conference call with the media. The liberal Democratic mayor has lavishly praised Heastie, the holdout on the charter school issue.

“There’s ample room for additional charter schools over the next two years,” de Blasio said. “This is not something where Albany needs to intervene. If it ain’t broke, don’t fix it. There’s not a need on a numerical level to do anything for certainly the next year.”

“The problem is not that there’s a ceiling right now that’s holding back the growth of charter schools,” he continued.

Duncan’s policies at the federal level earned him enmity from both sides of the aisle. His support for charters outraged teachers unions, while his promotion of the Common Core curricula and testing standards irked conservatives.

Should the governor, Assembly and State Senate fail to reach a consensus by the month’s end, control of the city education system would revert to the old community school boards—widely criticized for their uneven, inefficient and decentralized structure. This happened briefly when the first receivership ran out in 2009, and the then-Democratic State Senate initially refused to grant then-Mayor Michael Bloomberg an extension.

Bloomberg eventually won a five-year renewal of the program. De Blasio, with his fractious relationship with Cuomo and the State Senate Republicans, has never obtained more than a one-year continuation of mayoral control. 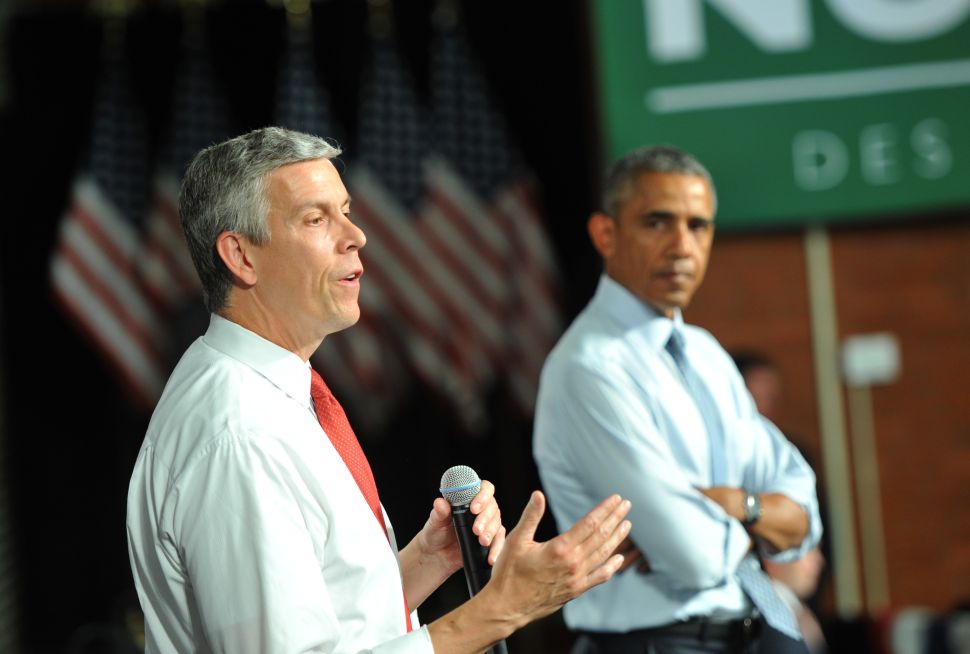