Kim, 34, is a Rhodes Scholar who served as the point man for Iraq and then ISIS on Obama’s national security council. A career public servant and diplomat, Kim was also on the ground in Afghanistan advising Gen. David Petraeus and then Gen. John Allen.

But he is hoping to make the race a referendum on MacArthur and his central role in writing the American Health Care Act, a deeply unpopular proposal to rewrite Obama’s signature legislative accomplishment, the Affordable Care Act.

“I’ve had literally thousands of people all over the country reaching out to me because they know MacArthur’s plan doesn’t just hurt the people of the Jersey 3rd, it hurts people all over this country,” Kim said in an interview Monday.

“Nobody voted to send a representative to Congress to gut health care.”

According to the nonpartisan Congressional Budget Office, the AHCA would reduce the federal deficit by $119 billion over 10 years — and it would eliminate coverage for 23 million Americans, including 470,000 in New Jersey.

Republicans, meanwhile, signaled that they will make the race about Obama’s checkered record handling ISIS, which grew and captured key Iraqi territories under his watch, if Kim is the challenger. The group in recent years has claimed credit for several major terrorist attacks and is now considered the top global terrorist threat.

“Under Andy Kim’s watch, the United States failed to grasp the threat ISIS presented to the world and failed to formulate a strategy to stop them,” said Chris Martin, a spokesman for the National Republican Congressional Committee. “If that’s what Kim considers a record of success, what does failure even look like?”

MacArthur has defended the Republican health care plan amid a relentless and ongoing blowback, arguing that he couldn’t sit idly by as consumers got stuck with rising premiums and as health insurers started fleeing health care marketplaces created by Obamacare.

“I am trying to save a system so it continues to help you,” MacArthur said last month at a marathon town hall in Willingboro after the AHCA passed the House.

Kim said congressional Republicans are not really fostering a debate on health care so much as rushing bad bills through without public input or independent vetting by experts.

“We don’t need a process that rushes this, doesn’t have any public hearings, doesn’t listen to the expert opinions of any medical associations and any other group,” he said. “We moved forward with this process without having a CBO score. What happened was it became this hyper-partisan issue and it became this game.”

A Korean American son of immigrants who grew up in Marlton and moved back this year, Kim will be a first-time candidate running against a well-funded incumbent. MacArthur, who made millions in the insurance business, self-funded his first campaign in 2014 to the tune of $5 million. President Trump hosted a fundraiser for the Republican congressman earlier this month that raised more than $800,000.

Kim said he has received “strong encouragement” from the Democratic Congressional Campaign Committee. And an online crowd-funding effort for the exploratory phase of his campaign quickly blew past its $50,000 goal with donations from all over the country.

It will help, he said, that MacArthur has become an emblem of the AHCA, which he and others expect will nationalize the race. Not only are national Democrats targeting MacArthur, New Jersey liberal advocacy groups and unions — which have boots on the ground and organizing know-how — also have a target on the congressman’s back.

“Congressman MacArthur isn’t in Washington to decorate a fancy chair,” said MacArthur campaign spokesman Chris Russell. “He is determined to confront and solve serious problems, including the failed Obamacare law that has caused premiums to skyrocket and decimated consumer choice.

“As for Andy Kim running on the health care issue, if he is as much of an ‘expert’ on health care as he was when advising President Obama on ISIS in Iraq, voters in Burlington and Ocean Counties would be wise to keep him on the JV Team.”

(Islamic State fighters took the Iraqi city of Fallujah in 2014. In an interview with the New Yorker magazine around that time, Obama seemed to dismiss the combatants as a junior varsity team and said the dominant terrorist group at that time, al-Qaeda, had been decimated under his watch. “If a JV team puts on Lakers uniforms, that doesn’t make them Kobe Bryant,” Obama told the New Yorker.)

The 3rd District — home to 150,000 Democrats and 140,000 Republicans, according to state voter registration records — is one of the few swing districts remaining in the country but has not gone for a Democrat since former Rep. John Adler left in 2011.

One of the area’s central economic engines, Kim said, is Joint Base McGuire Dix Lakehurst. He said that aside from health care, tending to the base’s needs and creating “good paying jobs” would be a priority. And he criticized MacArthur for giving up a seat on the House Armed Services Committee and getting seated on the Financial Services Committee, charging that the Republican wanted to “get closer to Wall Street.”

“I’m not rich and I believe that that perspective has helped me understand the people in the Jersey 3rd,” Kim said.

Trump, who is rich, won the district in November over Hillary Clinton after promising to “repeal Obamacare” at every campaign stop.

Kim said voters in the 3rd District understandably were frustrated because their own earnings have stagnated as other parts of the economy have experienced huge growth in recent years.

His message to Trump voters? “They got sold a bunch of promises that are not being kept,” he said. “What he told them about repealing Obamacare — what they’re doing is going to make it even worse for the people of the Jersey 3rd.”

Kim is married to Kammy Lai, a lawyer at the Washington, D.C., law firm Shearman and Sterling. They have a son and another child on the way, Kim said.

Kim is the first Democrat to announce a campaign in the 3rd District, but there may be others. Farther up north, several Democrats are lining up to challenge Rep. Rodney Frelinghuysen (R-11), a 22-year incumbent and the only other New Jersey member of Congress to support the AHCA.

A former Navy helicopter pilot and federal prosecutor, Mikie Sherrill, has jumped into that race as a Democrat. Assemblyman John McKeon (D-Essex) and Passaic County Freeholder John Bartlett have met with the DCCC and may get in that race as well.

In a sign of how seriously Frelinghuysen is taking the midterms, the congressman has hired Mike DuHaime, the political consultant who led Gov. Chris Christie’s campaigns, Politico reported. 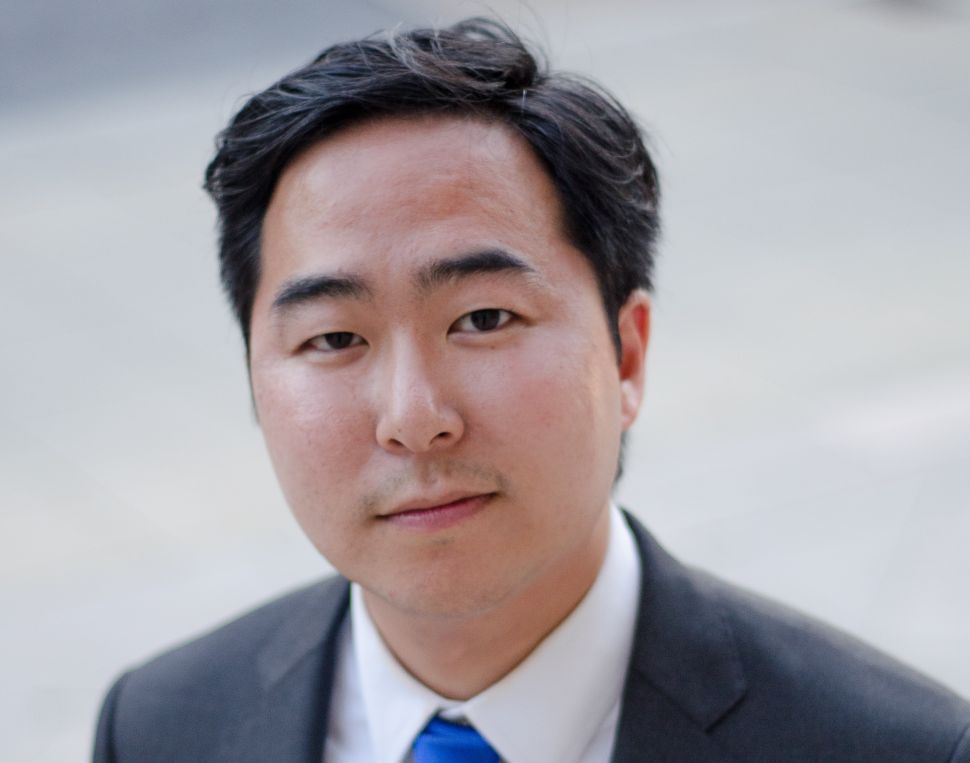