When Orange Is the New Black first debuted in 2013, it was a groundbreaking show that dealt with serious issues—llike transphobia, homophobia, sexual assault, the prison industrial complex, racism and misogyny. It was the first show that proved Netflix could break boundaries without completely destroying them. The show won instant critical acclaim, several Emmys, and attracted a gigantic audience.

Seasons two and three proved the show was no fluke. Even though Piper (Taylor Schilling) and her ex-girlfriend Alex (Laura Prepon) are separated for most of Season 2 (their torrid affair in Season one was one of the highlights), another relationship between prison guard Bennett (Matt McGorry) and Daya (Dascha Polanco) gets dramatic as their love child’s birthdate comes closer. We also learn more about the corruption and money laundering within the prison system. Most importantly, the show dealt with sexual assault of certain female characters in brutally honest ways, which the show betrays in the fifth season.

The first three seasons made very creative use of flashback scenes, which have always been a part of television dramas. However, OITNB took the concept to new levels as the scenes showed how the characters ended up in prison. Flashbacks were as prominent as the present-day scenes. However, these special scenes started to lose their touch in Season four and become almost intolerable in Season five. In fact, they now feel as if director Laura Prepon is just trying to fill up space and time.

The fifth season starts with Litchfield in prisoner takeover mode. Daya (Dascha Polanco) is pointing a gun at guard Humphrey (Michael Torpey), who tries to plead with her in Spanish, which she doesn’t speak. Daya shoots Humphrey in the leg, and he bleeds profusely. Instead of being an intense moment, it feels somewhat like dark comedy. The scene is supposed to shock, but the prisoners kicking the bleeding guard as he moans in pain feels more like a SNL skit.

There is a more serious issue with Season five: Its revenge plot is taken too far, even though we know the victims were quite brutal in Season four when the roles were reversed. Are we supposed to laugh at the abuse of the (mostly male) prison guards as they are physically and sexually assaulted throughout the season? The scene in the second episode where the male guards are stripped almost naked and sexually humiliated while their cavities are “inspected” is shown in an almost comical way. However, it should be just as offensive as all the scenes where the female prisoners are sexually abused by the male guards.

Are viewers supposed to enjoy this because their “straight male privilege” is being turned around on them? One may consider this criticism as part of the special snowflake syndrome, but sexual abuse against men is a serious and hidden issue in our society. Yes, it’s done by women, but a lot of sexual abuse against men is done by other men, who may feel more empowered after watching main characters on OITNB do so.

Another problem with Season five is that the show wants to be political, but it finds no middle ground. If the writers wanted to bring more people to the “Black Lives Matter” movement, they failed by playing it either too safe or taking the plot to unnecessary extremes. If the writers had continued to make us feel sympathy for the prisoners despite all their flaws, the results could have been different.

However, as much as OITNB takes the wrong path, it’s not a deadly one. Starting with Episode 8 (“Tied to the Tracks”), the show takes a dramatic and worthy return that allows some of the actresses to give their best performances to date. Uzo Aduba continues to give a spastastic performance as “Crazy Eyes” Suzanne, especially during the scene where she gets tied to the bed by other inmates—this hits like an emotional gunshot, even though we are already used to her emotional outbursts. Dascha Polanco’s performance throughout the season as Daya somewhat withers, possibly due to the direction she is given. However, the scene where she calls Pornstache’s mom and asks her to adopt their daughter as her own is compelling and shows the best of Polanco’s talents.

As others have noted, the knockout performance of the season belongs to Danielle Brooks, who plays Tasha “Taystee” Jefferson. She leads the prison rebellion after her best friend Poussey Washington was unnecessarily murdered at the end of Season 4 by a rogue prison guard. She is determined to right the wrongs and is especially effective when trying to negotiate with the Litchfield warden Joe Caputo (Nick Sandow) and his former assistant Natalie “Fig” Figueroa (Alysia Reiner).

The final scene where 10 of the inmates (including Taystee, Suzanne, Nicky, Piper and Gloria) hiding out in the old pool area hold hands and agree to do what is necessary before an explosion knocks the door in is both powerful and heartbreaking. It doesn’t take away from the major mistakes made in Season 5, but at least it provides a possibility of the show’s resurgence for Season six. By the time OITNB arrives at its series finale, Season 5 will hopefully just be a blip on the overall meter. 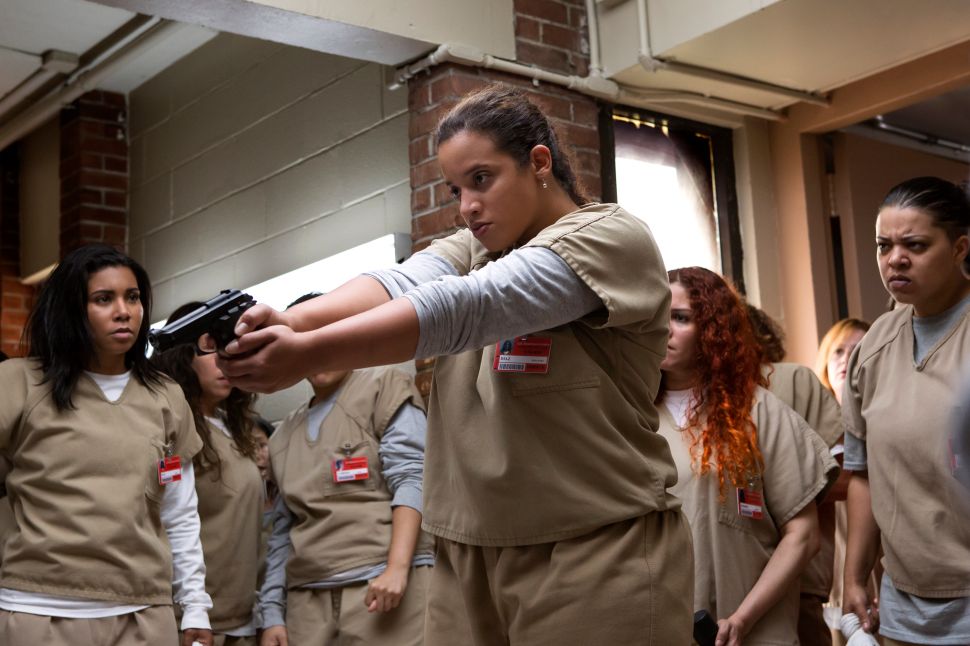