Between 1692 and 1693, a group of young women drummed up sensational public hysteria over accusations of witchcraft in the New England town of Salem which resulted in the executions of 20 people. The Salem Witch Trials, as they are widely known today, remain a fascinating and dark part of U.S. history, laden with accounts of fits in the courtroom, torture by way spells, and very real violent public deaths on Salem’s Gallows Hill.

On June 15, a rare original piece of evidence from the 17th century saga sold at Christie’s auction house in its sale of books and manuscripts from the single-owner collection of Eric C. Caren. The deposition of Mary Daniel, one of several girls who claimed she’d experience fits and strange bodily sensations as the result of witchcraft, sold for $137,500—a world record price for any artifact from the Salem trials.

The document features detailed descriptions of Daniel’s possession, which she credits to sorcery by the elderly widow Margaret Scott. Daniel’s account, dated August 4, 1692, was ultimately convincing to Salem’s judges, who condemned Scott to death, along with seven others, on Gallows Hill on September 22.

“Original material from the Salem Witch Trials is very rare in private hands,” Christie’s senior specialist in books and manuscripts Christina Geiger said in a statement. “It is a chilling experience to read this document aloud, just as it would have been read aloud at Salem Court during Margaret Scott’s trial over 300 years ago.”

Daniel describes her symptoms in the deposition by saying:

I was taken very ill again all over & felt a great pricking in ye soles of my feet, and after a while I saw apparently the shape of Margret Scott, who, as I was sitting in a chair by ye fire pulled me with ye chair, down backward to ye ground, and tormented and pinched me very much, and I saw her go away at ye door, in which fit I was dumb and so continued till ye next morning, finding a great load and heaviness upon my tongue….

Daniel converted to Puritanism in 1691, and is believed to have been a servant to Rowley, Massachusetts minister Edward Payson, according to Christie’s. Meanwhile, Scott, who is the only person Daniel definitively names among her tormentors, had already been the subject of gossip within the community for being left widowed, childless and poor.

The sale, which continues today, also features a selection of other rare first-hand account, such as a description from a 7th Cavalry chief, who claims to have discovered George Armstrong Custer’s body at the scene of Custer’s Last Stand on June 28, 1876; that item sold for $40,000. And a rare public notice, or handbill, distributed by London police in 1888 after two murders in Whitechapel during height of the Jack the Ripper scare sold for $35,000. 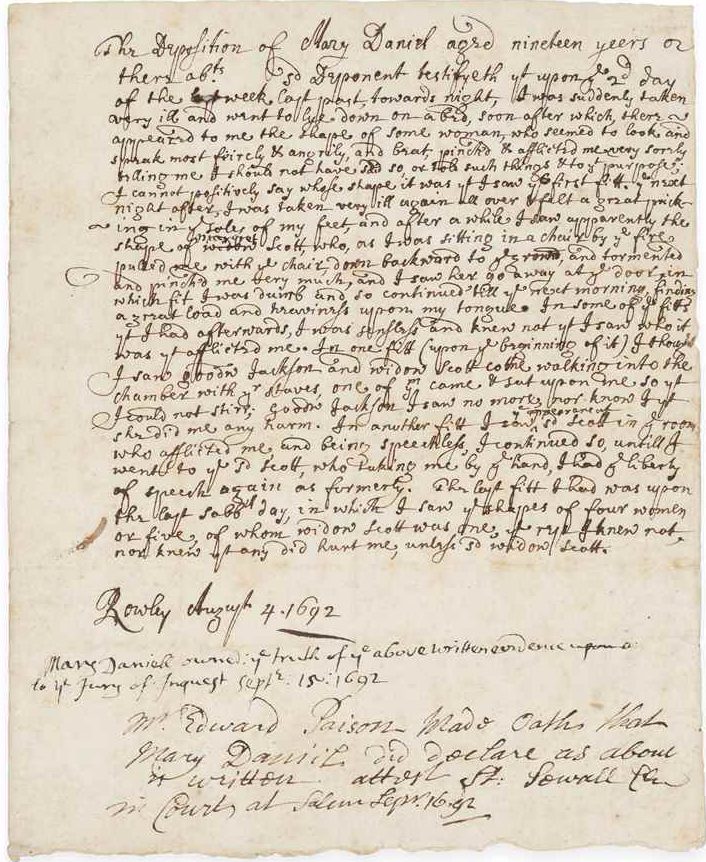