For Sarah, it’s always been all about Kira. Everything she has done, all of the running, the hiding, the subterfuge and the suffering, it has all been to keep her child safe from those who would use her for their own Neolutionist ends.

In a way, the whole show seems to revolve around this one small kid. When the clone sisters are separated, Kira is somehow connected to all of them, on some psychic level she does not yet understand. (She even seems to sense the ones Sarah & co. haven’t met yet.) And of course her DNA was the source of Cosima’s cure and could be the key to perfecting human cloning, which is why everyone quite literally wants a piece of her.

At the same time, though, Kira hasn’t been much of a character on the show, except as someone the others interact with in their various shades of maternal feeling. She’s sweet and smart and kinda spooky, but hasn’t been given much interiority, remaining mostly a core element of the plot than an emotional person.

But now Kira is growing up. She’s starting to separate her own desires from the life she has always been told she must live to stay safe. No longer content to be a plot device, she is growing into a person, with devastating consequences for Sarah. Because she knows Kira is right: In the end she’s going to have to let her child live her own life, even if it goes against everything Sarah has been fighting for.

That’s why at the start of the episode, the Kira vision Sarah keeps having every time she is faint or unconscious changes its tune. Instead of “You have to wake up,” Kira tells her, “You’re gonna have to let go.” And then Mrs. S is there, saying “You need to listen to her,” much as she will do at the episode’s end.

This time, Sarah wakes in a holding cell at Dyad, her wounds treated and a venom-spitting Ferdinand watching her through a window. He lets her speak to Alison and Cosima, to show her they’re safe and being held peacefully under the watchful eye of Neolution. They want to offer a truce: Everyone lives in harmony, nobody hunts the clones anymore, Cosima works with them to find a cure for their disorder, the war ends.

In exchange, though, they want to be able to examine Kira once a week to learn about her unique biology. From Rachel Duncan’s perspective this is a very generous offer. After all, they already have Kira in custody and could do whatever they wanted without asking. But this would make it all legitimate, Sarah and Kira could go back home, Kira could go to school, everything would be normal except for one small noninvasive checkup a week.

As soon as she makes the offer, of course, Sarah flips out on Rachel, throwing her offered tea across the room. And it is hard to blame her, seeing as she has never had any reason to trust Rachel or Neolution.

But then Siobhan and Kira come and tell Sarah that she should take the deal, that it is a good one, and Sarah relents. Or at least she does until they get home, where she discovers that Mrs. S was also just going along with the idea for the time being until they can find a way out.

It’s worth wondering why everyone is so sure this is a bad deal: Sure, Neolution is scary and devious and periodically evil, but the sisters are going to have to work with them anyway. Cosima has already thrown in her lot with them to find a cure, they have a cop stationed in Alison’s house who has no compunction about killing Art, and to all appearances the deal to keep it to weekly noninvasive exams seems legit. But then since it has always been about keeping Kira out of their hands, it continues to be so.

Mrs. S’s spy network is compromised, but luckily they have gotten in touch with MK, who has a network of her own. They plan to spirit Kira away after school, when Rachel is supposed to pick her up for her first exam, and MK’s people will sneak them underground. Sarah dresses like Rachel, picks Kira up, they do a secret handoff to Mrs. S and voila, they’re gone scot free.

But MK is sick with the same disease Cos has, and Sarah is determined to bring her into the fold and help her get well. When she declines, Sarah drives off to find her, and Ferdinand follows. MK refuses to come with her, but offers to trade places with her to slow Ferdinand down. Sarah flees and MK puts on the Rachel costume—a huge mistake. Ferdinand is fuming with anger and sexual frustration because Rachel is no longer reciprocating his S&M advances ever since her spiritual awakening upon meeting P.T. Westmoreland (rather clumsily underlined for us by the fact that she meditates now).

Now Ferdinand is faced with the woman who stole his fortune, but with the face and clothes of the woman who has rejected him sexually, and it is just a perfect storm. Already an unhinged guy, he now has a total breakdown and takes his double revenge, killing MK in what is perhaps the most grotesque murder scene I have ever seen on television (and I loved Hannibal).

Kira, who was already skeptical of the whole plan to go underground, feels the disturbance in the force, realizes that MK has died, and digs her heels in. Her mother tries to reassure her that MK is fine, which only makes it worse: Adults have been lying to her her whole life, hiding the truth from her about what she is. And now she is losing any chance of ever being a normal kid again. Rachel is offering her a chance at that, to find out “why I am like this” and have her attend regular school and have a real life at the same time. There is no way she is getting in that van.

As in her vision, Mrs. S tells Sarah that it’s time to listen to what her daughter wants. And Sarah, devastated to her core, hands her child over to Rachel.

In other clone news, Cosima is still trying to get to the bottom of what is happening at Revival. She interviews the little sick Afghan girl who seems to be important to their new initiative, but is interrupted by a message that P.T. Westmoreland wants to meet her. He turns out to be a real guy, dapper and certainly not looking like he’s 170. But there is a picture of him on the wall hanging out with Arthur Conan Doyle, so who knows.

He tries to convince Cos to join him in his work—after she finds a cure, to turn her attention to Revival’s work of extending human life. She is clearly intrigued, but wary, as this guy also seems to have a penchant for collecting rare specimens, and she could fall into that category. (Also let’s not forget there’s a crazy genetic-experiment beast tearing up the woods outside!)

Donnie takes Helena to the hospital where they treat her punctured belly. Her babies are OK, though the stick seems to have injured one of them in the sternum. Or at least that’s what it looked like on her first ultrasound­—now the injury seems to be miraculously gone. Helena immediately understands what this means: Like Kira, her babies have unexplained abilities and can heal themselves.

Her paranoia at a high pitch—primarily because people keep saying “neonatal” and she assumes they’re talking about Neos—Helena assumes the worst. These doctors are going to try to steal her babies’ DNA like they tried to do with Kira. So she stabs an obstetrician through both cheeks and her tongue with an amniocentesis needle and takes off in her hospital gown, leaving Donnie to pick up the pieces.

And finally, Delphine comes to visit Mrs. S in the middle of the night. She’s got something important to tell her, but she doesn’t want any of the clone sisters to know. It all goes back to Westmoreland and Revival, but what is really going on there is this season’s big mystery. 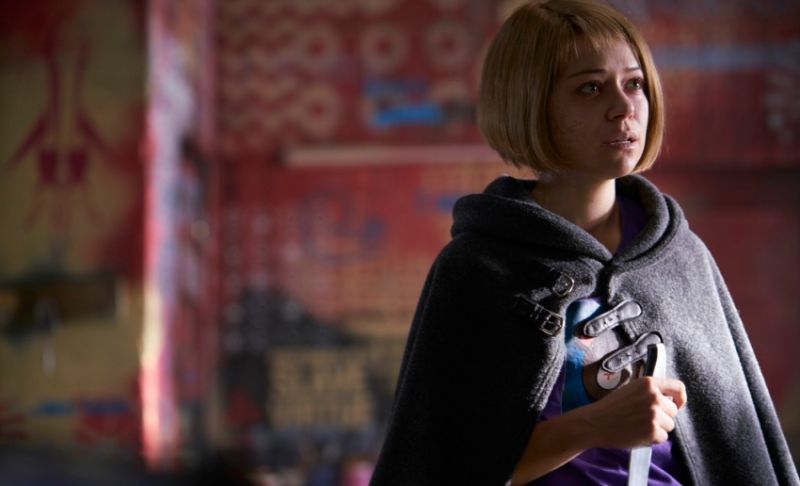