Maybe my favorite episode of Buffy the Vampire Slayer is the Season 3 episode “The Zeppo,” which centers on Xander Harris, the most ordinary of the show’s central characters. The episode title is an insult lobbed at Xander by his ex-girlfriend, calling him a useless bit player in his own life. On a team of super-powered evil-fighters, Xander is mostly stuck in the role of comic relief, often getting knocked out in the first few minutes of an epic battle.

Rattled, Xander goes off in search of his true identity, and after some missteps and misadventures, ends up playing chicken with a bomb and a bunch of murderous zombies (man, do I ever miss that show)—and he doesn’t flinch. His heroism, unseen by his friends, cements his place as a key member of Buffy’s team and a pivotal character on Buffy, no matter how mundane his skill set.

Well, ladies and gents, welcome to Orphan Black’s “The Zeppo.”

Alison Hendrix has always been something of an outlier in the Clone Club. Cosima’s the science, Sarah’s the street smarts, Helena’s the terrifying muscle, and Alison’s the…scrapbooking? Baked goods? Carpool-arranging? Sometimes when they’re planning a caper or an attack, you can see Sarah looking at Alison like she’s just barely holding back the words “Please sod off back to your McMansion and leave the actual work to the adults. We’ll call you if we need anything decoupaged.”

And the show as a whole often treats her the same way. The scenes set in the Hendrixes’ tony Toronto suburb of Bailey Downs (fun fact: Orphan Black co-creator John Fawcett originally created the fictional town for his 2000 werewolf movie Ginger Snaps; he made the suburb’s name out of the last names of the two main characters from cult favorite The Craft) are most often comic interludes in the main action of an episode. Ali’s story tends to run parallel to the clones-and-spies plot line; when the two do intersect, it’s usually because the mess of her life has created complications for the rest of them, forcing Sarah & co. to clean up her problems.

At first, that’s how this episode seems to be going, before Alison really finds her footing, stepping up and showing us, and her sisters, just what she is made of. Comic relief she may be, but she’s got a spine of iron and an unblinking gaze that can make even the high-and-mighty Rachel Duncan falter.

Convinced that the Hendrixes know where Helena and her magic fetuses are hiding out, Neolutionist cop Det. Enger decides to lean on them, hard. With Art in tow, she serves a search warrant for their house to find evidence related to the Portuguese drug dealer massacre back in season 3, hoping they’ll just give Helena up so she’ll leave them alone. And while there is nothing tying them to those murders, there are two bodies buried in the garage, bodies that it would be especially bad if Neolution discovered.

But Ali isn’t even there for any of this. At the episode’s start, the Neolution factotum Mr. Frontenac makes his own attempt to get Helena’s location from the Hendrixes, trying to break down Alison’s will by calling her out for being the useless Zeppo character in her sisterhood. Cut to the core by this—and by MK’s memorial service via Skype—she feels her sense of self slipping, and goes off to reassert her identity. But at first this involves falling back on old negative patterns: relapsing after months of sobriety, going back to meddling in the affairs of her community, neglecting and underestimating her husband, and so on.

Cleverly, the episode alternates these scenes with scenes from the night that Alison first realized she was a clone, presumably the last time she had a crisis of identity this severe. We learn, hilariously, that Alison was high on mushrooms when she was first introduced to Cosima, a very bad combo that led to Ali sitting in a room tripping out on the question of whether she is really a person at all.

(As an aside, it is very rare to see realistic representations of hallucinogenic states on TV or film, but this one truly nails it. When Alison is talking to Cosima, the perspective keeps dipping in and out of Ali’s perspective, so you can see how her initial impression of Cos was exaggerated by the drug, but without any stupid visual effects or pink elephants or what have you. Tatiana Maslay is, as always, superb here, playing a heightened version of Cosima that is just on the edge of parody without leaving reality too much.)

Ali has taken the drugs with her erstwhile neighbor and best friend Aynsley, who she later allowed to die as she stood by and did nothing. A juxtaposition that drives home just how alienated she has become from her old life as she rides in to the church’s annual Fall Fun Fair to try to reclaim her identity as a pillar of the community. This attempt is derailed over and over. By the new head of the fair, Nona, who snarks at her that her meddling is expected and rejected. By Reverend Mike, who casually mentions that god is watching right before she tries to poison Nona with drugged ice tea. By Aynsley’s husband and kids, who arrive to remind her of how much damage she has done. By her old drug dealer Ramon, who gives her booze and weed and more painful memories. And finally by Donnie, who shows up to tell her about the disaster unfolding in their garage, and then manages to drink the ice tea and expose himself to the entire town.

And it is at this moment that Alison discovers herself. Her sisters haven’t ruined her cozy suburban life—they’ve saved her from it. She publicly tells off her neighbors for their hypocrisy, and declares her allegiance to her sestra-hood, telling Sarah and Felix not to bother trying to clean up her mess this time. She’s going to do it herself.

And so she strides into Rachel Duncan’s office and dumps Aldous Leekie’s severed head on her desk. You think you can pressure us to give up Helena with this bullshit? Go ahead, arrest us all. You’re chairperson of a huge company; do you really want all of this being aired in the courts? Do you really want Neoloution to be exposed like this? I’m calling your bluff. Leave Helena alone.

Realizing she’s been outmaneuvered by a housewife, Rachel looks at Alison and says, “I should like to put my hands around your neck and squeeze.” And Ali just meets her gaze and says, “Then we’re not so different, you and I.”

It. Is. Awesome. I literally stood up and cheered.

Then Alison goes home to her husband and tells him she needs to take some time to figure stuff out, marking a more mature turn from her than we’ve seen so far. And they play us out with a lovely rendition of “Ain’t No Mountain High Enough,” the duet they never got to sing at the Fun Fair.

In other news, Rachel is doing something weird with Kira involving mice, as Kira continues to pull away from Sarah and Mrs. S and to hide what Rachel is up to from them. And it appears that Helena’s hiding place, which Donnie—with the help of his truly impressive wife—has successfully kept secret, is at a convent. 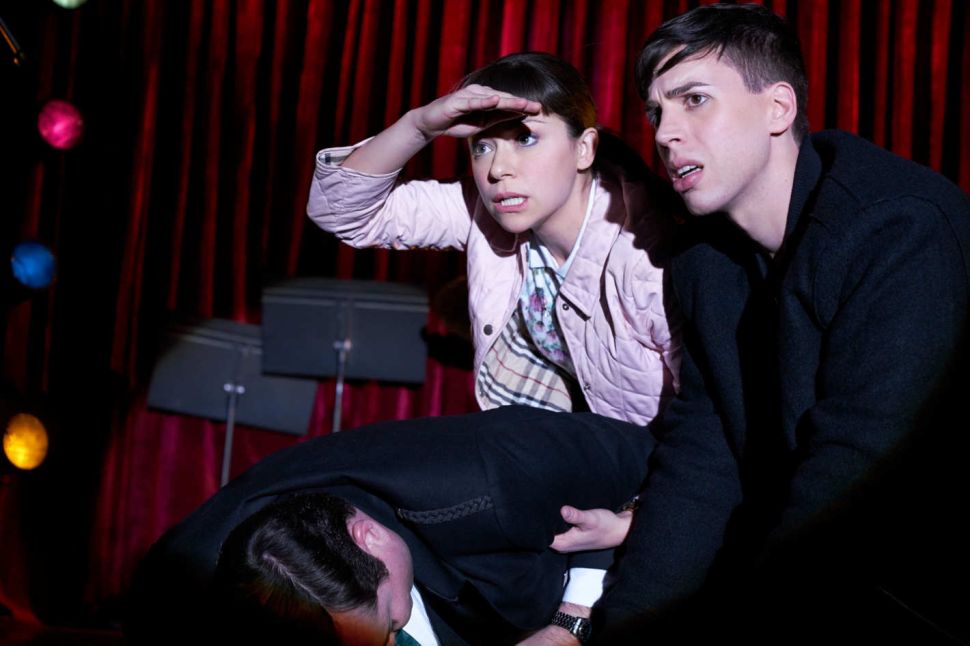