One of the things that makes Orphan Black such a complex and compelling show is the shifting and multiple antagonists. At first, the clones were controlled by the Dyad Institute. Then we learned about Topside, which seemed to control Dyad but only sort of. Later we met Neolution, originally a core philosophy shared by some of these enemies, but also the name of a shadowy group possibly also running things.

And so on. It added immeasurably to the realism of the show, and to the uncertainty and paranoia that our heroes labor under. They never know who, exactly, they were fighting, or what their enemy’s agenda was, because it was overlapping and ever-changing.

Well, all of that is done now, a new character named Mr. Frontenac explains to Felix. All of the “factions” have been consolidated under one Rachel Duncan. Her scheming at the end of season 4 has paid off: She is now effectively the head Neo bitch in charge. Rachel’s motivations are still not really clear, and the man she reports to, the putatively 170-year-old P.T. Westmoreland, may have his own plan (or may not even exist at all). But those days of multiple layered antagonists are gone. From now on, the enemy is Neolution, with Rachel at its head.

On the other hand, as much as the factions have consolidated, our dear sestras are as far apart as they have been for a while. And while Sarah clearly wants nothing to do with Neolution, Cosima is starting to believe that Neo science may be real, and may hold the key to her and her sisters’ freedom.

Let’s find each of them where we left them a year ago. Cosima, having come to the Island of Weird Science to work on the cure with Susan Duncan, witnessed Rachel stab her own mother and steal their cure. Cos flees with little sister Charlotte, but they lose their way and are rescued by a group of island-dwellers, including long-thought-dead Delphine. Sarah, arriving on the island to help Cos, runs into Rachel, who stabs her in the leg.

Mrs. S, along with little Kira, has been kidnapped by Ferdinand, who has defected to Neolution to join his lover Rachel’s takeover. Alison and poor put-upon Donnie have joined Helena roughing it in some Canadian national park to hide from the Neolutionists, who have taken over most of the police force. Oh yeah, and Helena is like 9 months preggo with twins.

Ok, all caught up now? Good. So: Cosima wakes up in a yurt in the secret village on the island (more like a big campsite), which turns out to be the true headquarters of Neolution. The village’s name, Revival, manages to neatly encapsulate both the place’s goals—it’s basically a huge longitudinal study on every possible method for extending human life—and the creepy religious fervor with which its residents treat their community and its supposed 170-year-old leader, who sits up in a house on a hill and only speaks to them through emissaries.

Cos is the kind of honored guest who is really a prisoner, watched over by her tour guide, an overeager kid named Mud for some reason (presumably so she could make the non-joke “my name is Mud”). Delphine is there, but not able to help very much as they’re watching her too. But she’s actually excited about the science they’re doing at Revival, which is presumably why she’s elected to stay with these nutcases at all. And her enthusiasm is contagious: Cosima starts thinking she may need to stay there too, even though Delphine is off on a secret mission to Sardinia.

Meanwhile, wounded, desperate Sarah has made it her mission to find her sister and GTFO. She manages to get a call out to Felix before her phone battery dies telling him that Siobhan and Kira are kidnapped and getting Ira to tell her the location of her escape boat. Then she bandages up her wound with a tampon, nearly passes out a few times (the episode has a neat little motif in which every time she fades out she sees Kira shaking her awake as if she wants to play), and limps off to find Revival.

She’s being hunted by both the Neolutionists and some weird Doctor Moreau beast-creature that roams the woods, but she manages to avoid them all. Long enough at least to make it to Revival in time to see Rachel descend from the mountaintop and make a terrifying speech about how she has “pierced the veil” to talk to Westmoreland, they’re going ahead with accelerated plans to find the secrets of longevity, and everyone there in the village will be the first to “drink from the fountain.” Like the fountain of youth? Aren’t they scientists?

Delphine has stolen a bit of the cure, and Cosima sneaks past her sleeping guard to go find it at the medical clinic. There she also finds Sarah, having come to rescue her and bleed everywhere. But Cos has decided to stay and find a lasting cure for her sisters through the science they’re doing on the island. Sarah hates to leave her behind, but runs off to find the boat, where a Neo is waiting to tranq her. And the last thing she sees is Rachel gloating over her.

Only minutes before, though, Rachel was helping Cosima inject herself with the cure (the one she stole in the first place!) and explaining that they have to work together now, as they are all part of Westmoreland’s plan. This show and its creepy old dudes with creepy plans.

Back in civilization, Art Bell has been saddled with a new partner who is clearly a Neolutionist trying to use him to find Helena. Knowing the play, Art calls Alison in the woods to tell her to sit tight, which of course she does not do, immediately swinging into useless action to try to fix everything. She doesn’t get very far, as some Neos show up and throw a bag over her head while both Helena and Donnie hang back. Art’s new evil partner puts a gun to his head to try to get Ali to tell her where Helena is, but Ali legitimately doesn’t know, because who knows what Helena will do in any situation ever?

What Helena does in fact do is tackle another of the Neo paramilitary dudes as he tries to capture Donnie, and in doing so gets her very pregnant abdomen pierced by a tree branch. “Stick in belly,” she grits in classic Helena fashion, and Donnie ill-advisedly rushes her off to get her to the hospital.

And finally, in an attempt to track down Ferdinand, the Nerd Squad (Scott and Hell Wizard) attempt to get in touch with “the masked one,” crazy hacker clone MK. Who may indeed be able to help them find Mrs. S and Kira, but let us not forget that she is terrifying.

And that’s it, mostly just some mopping up of loose ends from last season and a setup for the new one. One great thing about Orphan Black is that you can always find the mysteries of a new season embedded right there at the beginning. Like, what is that creature haunting the woods outside Revival? Why are the Neolutionists stockpiling cancer kids from Afghanistan? What, really, is this fountain everyone is talking about? And is there actually a 170-year-old man on top of that hill, or is he as much of a myth as everything else there? 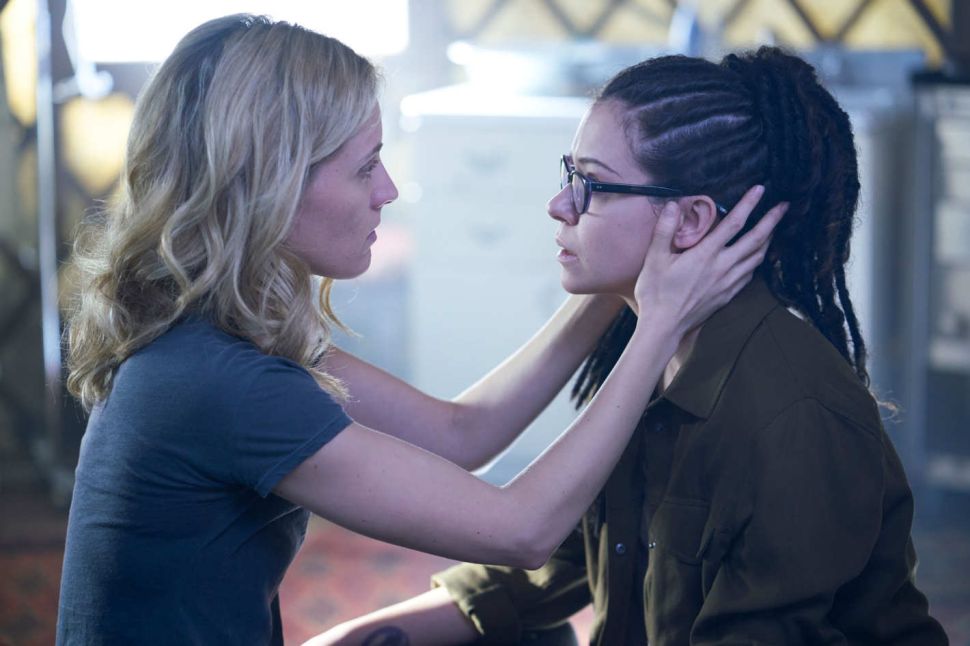