Welcome to our new weekly comics column, Near Mint, where media guru Johnnie Martin discusses all the KaPOW that’s fit to print. This week: The pulpy warmth of Spectacular Spider-Man #1.

With a new Marvel Studios approved Spider-Man movie, Spider-Man: Homecoming, on the way Spider-Man frenzy is at its highest possible peak. As such, the bigwigs at Marvel have also deemed it time for a fourth on-going Spider-Man title, Spectacular Spider-Man, to hit shelves- and they’ve brought in some real creative talent to make it happen.

Like many first issues, Spectacular Spider-Man (which went on sale on June 21st, 2017 opens with an origin story. That this origin is Spider-Man’s, a tale more familiar to some Americans than the crucifixion, is immediately infuriating. Why do this to us Marvel? Why?! But turn the page and things get meta, with Johnny Storm trashing Peter for telling us an origin story we all already know: Spidey failed to stop a robber who eventually killed his uncle yada yada yada. Writer Chip Zdarsky is aware of the common traps that befall too many comics and he wants us to know it by page two.

Zdarsky’s is best known for drawing the bawdy sci-fi romp Sex Criminals and being in a committed Facebook relationship with his local Applebee’s. Offbeat and experimental comedy is his forte, and I was curious to see how that would translate to the most mainstream of mainstream comics, a Spider-Man title. The answer is that Zdarsky is surprisingly sincere here while still retaining a bit of his edge.

Spectacular get’s the best laughs during Spidey’s interactions with new romantic interest Rebecca London, a standup comedian that Spidey rescues during a robbery. Rebecca doesn’t play the damsel in distress long and asks Spider-Man out just moments after her rescue. She’s an honest and forthcoming character with an interesting career—a welcome break from the bevy of secretaries and models that Peter has historically dated. She does a good job of letting Spidey be cute and awkward, and it’ll be interesting to see what a funny-man like Zdarsky does with her profession in standup. However, it was frustrating to see Marvel create another Black character with unrealistic platinum hair when so many Black figures in nerddom have hair that looks anything but natural. It was cool when Storm did it in the 70s but from Aqualad to Nintendo’s Twinelle I’m getting tired of the copycats.

Spectacular finishes strong with a pulpy cliff-hanger that’ll have most readers planning to pick up issue #2. The twist (without giving too much away) is female driven, and felt like a breath of fresh air after the recent announcement that upcoming Wonder Woman stories would focus on a newly introduced long-lost brother.

Although Zdarsky is an illustrator himself, this book’s pencil work is handled by superhero veteran Adam Kubert, who pulls the title into a visual mode that Spidey fans of the last 20 years will be very familiar with. While a suitable choice for this book, I couldn’t help but wish it was Zdarsky himself handling the art. After all, Spider-Man’s earliest success was due in part to Steve Ditko’s lanky whiplash draftsmanship, atypical of the other cape and tights books of the time. Like Ditko, Zdarsky’s left field pencils seem fairly outside this genre, but still a good fit for a more jocular character like Spidey. It would’ve been a pleasure to see Zdarsky’s art here.

Upcoming web slinger flick Spider-Man: Homecoming seems interested in Spider-Man’s warmer roots and I was hoping that this book might recall some of that early quirk, especially since I haven’t seen a web-slinger book get truly weird since Brendan McCarthy’s 2010 crossover with Dr. Strange, Spider-Man: Fever. The inking on Spectacular feels scratchy at times and some of Kubert’s smaller panels seem a bit under-developed. Kubert is usually at his best when his figures are angry, fighting, or angrily fighting. He didn’t have the opportunity to flex those muscles in the first issue of an upbeat Spider-Man title.

Other shortcomings feel less like the creative team’s responsibility and more the fault of Marvel’s current canon. It’s off-putting to see the Human Torch in a costume that’s not blue with a four on it, and Spidey’s currently sporting a gray web belt that’s a real eye sore. A back-up story involving the Black Widow feels tacked on by corporate to justify the $4.99 cover price but does feature a solid, sight gag involving a little boy being rescued from a robbery, who spends the entire encounter nonplussed and playing games on his phone.

What IS spectacular here is Spider-Man himself. With 50 plus years of comics behind the web-slinger, it’s comforting how easily Zdarsky (and so many other writers over the years) can slip into Peter’s light and witty voice, almost as if it’s sprinkled into the ink. I’m interested to see where Zdarsky and Kubert take that voice in the coming months. 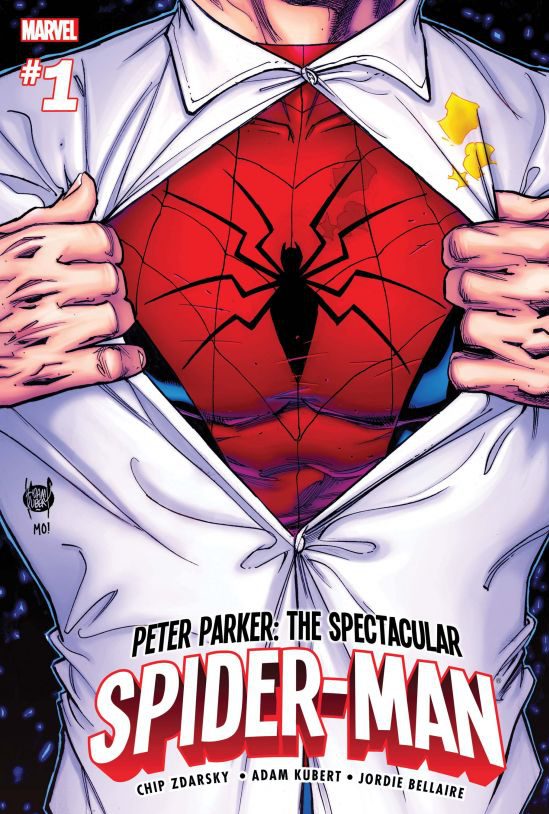