Have you ever felt lonely in the middle of a crowd?  As our world gets more populated and the land recedes into the ocean, we all find ourselves jostling for space and recognition.  It’s a baffling condition, to be surrounded by people while feeling utterly unable to make contact with them.  More than baffling, even, it harms us – psychologically, human beings survive on an “attach or die” model, so to be lost and alone in a sea of people does more than foster loneliness.  Being alone in a crowd can easily be understood to be a sign of being somehow wrong or bad, a thought process that engenders shame.  And from shame comes desperation, anger, and fear, all emotions that can lead to real harm.

It is this spiral of alienation that pushes the narrative in Ken Loach’s new film I, Daniel Blake.  The plot is a simple one confounded by the twin oppressors of bureaucracy and neoliberalism, wherein Daniel Blake (Dave Johns) tries over and over to claim benefits to which he is entitled, only to be rebuffed at every turn.  It’s a process that looks very different depending on which side of it you’re on – to the bureaucrats, Daniel just needs to start crossing his Ts and dotting his Is and he’ll be fine.  To Daniel, it’s a journey through a system that punishes him for all his good qualities and demands he finds someone else to be in order to survive.

Unfortunately, this level of disconnect in the quest for benefits and social safety nets is not particularly rare.  The massive systems designed to support millions of people are inflexible, and the people working them often have caseloads that are literally impossible to serve adequately.  In my own work as a jail-based addictions counselor, I often tried to help inmates reintegrate into a world that made no room for them.  If you’ve had the luxury of being raised in such a way that you can navigate a tax form and speak the way landlords like to be spoken to, this is a difficulty you could easily never even know existed.  But for those who weren’t prepared for the world as it is now, getting back on their feet can be a near-impossible task.

As viewers, we see this all over I, Daniel Blake.  Daniel’s neighbor, China (Kema Sikazwe) has a long-running subplot through the film to sell factory-extra shoes from China at cut-rate prices on the streets of Newcastle.  It’s a big, effortful hustle to make probably a couple thousand dollars.  It’s the sort of thing that probably won’t lift him out of his underemployment at the local loading dock, won’t lift him out of a life that stresses him out and insults him without adequately rewarding him, and could easily get him arrested or audited.  But what’s he supposed to do, starve?

Similarly, Daniel’s closest friend in the film, Katie (Hayley Squires), is scamming herself in order to feed her kids.  She can’t find any work and has been denied benefits, so she skips meals in order to provide for her daughter and son.  This is a scam with obvious and dangerous downsides, but again, there aren’t many better options for her.  Eventually she ends up resorting to more and more ego-and-society-dystonic solutions in order to provide for her family and herself, setting up a situation that will be near impossible to escape should she ever need or desire to do so.

The point being, the characters in I, Daniel Blake aren’t without agency, but they are trying to scrape by in a system that punishes them for using it. And a set up like that can lead to real emotional distress, the kind that takes a severe toll on a person.  These characters have been alienated first from society, and then again from each other as a result of the “anti-social” survival strategies they’ve been forced to take up.  They are left with agency but without a voice.  And without voice and companionship, they lose the ability to adequately process the emotional experience they are going through.

Maybe that sounds like a small thing, but it isn’t.  In the discussion of trauma in the psychological world, the understanding of what can be traumatic has broadened dramatically in recent years.  People are starting to realize that any experience that feels dangerous can cause trauma if it is not properly processed.  In the world of wild mammals, trauma is processed alone – a deer narrowly escapes death, goes and hides behind some bushes, and literally shakes its nervous system clean.  But we modern Humans don’t process that way, because we are domesticated mammals.

The way modern Humans process trauma is a response to our environment.  Namely, we surround ourselves with ourselves and feel most safe in company.  As such, we process trauma through simple communal activities like safe touch, soft eye contact, and talking about safety.  In the world of I, Daniel Blake, these options are quickly removed.  Alienation in the face of the system is the most intelligent response Daniel, Katie, and China can make.  Sadly, it pushes them to desperation and harms them in the process, stripping them of dignity and flooding their lives with stress.

Against this destiny of erasure, Daniel makes a crucial choice to speak up.  He has tried to do so the entire film, but his voice has proven powerless; he doesn’t speak the right (digital?) language to communicate with the modern systems he has come up against.  Over and over they assure him he is voiceless, so instead of making a sound he resorts to painting one.  In the climax of the film, Daniel spray paints a declaration on the wall of the benefits office that has so consistently rebuffed him.  While the message is ostensibly a demand for his benefits, it also sits comfortably in the realm of the emotional; Daniel is declaring his human need, and right, to be seen and heard within his society.

The scariest part is, our society seems to be headed more and more towards these alienating structures.  Automated and near-automated systems are designed for the kind of efficiency required by a world so full of people, but an unspoken cost of that efficiency is paving over the ability to communicate inefficiently.  As we continue down this road, we will all be put to the test of how to demand our place in a world that can’t hear our screams.  We, like Daniel, will all have to become artists of desperation, learning to talk in mediums not restricted by progress. 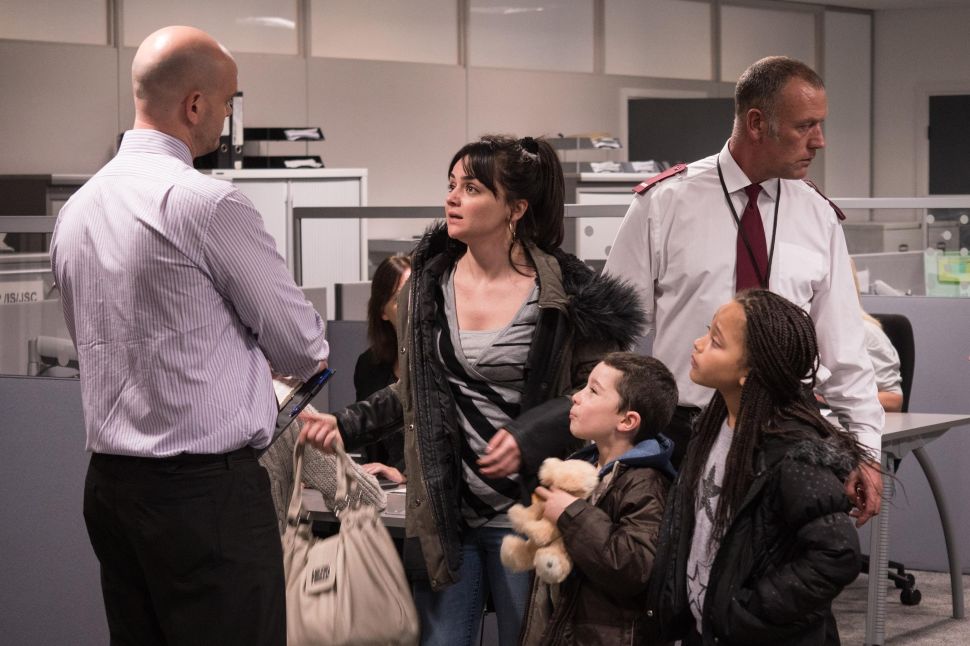