The UF grad had never watched the show; his sister Cher, a dating coach and former My Super Sweet 16 star, applied on his behalf and even took his head shots. Once he was in the running, he caught up on the previous season’s hijinks, including beauty blogger Nick Viall’s inability to articulate.

“Before they announce to the world who it’s going to be, they show you her and give you a chance to say no,” he admitted, detailing the experience in its entirety (one fun fact—the engaged couple must stay together two years in order to keep the Neil Lane engagement ring).

No one stood out to Hubsher as the man of Rachel Lindsay’s dreams, but he described his fellow contenders as “cool and chill, a bunch of good looking guys hanging out.” Of course, the man with “Whaboom” as a catchphrase and an occupation was memorable, although not for the right reasons. “He was super annoying, he wouldn’t stop talking…there are a lot of overly overtly confident guys,” Grant confessed.

Unlike other contestants, he’s not an aspiring drummer or self-proclaimed tickle monster, so the Emergency Medicine Physician was tasked with explaining to his bosses why he would be gone for two months. As he was unable to actually tell his colleagues he was pursuing love on reality television, he said he was traveling. When he returned early he simply told them Asia wasn’t what he expected.

“I feel like in the first minute of meeting somebody, it’s hard to sweep them off their feet,” he told us, as he and Rachel only spoke for about three minutes. He approached their moment together as a regular first date, but soon realized with 31 other men present, there needs to be something to set you apart, whether it’s putting on a ventriloquist act or packing enormous hands for tickling purposes.

On the first night, there are light snacks (remember villain Chad’s constant lunch meat consumption?), but it’s an open bar. “If you go to any wedding with an open bar, you’re going to have those guys that have one or two drinks, the guys who have six or seven and are dancing, and then there’s going to be that 21-year-old that has twelve drinks and passes out. There is peer pressure to drink, take shots, drink and have fun—I mean, it’s guys talking about who has a bigger dick and one upping each other all night.”

He met frontrunner Bryan early on, as both are from Florida, but didn’t know he would be a favorite until later. “I didn’t realize he made out with her initially—bold move on his part,—but he was pretty nonchalant about it, which is a gentlemanly thing to do…He had to claim his territory,” he said, describing Bryan’s kissing style as “aggressive.”

Like everyone watching at home, Grant believes it’s between Bryan, who received the first impression rose, and personal trainer Peter, who went on the first one-on-one date. “I think the whole show is going to be the fight between those two. And everyone else is standby,” he said describing Peter as having a “nice gentlemanly charm.”

Of course, it’s a disappointment to be eliminated, and not just because of the lack of Fit Tea and DIFF Eyewear opportunities. But Grant still believes Rachel can find love, despite the show’s track record. “I don’t think everybody there is looking for, or even wants, a relationship. If she picks correctly, there are maybe 25 percent of the guys who are like that. She could find somebody,” he reflected.

And like any good Bachelorette contender, he maintains he is still here for the right reasons. “I went in thinking it would be a good experience, open to finding a relationship—I still am open to that.” 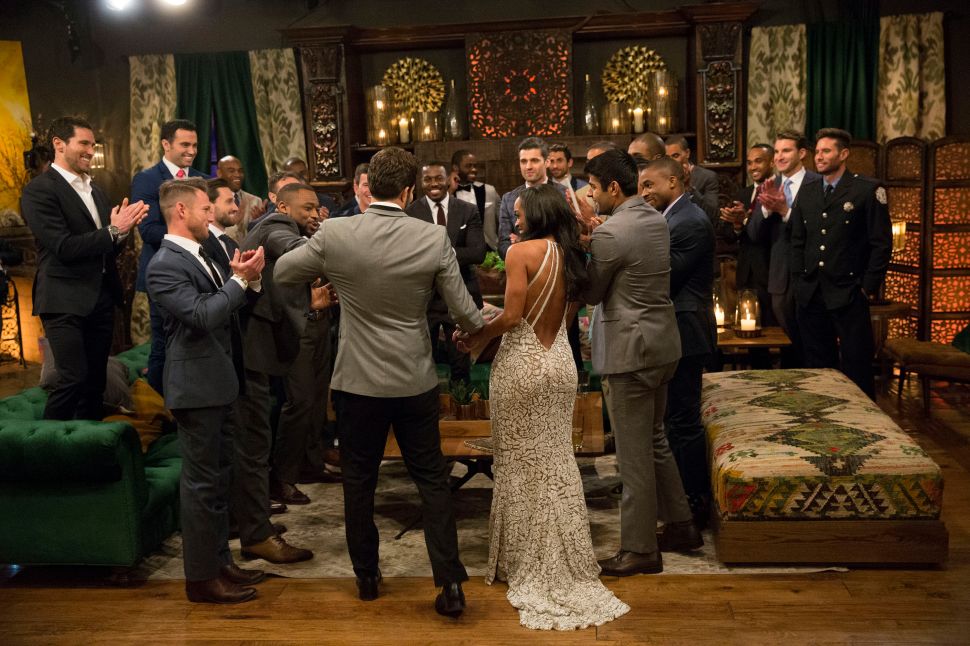