When Pitchfork rolled out their “O.K. Computer Week” in March, they didn’t just inexplicably share a string of features about Radiohead’s landmark record three months ahead of the album’s 20th anniversary—they noted under each headline that all stories were sponsored by the email marketing service Mailchimp.

Now, there’s nothing inherently wrong with Mailchimp, nor is there anything wrong with an outlet promoting its sponsors—should they be clearly identified, as was done on these pieces. But advertorial interests ought to align with the editorial, not contradict it. While the site’s own writers unpacked O.K. Computer‘s prescient themes of technology imposing itself on infrastructure, of technological ubiquity affecting everything from our elections, to our accelerating consumption habits, the context of this presentation completely undermined the work itself. To slap that particular sponsor on those stories, a sponsor that currently functions as one of the largest purveyors of such accelerating, marketed ubiquity was puzzling, contradictory, and off-brand.

The idea that technology and society was moving too fast for its own good was already apparent to Radiohead when they made O.K. Computer 20 years ago. To see a retrospective of this album sponsored by a company that helps to fuel the current desperate gallop towards endless consumption and technological dependence only strengthens the longevity of O.K. Computer‘s message.

“I was getting into the sense of information overload,” frontman Thom Yorke recently told Rolling Stone about writing O.K. Computer at 27. “Which is ironic, really, since it’s so much worse now.”

On June 23 the band honors the album’s 20th anniversary with OK COMPUTER OKNOTOK 1997-2017, a reissue featuring not only the original album, remastered, but a second disc of three unreleased tracks and b-sides.

In the midst of pro-Palestinian groups like the Boycott, Divestment and Sanctions (BDS) movement protesting the band’s decision to close out their tour in Tel Aviv, in the age of Brexit and Trump, Radiohead still refuse to take sides. They resist the simple, polarizing branding of identity, the expedited identification with this movement or that, and live ambivalently in the middle—for all its unsatisfying complexities, and perceived conflicts of purpose. And the sharpening of such wide-angled, non-partisan views on the state of the world all began with O.K. Computer.

“The paranoia I felt at the time was much more related to how people related to each other,” Yorke explained in the Rolling Stone interview. “But I was using the terminology of technology to express it. Everything I was writing was actually a way of trying to reconnect with other human beings when you’re always in transit. That’s what I had to write about because that’s what was going on, which in itself instilled a kind of loneliness and disconnection.”

Pitchfork’s Mailchimp sponsorship similarly echoes one of Radiohead’s greatest paradoxes— the band has successfully crafted and branded an aesthetic around anti-capitalist practices, from their music industry-upending In Rainbows roll-out, to their fan community and merchandising. Both Radiohead’s fan club and web store, for example, fall under the “W.A.S.T.E.” organization, an acronym borrowed from Thomas Pynchon’s The Crying of Lot 49 that stands for “We Await Silent Trystero’s Empire.” In the novel, Trystero is an underground, shadow network that consciously works to subvert mainstream culture.

Everything from W.A.S.T.E. merchandise adorned with band lyrics, to the reflective stickers given to photographers on tour that read “Generic Sticky Pass” reflects Radiohead’s conscious embrace of un-ordained, almost autocratic language. The band plays around with a fair bit of sloganeering, too, a stylistic approach that all began with their laundry list of thoughts befitting a modern human on O.K. Computer‘s “Fitter, Happier.”

Appearing halfway through the album, the mechanized voice in “Fitter, Happier” speaks pre-ordained slogans that start out nice but soon turn dour, until the voice describes its subject as “a pig in a cage on antibiotics.” This song was the beginning of the band making their art into a knife, documenting a fascination with artificial intelligence on O.K. Computer that would thematically link to their Kid A ruminations on the first cloned human, than explode among a landscape of jingoistic jargon and false flags on Hail to the Thief.

That “Fitter, Happier” appears halfway through seems like no accident—Radiohead were working toward it for the first half of the record. Opener “Airbag” tests our faith in technology to the extreme, echoing a car crash Yorke may have experienced years before to express that we’re simultaneously grateful for technology and terrified by our reliance on it. Immediately following that, the fan-favorite “Paranoid Android” then suggests that same terror soon affects our opinions of people we’re so reviled by that we don’t understand how they can possibly be human.

The late author Douglas Adams explains Marvin, the Paranoid Android in his classic, A Hitchhiker’s Guide to The Galaxy, as the proudest achievement of the Sirius Cybernetics Corporation, whose marketing department he describes as, “a bunch of mindless jerks who’ll be the first against the wall when the revolution comes.” By evoking the same wall, “with your opinion, which is of no consequence at all,” Yorke makes known his love of this salient satirical detail from Hitchhiker’s Guide—“content” is of no consequence, nor are legacy stories, really.

The “rain down on me” bridge, echoing Blade Runner character Roy Batty’s “Tears in the Rain” death soliloquy at the end of the classic sci-fi film, further brings the struggle between humanity and artificiality home. Yorke then goes even deeper with this theme on the next track, “Subterranean Homesick Alien.”

The fact that “Exit Music (For a Film)” was actually written for Baz Luhrmann’s Romeo + Juliet only further contributed to Radiohead’s paradoxical status of simultaneously operating from within a corporate narrative, while challenging that narrative in order to push it forward.

Had it not been for that song, this writer would never have discovered Radiohead at age nine, would have never plundered his older brother’s tape collection to find a copy of The Bends, and would likely be a lot less cynical today. As one of the most straightforward tunes on the album, it was a perfect entry point for many of us into the back catalog of a band that was on the cusp of transforming themselves into something radically different, and we’d be with them every step of the way.

The reissue’s b-side, “Lift,” which Radiohead played often during their dates opening for Alanis Morissette on her 1996 Jagged Little Pill tour, hints at the more commercially-friendly sound they might have gone in. But as it stands, “Exit Music” is the one of the most instantly accessible moments on O.K. Computer.

“Exit Music” is followed by the great “Let Down,” in which the disappointing transience of travel instills an unfeeling numbness in our singer. Sentimentality is being emotional for the sake of it,” Yorke told Humo magazine about the song in July of 1997. “We’re bombarded with sentiment, people emoting. That’s the let down. Feeling every emotion is fake. Or rather every emotion is on the same plane whether it’s a car advert or a pop song.”

That let down leads to the realization that emotions are fake because people are manipulating them. And the next tune, “Karma Police” became a classic because, like “Paranoid Android” and most of Radiohead’s best songs, it rings as a powerful “fuck you” to those who attempt to exercise control over things that are part of the natural order (like karma or emotion). It was also a band joke, a phrase that would be ascribed to anyone when they were acting like an asshole.

These tunes precede “Fitter, Happier,” adding up to an explanation of how we got to the point where a computer is dictating our reality for us. As a comment on what comes next, Radiohead’s most political tune, “Electioneering” attempts to cast cynicism on Tony Blair’s election as prime minister, running on the New Labor party platform. Recycling George H.W. Bush’s term for Reagan-era policies, “voodoo economics,”and adding images of cattle prods and The International Monetary Fund, Radiohead paint a picture of a man with intentions different from those he’s stated, a man who’s not all he claims.

“Climbing Up The Walls” marked multi-instrumentalist Jonny Greenwood’s most impressive arrangement at that point, composed of 16 different violins playing quarter tones apart from each other for an effect that makes it one of the band’s creepiest songs. Our singer reminds their addressee that they will remain present, to the point of discomfort, injecting themselves into the environment whether they’re wanted or not. Among the many interpretations of this tune, it fits in the context of the album as a comment on the creeping need to be noticed, something which has become a more prevalent problem in our age of over-saturation of news and instant gratification, courtesy of social media.

As with “Let Down,” “No Surprises” echoes the sentiments of someone who has been rendered unfeeling in the face of boredom. They’ve got a stock pretty house, a stock pretty garden, a dumb job, a broken heart, and nothing to show for it. But while “Let Down” showed this feeling creeping in, “No Suprises” is the song about how Yorke feels now that it’s arrived. The networking yuppies in “Paranoid Android” seem to have won.

A sister song to “Airbag,” fan-favorite “Lucky” also describes a transportive near-death experience, but Yorke’s a lot more cynical as he drawls, “I’m your superhero/we are standing on the edge.” Prescient though that unnamed “edge” may be in referencing what would be the explosion of Internet and artificial intelligence over the next few years as we inched toward the new millennium, it’s the next verse that became the most pointedly prophetic — “The head of state has called for me by name/but I don’t have time for him.” In 2003, Tony Blair invited Yorke to talk about climate change with him, a topic Yorke has been passionately involved in raising awareness about. Yorke declined.

As a closer, “The Tourist” perfectly captures O.K. Computer‘s comments on the doom that comes with an accelerating technological infrastructure. “Hey man, slow down,” sings Yorke in a tune reportedly written by Jonny Greenwood after he watched a group of tourists run through France. If only we had listened. 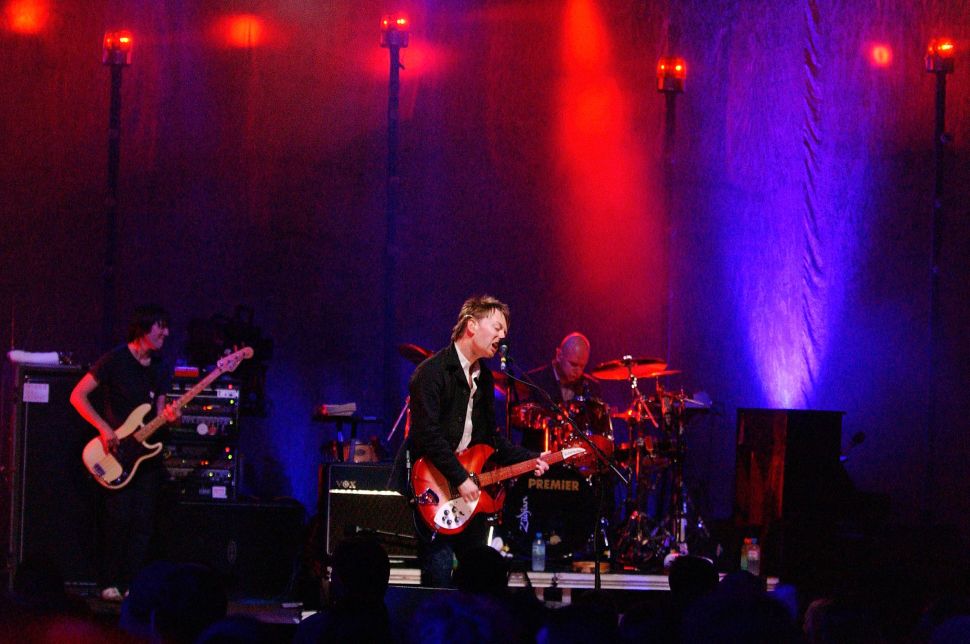