The “Iftar in the City” dinner—breaking the fast Muslims observe during the daytime through the holy month—took place in Columbus Park near Brooklyn Borough Hall. The New York City Commission on Human Rights, the Mayor’s Office of Immigrant Affairs, the Mayor’s Community Affairs Unit and Mayor’s Center for Faith and Community Partnership host the event.

This year’s theme was “resistance,” according to Rama Ibrahim Issa, executive director of the Arab American Association of New York, who emceed the event.

“We’re here to resist—to resist negativity and come together in unity and love, to break bread together in this amazing tradition that is iftar,” Issa said, to roaring applause from the hundreds-strong crowd.

Bitta Mostofi, assistant commissioner for the Mayor’s Office of Immigrant Affairs, told the Observer that her agency has held more than 300 Know Your Rights forums to inform those lacking proper paperwork of their legal protections. It also coordinates with other members of Cities for Action, a coalition of nearly 100 mayors and municipalities that favor a liberalized immigration policy and oppose deportation.

She said MOIA and the Human Rights Commission are working on getting people to report the growing number of hate crimes so they can respond effectively and investigate, referring to NYPD reports of an increase in hate crimes since the election.

Mostofi said resistance, in the city’s view, could be everything from defending someone who is being “talked down to or discriminated against” in the subway or protesting at John F. Kennedy Airport after the first Muslim travel ban was initiated—or the Yemeni bodega owner strike in front of Brooklyn Borough Hall in February, objecting to the Trump administration’s decision to target their home country.

The day after the first Muslim travel ban went into effect, Immigrant Affairs Commissioner Nisha Agarwal and other MOIA staff went to JFK to provide legal counsel and coordinate with relatives of travelers held in detention because the White House fiat went into effect while they were airborne.

“There are many shapes and forms and sizes of resistance, but what the mayor has declared from the onset with this onslaught of threats and fear towards our community is that we would resist and continue to resist and stand side by side with all New Yorkers,” Mostofi said. “Any attempts to threaten us, to take away who we truly are as New Yorkers and the inclusivity that we celebrate and the reality that we do all of these things and we do them—one, because they’re the right thing to do and that’s who we are and two, because they work.”

Human Rights Commissioner Carmelyn Malalis told the Observer that they held roundtable discussions with immigrant rights, racial justice, LGBTQ, workers rights and interfaith and faith-based groups, which led to “You Have Rights NYC,” an anti-xenophobia campaign.

She noted that last September, three Muslim New Yorkers were murdered in Queens within a five-week period, and that the city subsequently released the “I am Muslim. I am NYC.” social media campaign. She also said they partnered with NYU’s Islamic Center to put together a workshop training on understanding the diversity of Muslim communities and combating Islamophobia.

“I think that is probably unprecedented for government to do,” she said. “But we wanted to let our Muslim brothers and sisters in New York City know: we support you, we stand with you and the folks who dare to discriminate or harass them, we wanted to send the message to them, too, that we’re not gonna tolerate it and they could face fines—up to $250,000—if they’re gonna do that.”

Last year, the city started conducting outreach efforts in its Muslim communities. Malalis noted that they wanted to reach out to communities that have not had strong relationship with government or the commission in the past, particularly those that have had “challenging histories” with law enforcement and have felt “over-policed in their neighborhoods”—which she said included Muslim communities.

People, she said, connected over food and sitting around a table and talking about themselves, their families and their challenges.

“We thought, let us introduce people from New York City to iftar,” she said. “There were many people in New York City who had never heard of what an iftar is, much less Ramadan.”

The city sent out invitations to several faith-based groups, community groups, Muslim organizations and mosques. Although they were only expecting 200 people at the inaugural iftar, more than twice that many showed up. People of all faiths expressed interest in the city hosting the event again.

This time, roughly 600 people signed up, with people also on a waiting list, she said.

“I didn’t even know there was a commission for human rights back in the days because that’s how stale that institution was and I’m grateful for the leadership that Carmelyn has brought to this office, to our communities and making sure that all of us in New York City are being treated with dignity and respect,” Sarsour said.

Rev. Chloe Breyer, executive director of the Interfaith Center of New York, said her center has been around for about 20 years and never “could have envisioned a scene like this” right after the September 11, 2001 attacks “when we thought this could be a part of the landscape of our city.”

“We are in a different time now,” Breyer said. “We live in democracies. We embrace diversity and what is it that can be the spiritual center. Well I think it is moments like tonight where we take the particularity of one tradition and we open it to all and we translate the particularities of one tradition into the embrace and inclusivity that our public squares require.” 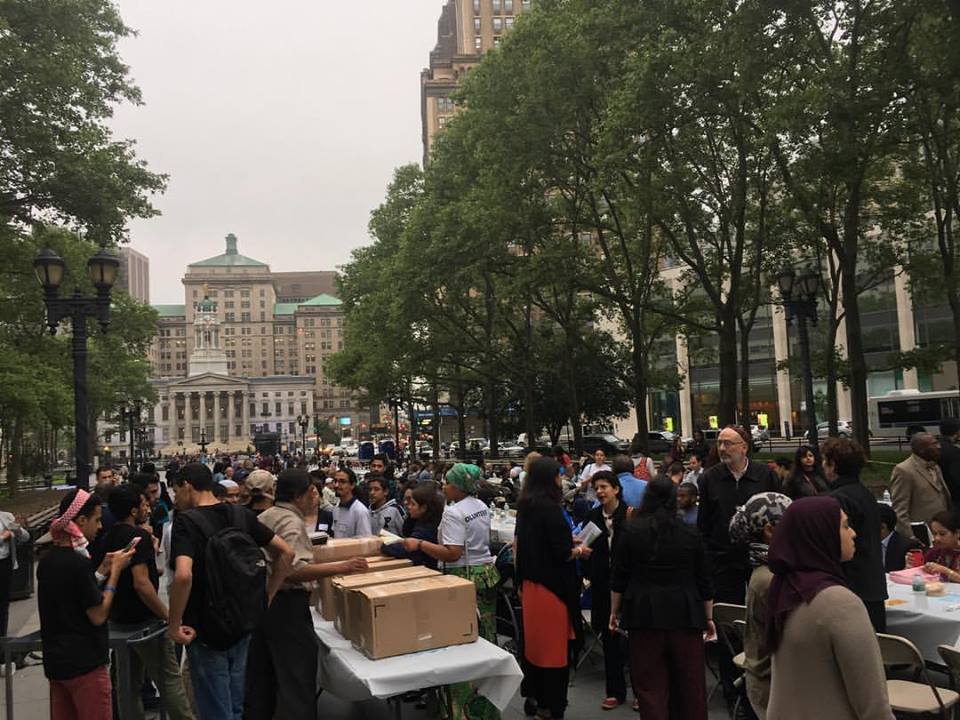