The 78-year-old artist Hermann Nitsch may have endured an onslaught of criticism in the lead up to his performance at the Museum of Old and New Art’s Dark Mofo Festival last past weekend, but the hype surrounding his planned slaughter of a bull paid off in the end—at least for Nitsch. On June 17, over 900 people showed up to watch a three-hour long, blood-soaked performance led by the founding member of the Viennese Actionist art movement, marking his largest audience for a show to date, reports the Art Newspaper.

Prior to the weekend’s show, Nitsch’s plans to sacrifice a bull and use the carcass in his performance sparked protest and an online petition which gathered over 22,000 signatures. And while about 50 protestors did show up the day of, according to writer Tim Stone’s account of the event for the Art Newspaper, they peacefully offered attendees alternative activities to the performance.

As the show’s date approached, enthusiasm from festival-goers grew, with approximately 2,650 people citing their interest show online. 150.Action, as the performance was titled, drew a final ticket count just shy of 1,000, making Nitsch’s audience officially bigger than ever. (The largest gathering for one of the artist’s legendary performances—which often feature nudity, crucifixions, blood, music and ritualistic symbolism—was in 1988 when 800 people attended a six-day-long show in Austria, according to the Art Newspaper.)

“Throughout the three-hour ‘action’, performers, some dressed in tunics, others naked, but all blindfolded, were strapped to crosses and forced to drink blood, and milk,” writes Stone in his account of the event. “In the second hour the bull carcass appeared, more mock-crucifixions took place, before the carcass was hoisted on a gallows-like structure and lead around the room….”

“Asking people to push themselves out of their comfort zone is core to our ethos,” Dark Mofo artistic director Leigh Carmichael told the Art Newspaper. 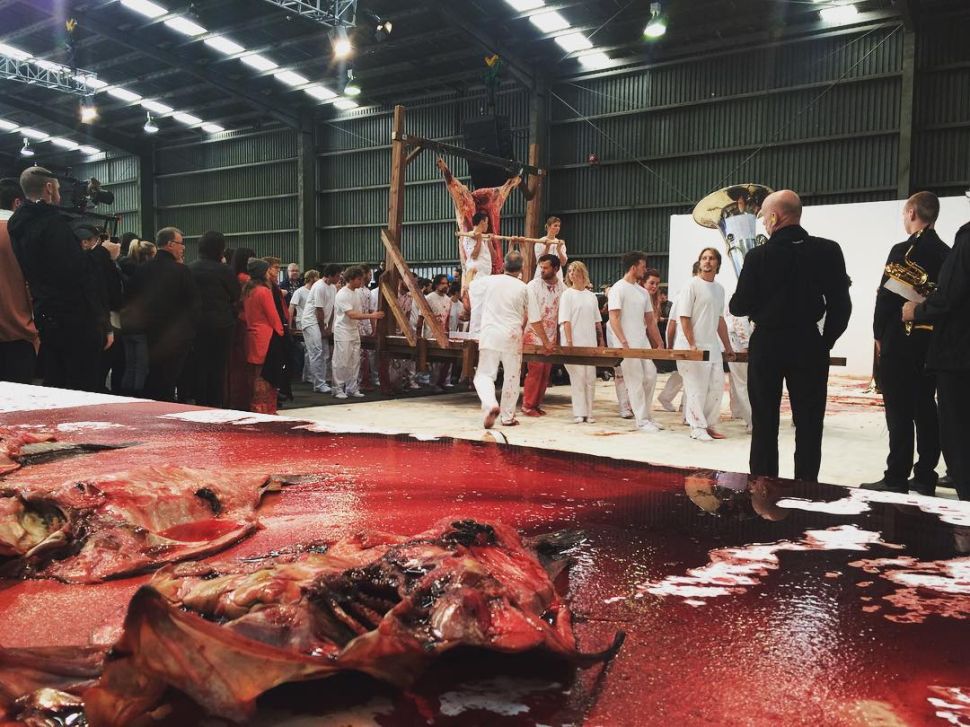