The Season 3 finale of Better Call Saul is right around the corner, and while Jimmy (Bob Odenkirk) hasn’t achieved full Saul Goodman status, he’s well on his way. But while the Breaking Bad prequel series has been great at documenting his gradual decline into the crime underbelly of Albuquerque — and Heisenberg’s eventual crystal meth empire, McGill is still skating the fine line between good and bad, legal and illegal, right and wrong.

And yet, I’d be remiss if I ended the Better Call Saul conversation on Jimmy, because the story Vince Gilligan and Peter Gould have presented to the masses is just so much more than that. Over the past three seasons, we’ve watched Mike (Jonathan Banks), Chuck (Michael McKean), Nacho (Michael Mando) and Kim (Rhea Seehorn) all struggle with their own versions of morality. It feels as if the finale is setting things up “break bad,” so to speak, for all involved.

It’s hard not to have empathy for every character here — yes, I even want to give Chuck a hug — but last Monday’s (June 12)  episode, titled “Fall,” really put Kim’s emotional and physical well-being into question.

But, pulling all-nighters and working one’s self ragged can only take a person so far, and as we watched her fall victim to a jarring car accident — on her way to close the Gatwood Oil deal — it’s hard not to wonder: Is this Kim Wexler’s Breaking Bad moment? Will the accident and its aftermath, be the pivotal moment that leads Kim down the road we all know Jimmy will eventually take? Or with this be the straw that breaks the proverbial camel’s back — leading Wexler to cut ties with McGill once and for all?

Ahead of Monday’s Season 3 finale, “Lantern,” I had a chance to once again speak with Rhea Seehorn about the journey Kim has taken throughout the series. A lot had changed from the last time we spoke, and as always, she gave me some wonderful insight on Kim’s internal struggles and how they’ve shaped her character’s trajectory throughout the past three seasons.

A lot has transpired since the beginning of the season. I have to ask, how’s Kim doing now?

I think she’s a little tired.

Yeah, it’s been a blissfully challenging season for me — to play someone that is this loathe to admit or show vulnerability and this loathe to ask for help. She’s very tightly wound. We don’t know exactly where she came from but when we meet up with her, when this series starts, it’s apparent that she is a workaholic and sort of, morally, has attached herself to this idea: If you just keep your head down and work hard enough and stay on the right side of the law, then you’re a good person.
That got kind of smashed to smithereens in Season 2 and now Season 3 is the consequences of that — of realizing good and bad are not the same as legal and illegal. Not everything is black and white. Everything happens in the margins. Where do you fit in if you’re trying to practice law in the middle of that? Chuck is a pillar of justice and yet he’s doing terrible, harmful, hurtful things. Jimmy’s a con man, but is often the most loyal person to her … and the most honest. So everything gets turned on its head and what was once her saving grace of her being such a workaholic, and refusing to ask for help, is now beginning to be her undoing.

Dare I ask, do you think Kim would be in this specific mess if it weren’t for her involvement with Jimmy?

I look at some of the con scenes that they had earlier and she’s reluctant to do it, but is apparently good at it. We don’t know everything about where she was before or what she came from so there are times when I feel like … what does somebody draw out of you? What do they uncover that was already there, versus what’s new? And I don’t really know the answers but I think that’s part of what makes these characters very human and complex. We don’t know the whole story and, sometimes, they don’t know the whole story about themselves.

But the story we do know makes it hard not to look at Jimmy as an enabler to Kim’s darker side.

Yes, there are predicaments and circumstances that being involved with Jimmy has put her in. No doubt. But there’s also this huge monster in the middle of the room: This Mesa Verde case. Yes, Kim chose to defend Jimmy — or at least not to aid Chuck by prosecuting him. But she could have then recused herself from the case. She could have still chosen to not represent Mesa Verde and just tell them that you need to seek other counsel and not have taken the paycheck.

But I believe Kim’s own ambitions, and her own cloying sense of “I deserve this,” which we saw the whole time she was at HHM … You know, with the whole “What do you mean I don’t move ahead if I don’t keep my head down and work my ass off?” We all know that’s not the way life works, but Kim wanted desperately to hang on to that and I think grappling with the idea that even her inner moral compass — that’s not affected by other people — is getting shaken.

It seems everyone’s inner moral compass is getting shaken in some way. Who do you root for when everyone is walking a line between what’s right and what’s wrong?

It’s hard and Chuck, the pillar of justice, is a terrible person and Jimmy’s a con man but sometimes the most honest one in the room. And Hamlin was her mentor but now seems like he treats her like a pawn.

There’s a lot going on and I don’t think you can always exactly pinpoint what was the seed of that. What’s the origin of that? Certainly, being around Jimmy is making her face some things. When would she have faced them, otherwise? I don’t know. Ten years from now? Or has she already? I’m not sure. I think it’s much more complex than she’s the victim of being with Jimmy. I think that is way too simple for what’s going on.

Kim’s pride and work ethic has informed every one of her decisions up to this point. In Episode 8, we watched her write that check to Howard Hamlin — attempting to take the power back, so to speak. And then, she almost drove off the side of the road … How do you think this accident will affect Kim’s career and professional life, moving forward?

It’s interesting. I’ve always thought that — and this isn’t a profound original thought, as there are many psychiatrists who talk about this — when the world seems like it’s out of control to human beings, they tend to exert control over something they can control. You know, this I have no control over this area so I’m going to make sure my lawn is manicured to within an inch of it’s life type of thing.

So, that’s how I felt in that moment with Howard. Things are spinning out of control, but when she decides to write him that check, it’s like, “I refuse to be under your thumb.” She never felt comfortable accepting that “gift” to begin with and the second that he throws it back in her face … oh man, I think Kim just cannot stand for people to make her feel indebted to them, or like she owes them something! But she does it with such a certainty and tells him, “You’re in the moral wrong, not me!” To me, that was a bit of a clinging to something — because she knows so much of her life has begun to operate in the gray areas and there’s a massive internal struggle going on. An unraveling.

But, you know, we all do that!

So, what’s Kim’s next move?

I wouldn’t be so awful as to spoil it for the awesome fans of the show. But, you know, it’s a reckoning that she has to accept. And we also have to think physically, emotionally, spiritually, intellectually …  what does having something like this happen to you … what does that do to you?

I love the way they wrote it, shot it, edited it, directed it because it’s not so much about the gore of an accident, so much as it is about being psychologically lost. And that’s what that super jumpcut did, I think: It shows people this idea of what could be so tragic in an accident. And for Kim, what’s so tragic about everything that led up to it is that feeling of utterly being lost. Just losing time and not really understanding how she got there, in the much larger sense of that. 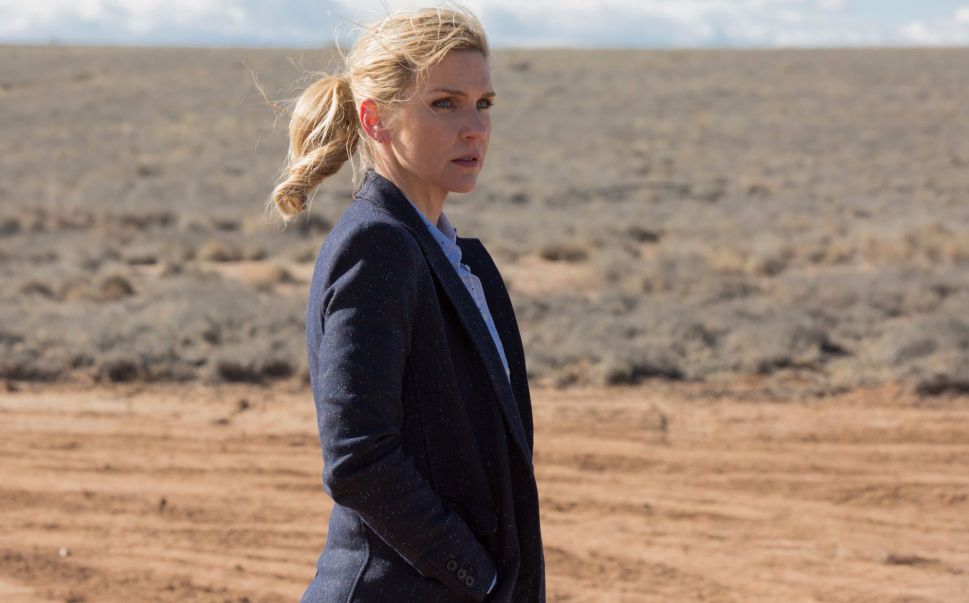