Senate Minority Leader Charles Schumer faced off with Majority Leader Mitch McConnell on the Senate floor last night over the Republicans’ closed-door crafting of a plan to repeal and replace the Affordable Care Act—shortly before Schumer’s 48-member Democratic conference inaugurated a marathon of speeches decrying the GOP’s approach.

Schumer reiterated his call for McConnell’s 52-seat caucus to meet with Democrats to negotiate an alternative to Obamacare, instead of continuing the majority’s current tack of working out a version of the House GOP’s American Healthcare Act through internal deliberations to ensure its passage with or without minority votes. Because the AHCA—which in its House incarnation would phase out the ACA’s expansion of Medicaid, cut its subsidies, rescind its requirement that large employers offer insurance, proffer tax credits and allow states to define what constitutes a “pre-existing condition” that insurers must cover—deals purely with fiscal matters, the Senate Republicans can pass it with a simple majority vote, depriving the Democrats of recourse to the filibuster.

Schumer acknowledged disputes “along partisan lines” over whether a new bill should abrogate Obamacare entirely or simply alter it while keeping its basic framework in place.

“But what we ought to be doing is discussing it with one another,” the top Washington Democrat said. “What is the harm in us gathering in the old Senate chamber, a hundred senators, Democrats and Republicans, and trying to maybe to come together? Is there any harm?”

“Maybe something bipartisan and helpful could come out of this, instead of this dark and hidden process,” he continued.

McConnell maintained that the Democrats would be able to push for amendments to the bill once his conference was finished outlining it, those such revisions would need a majority of votes. He would not, however, commit to giving the minority party more than 10 hours to review the legislative package in its entirety.

“There will be no, you know, failure of opportunity for anybody to offer an amendment, to get a vote on it, to try to change the law,” he said, repeating twice. “I think we’ll have ample opportunity to read and amend the bill.”

Schumer retorted bitterly “I rest my case.” Speaking later on, he suggested Republicans have negotiated in private because they are “ashamed” of the under-construction law.

The House passed its version of the bill in May. If McConnell can whip his conference into conformity and pass a similar measure—which would likely be softer and slower in its elimination of the ACA’s provisions—he and Ryan would have to negotiate legislation that would resolve differences but still satisfy their respective members.

The Senate Democrats intend to use measures like last night’s red-eye speech train to disrupt and prolong the legislative process and prevent the bill from coming up for its planned floor vote next week. Should they push it past the July 4 break, McConnell and Ryan would have only a few weeks to hammer out a mutually agreeable plan before both chambers recess until September. 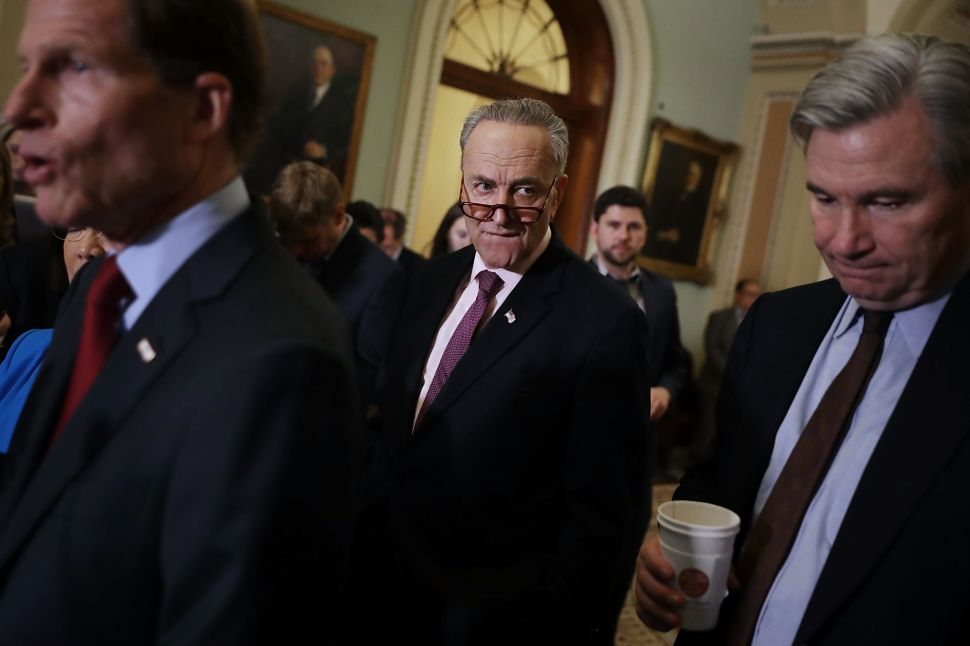