The remarks were hailed as a vindication by the Trump team. Comey admitted that, yes, he had told the president on three occasions that he was not under investigation, just as Trump had written in his termination letter.

CNN and others had reported that Comey was prepared to contradict the president on that point.

Comey also admitted in his written remarks, with some hedging, that Trump and his team never tried to obstruct any investigations. On that point, he agreed with the intelligence officials who had testified earlier that Trump never pressured them on the Russia probe. So much for the “another Watergate” narrative.

As with all things Comey though, these exonerating statements were hung with the crepe of personal drama, as he did contortions to pose as someone who does not compromise on principle.

That’s when it got weird.

He described a dinner with the president. At one point, the president asked him if he wanted to keep his job. Comey thought this unusual and an attempt to establish what he called a “patronage relationship.”

The president asked for his loyalty. Comey reacted as if the president had just touched his thigh under the table. “I didn’t move, speak, or change my facial expression in any way during the awkward silence that followed. We simply looked at each other in silence.”

Watch out, James. Your boss is going to start thinking you’re a nut job.

Instead, he offered his “honesty.” Stop there. Not many things are more offensive in conversation than an unsolicited moral pose. It assumes a nefarious intent on the part of the speaker.

To his credit, his host did not turn purple and call him an ass. He let him off the hook and accepted his “honest loyalty.” It was a clumsy formulation meant to express the obvious: That an invitation to loyalty is not a request to lie.

Which did not stop director Comey. He could not depart his Mittyesque world where the president of the United States was asking him to enter a conspiracy with the Russians. The statement was secreted into a memo to be used later, if he ever managed to get himself fired.

Then it got even weirder.

After the awkward silence and clumsy formulation, Comey proceeded to instruct the president on a “paradox.” Not a clarification or an explanation, mind you, but something more high-toned because that’s how he rolls when the president may be asking him to violate his scout’s oath.

The paradox is this: If Comey maintains loyalty to the discretionary decisions of the executive branch, the public loses faith in the FBI as an institution.

Say, for instance, the president tells him that FBI agents should step up, oh I don’t know, border enforcement. In Comey’s world, he is permitted to assess that request independently and even pursue a different set of priorities.

The problem with the paradox is that the FBI is not an institution. It is the arm of the Justice Department that carries guns, originally intended to stop bootleggers, that has survived long past its natural obsolescence by mission creep.

It is a bureaucracy governed under the Constitutional authority of the executive branch.

The presidency, on the other hand, is an institution, whose public trust was being eroded by a hackneyed story about the Russians coordinating with Trump to seize the office. The story was being fanned by leaks.

Trust of the presidency, and not of the FBI director, is what drives the republic, James.

Comey had been tasked for a year to get to the bottom of it. At the time of the dinner, he had not caught a leaker or ruled out even the most ridiculous rumors. Clearly, the president was trying to light a fire under him by addressing it directly.

Just as he would have done in his previous life if a shipment of concrete was delaying a building project.

And that, right there, is why Trump was elected. To blow through the preening self-importance of those who occupy Washington—Republicans, Democrats, bureaucrats, think-tanks—and to govern in a way that serves, radical thought here, the people of Pittsburgh over and above even the hero’s journey of James Comey.

Willfully unaware, Comey sat before the Senate Intelligence Committee looking dour and pained but firm in his righteousness. Once again, as he did with the Hillary Clinton email controversy, he had managed to hold the news cycle captive to his moral posing by not doing his job well.

At one point, he even likened himself in his live testimony to St. Thomas Becket and Trump to King Henry II, “Who will rid me of this meddlesome priest?” Puh-leeze.

The questioning was generally anti-climactic to his prepared remarks. Although Comey conceded to the president the right to fire him, he could not hide his utter offense that the president would presume to impinge upon his independence by doing so. Who does he think he is?

He would not say that the president obstructed justice, but he did nod in that direction.

That will be the headline that comes from his testimony. Except that it cannot be true. By law, the FBI director is not permitted to conclude that he is being asked to obstruct justice without reporting it to higher authorities. He did not report it.

Instead, he put it in a memo to be used to cause political damage to the president in the event that he was fired. In other words, a secret file to preserve political leverage. J. Edgar Hoover would have been proud.

Comey admitted that he had a friend release the contents of the secret memo to The New York Times to cause the appointment of a special counsel. He succeeded. This from the FBI director who professed utter independence from political considerations.

Later in his testimony, he offered that his decision to not appoint a special counsel for the Clinton email investigation is because they are inherently unfair; they give the public the impression that, as he said, “Ah-ha, there’s something there.” Did the same thought occur to him when he decided to leak his memo to The New York Times to cause the appointment of a special counsel for Trump?

For Trumpites, the takeaway from the live testimony will be that a former FBI director is able to cause the appointment of a special counsel with a well-timed leak. For Washington to work, that stuff has got to stop.

The Trump agenda is stalled upon these leaks and posturing. Now a special prosecutor, someone whom Comey obviously likes a lot, holds influence over a political agenda that voters delegated to Trump.

At what point does this become a refusal to accept the results of an election? 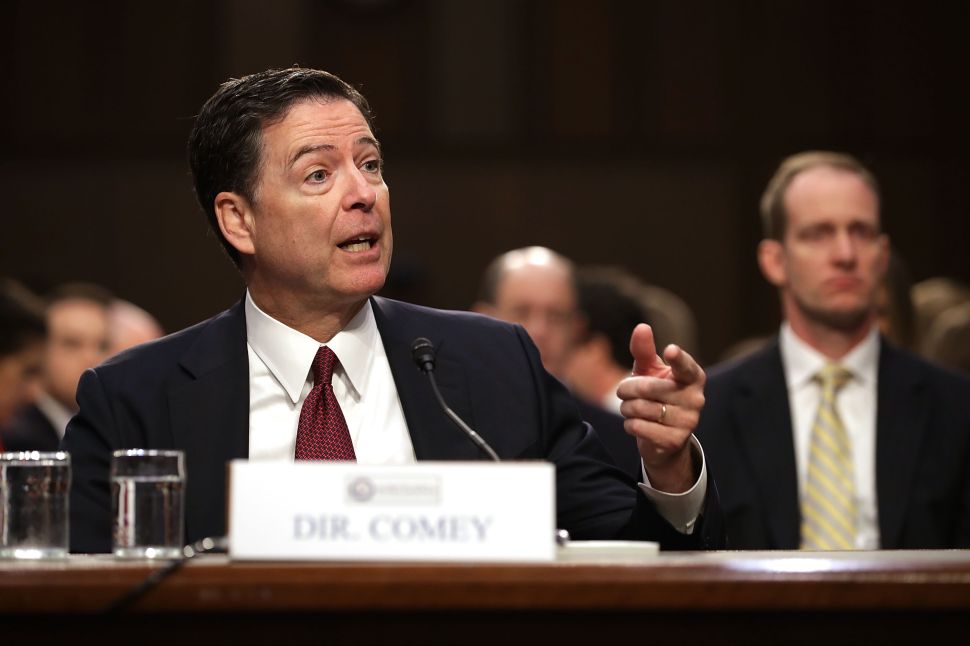