In a recent episode of American Dad! titled “Portrait of Francine’s Genitals,” Stan becomes enraged when a painting of his wife Francine’s genitals becomes the hit of an art museum. After several failed attempts, Stan finally acquires the painting and plans to sell it to the family’s cocaine dealer. However, when Stan realizes how much the painting inspires people, he returns it. The episode is gross and ridiculous, but it works. And though it’s gross, it’s not grotesque like some of the things on MacFarlane’s other show, Family Guy.

When American Dad! started in 2005, many thought it was a second-rate show that was trying too hard to be the new Family Guy. That’s quite ironic since the show has lasted 14 seasons, and many say it has become better than Family Guy, a show that has been criticized for losing its edge.

The reality is that it’s a lot more difficult for a show like Family Guy to remain relevant than it is for American Dad!, which produces the majority of its laughs from well-developed and twisted plots. For years, Family Guy brilliantly produced its laughs through cutaway gags, flashbacks, and pop culture references. When MacFarlane interrupted a Season 10 episode with Peter spending five minutes fighting a chicken, few questioned why. Instead of accusing MacFarlane for doing something desperate due to not having enough material for a full show, people laughed.

Who could ever forget the Family Guy cutaway where Foghorn Leghorn met his demise by thinking it would be smart to walk into KFC? Then, there was the Osama Bin Laden terrorist video, where the biggest villain from the 2000s makes fun of himself. Though it could have offended people still sensitive about the 9/11 attacks, the gag worked. But depending on providing these types of gags set the show up for failure since the concentration was never on the plot. Now that the cutaways don’t work anymore, we are left with desperate plot lines that include Stewie and Brian having babies, characters cheering on the 9/11 attacks, and all the stories that include Meg being humiliated, bullied, and body-shamed, which we’re supposed to laugh at.

While the characters in American Dad! have evolved, the same cannot be said about the ones in Family Guy. For example, when Dad started out in 2005, Stan was the Xenophobic and unlikeable husband/father. He has become a lot more likable as the show has progressed, and he didn’t need to get rid of most of his conservative politics in order to become a better person. At first, he despises his son Steve, but he gradually learns to accept that he is a nerd. Stan even tells Steve he needs to be less Eurocentric in a later episode—something this arch conservative would never dream of saying when the show first aired.

Family Guy’s Peter Griffin has changed too, but has become more of a pariah. This wouldn’t be an issue if Peter wasn’t likeable when the show started. His inadequacies and constantly putting his foot in his mouth were forgivable when the show started because the viewer could identify with him. Now, the father who electrocutes and makes fun of his daughter for being masculine is a monster.

American Dad! resident alien Roger has become more insufferable as the show has gone on, but the viewer doesn’t care since he’s always been such an “out there” character with many different costumes and personalities. Besides, not only are Roger’s actions more forgiving as an alien, but we learn in the Season 4 episode Franny 911 that Roger isn’t meant to be nice, and when he tries, it nearly kills him (literally and physically).

Besides being betted developed, the American Dad! characters interact better with each other. The fact that they are all opposites of each other helps, especially because they all work together as a team: Stan is the tough, conservative husband, while his wife Francine is ditsy and sometimes allows people to walk all over her. Their son Steve is a nerd, while their daughter Haley is an outspoken hippie whose liberal beliefs clash with her father’s conservative views. These personalities help American Dad! create more interesting plot lines, dialogue and themes than Family Guy‘s.

There are still people who won’t give American Dad! a chance because they think it’s a Family Guy rip-off. This may have been true at first when the show debuted, especially because nobody predicted the cancelled Family Guy would come back to life. However, over the last five years, American Dad! has come into its own, and, according to many, is the best animated show on television. Although Family Guy began Seth MacFarlane’s career, his greatest achievement will always be American Dad! 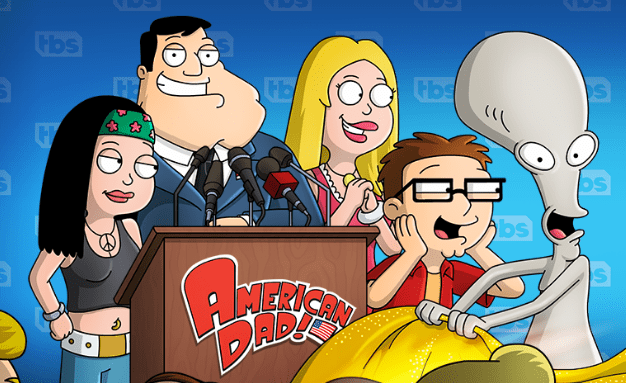