Sexism in tech and science is always a hot topic—just this week a physicist had her theories mansplained to her onstage until someone defended her.

But this issue is just as prevalent in the business world. For proof, look no further than the PRWeek Hall of Femme conference, held last week in New York.

As the name suggests, the event was a celebration of notable women in public relations and an acknowledgement of the struggles they still face. For example, men in PR make about $36,000 more than women.

The PRWeek honorees still wanted the male perspective, however, because “men need to be involved in this discussion too if real change is to be achieved.” While in theory this may be an admirable idea, in practice the panel of four men featured at the conference set off many red flags online.

Richard Edelman, CEO of an eponymous firm that is the largest independently owned public relations agency in the world, received most of the criticism for telling women to “speak up more loudly.”

Edelman recalled that he asked the women on his executive team why they didn’t talk during meetings, and they said it was because of the room’s “macho culture.”

“I asked them, ‘How are we going to fix that? Either you’re going to speak up, or I’m going to have to hammer the guys,’” Edelman said. “They said, ‘Hammer the guys first,’ and I said, ‘You speak up first.’”

That’s right—he told women to speak up, they told him what they wanted and then he told them they were going about it the wrong way.

Edelman admitted that guys “talk loudly,” but that shouldn’t discourage women from going to management if there’s a problem—never mind that he, as a management figure, had just demonstrated why that approach doesn’t work.

Some PR pros didn’t even take womens’ experiences into account, however. John Brockman, global head of marketing and communications at State Street Global Advisors, recounted how a female employee had made her case to lead a new project.

“She said, ‘You may not remember, but I have worked in TV news, I have been at a PR agency, I have corporate experience,’” Brockman said. “I had forgotten about that.”

While Brockman no doubt admired the employee’s initiative, he gave no indication that he apologized for conveniently “forgetting” her background.

Women may not have been present during this PRWeek panel, but they certainly made their voices heard online. Many of them commented that the organizers of a public relations conference should’ve considered this panel’s problematic optics:

Errrrr. How the f*** are women supposed to speak up if they're not even on the f******g panel? https://t.co/yv0DHB8ovh @EdelmanPR #mansplain

So @prweek, you put 4 dudes on a panel at an event called "Hall of Femme," then they tell women to "speak up"?https://t.co/2dj53gZuzo pic.twitter.com/vfrUnhxSV3

Hey @richardwedelman, is this loud enough for you? Is there a number I can call to *speak up* to you? https://t.co/hTytjlsveE

To their credit, women at the event hit back at this rhetoric, especially Pam Wickham, vice president of corporate communications and affairs at Raytheon.

PRWeek editor-in-chief Steve Barrett said the panel in question was one part of a “constructive and productive day and celebration of female executives.” He also reiterated that this panel was requested by the Hall of Femme.

“People have seen one tweet and aren’t aware of the full context,” he told the Observer.

Note: This story has been updated to reflect that Pam Wickham made her comments at the event itself, not in a blog post. The photo has also been changed. 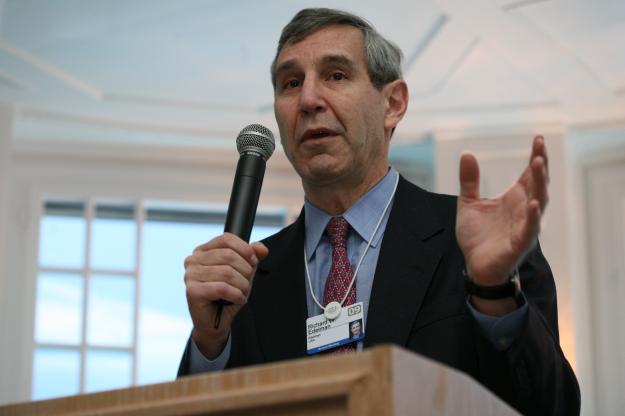