There was one scent that permeated the MADE LA fashion festival this weekend. And it wasn’t Le Labo’s ubiquitous Santal 33 perfume, nor was it Chanel No. 5. Instead, the event deck at LA Live was, at times, heavily perfumed with weed.

Not usually an accessory on a fashion runway, the not-s0-illicit substance was actually a rather fitting addition, considering rappers Snoop Dogg and Wiz Khalifa were the headliners of the weekend. The rappers weren’t debuting collections of their own, but rather working alongside well-established brands of the West Coast variety. And they brought some joints to celebrate the occasion.

Snoop Dogg’s partnership with Joyrich was notable for a few reasons. For one, it was the first time the rapper has put his touch on a fashion collection since his Rich And Infamous clothing line shut down in 2010. It also marked the design debut of his son, Cordell Broadus, who was the creative director for the range of plaid PJ pants, fuzzy hooded jackets and sweatpants with one leg rolled up. And seeing as all good things happen in threes, this range also marks the 10 year anniversary of Joyrich, the street wear label founded by Tom Hirota.

While girls in bikinis gyrated alongside the cars, duos of models casually strolled by, all of whom wore socks with their shower slides. It may have been as far from the traditional runway stomp as one could get—with Snoop Dogg DJing from a booth in the middle of the floor—but it still entertained and enthralled the audience.

On the other hand, it would be generous to consider the fruits of Wiz Khalifa‘s collaboration with 424 and Pleasures to be actual fashion. The range was mostly just yellow sweatshirts with “Four Two Four” spelled down the arm and a pair of black sweatpants from Pleasures with a stripe of checkered fabric down the side. But at least the rapper performed on an actual elevated catwalk. He even donned an iteration of the aforementioned outfit, but his sweatshirt was of the zippered variety. Fans of Khalifa might recognize that the colors of the clothing paid homage to one of his most famous songs: “Black and Yellow.”

Of course Wiz Khalifa entirely abandoned his shirt and sweatshirt to rap alongside the rest of his Taylor Gang crew, including Juicy J and Ty Dolla $ign. And yes, they did light up while performing hits like “We Dem Boyz,” encouraging the rest of the sold out theater to also light their joints. It was truly audience participation on a higher level.

For years, the fashion industry has pondered how to turn the traditional fashion show setup into something more interactive and something that pertains to more than just the front row of top editors. Now we know the answer: just bring in some rappers. 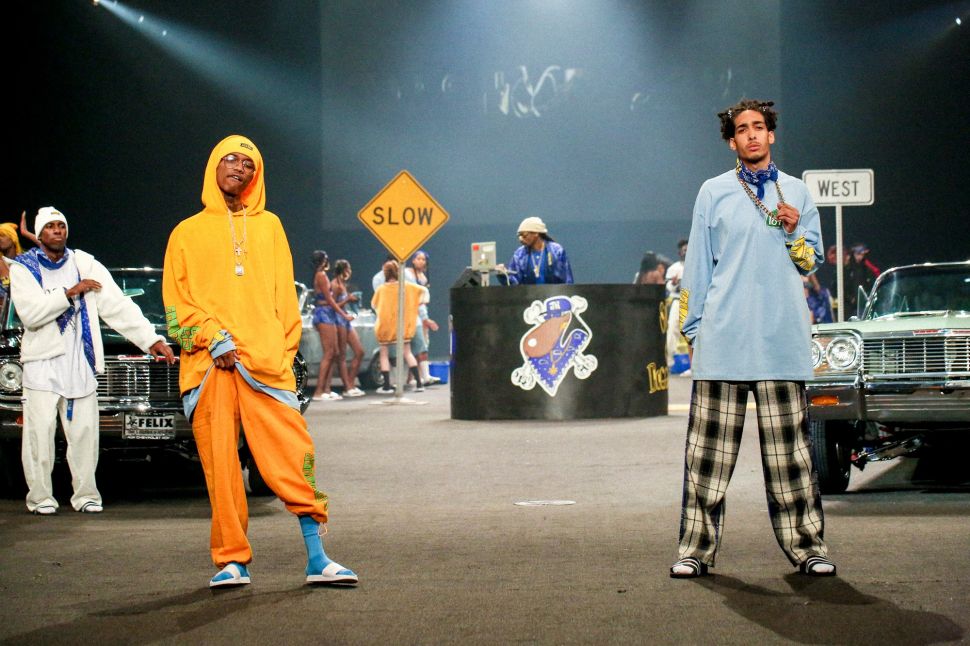