The Observer office is near Wall Street, so there’s something about going into Super Mario Odyssey‘s New Donk City and jumping Mario onto the head of a grey-suited businessman. If you do it just right and don’t touch the controllers after, Mario continues to bounce from his apparently very springy shoulders, bopping like a perpetual motion sculpture out of a working man’s fantasy.

Pretty much everyone in New Donk City dresses in a grey suit. Even dancing it up at a rock concert, Donk dudes rock grey suits and 1930s detective hats. Mario, Nintendo’s icon, stands about hip height to the city’s residents, with proportions more like one of their babies. But he’s the one to save this universe, not the city’s oblivious alpha males.

Mario doesn’t exactly come off as an imposing figure. Halo’s Master Chief or Mass Effect’s Commander Shepard are way more badass than Mario. In fact, I’d say that the iconic plumber isn’t badass at all. He has not one hint of badassedry. He’s badassless.

And that’s his charm.

I have to be honest: I’m sick of posturing tough guys. I’ve been sick of them for a long time. The last good one was Bruce Willis as John McClane in Live Free or Die Hard. When he launched the car into the helicopter, that was the last good trick in the larger badass enterprise. So long. Goodbye. It’s been real.

My lack of affection for macho dominance, steely resolve and testosteronal posturing is one of many reasons why I haven’t really been that into video games since the original Nintendo Entertainment System. Ever since game consoles went beyond 8-bits, they’ve devoted most of their excess processing power to to adding more sinew on game heroes, and I just can’t be bothered.

SEE ALSO: The Nintendo Switch game that will either save your relationship or destroy it

Today I got to play a couple demo samples from the next entry into the Mario franchise, Super Mario Odyssey, due out from Nintendo in October. It won the Game Critics Award for Best In Show at this year’s E3, according to Polygon. Odyssey is based on an open world concept. Go any direction. Interact with lots of stuff. The first surprise happened for me when I was in the city level, went to jump on a taxi cab and found myself standing on top of a light pole instead (Mario may have super stubby legs, but he can really jump). I knew the world was open but I didn’t expect to be standing up there.

I had my second crazy Mario moment in the second level I played, the sand kingdom (which is filled with characters much more on Mario’s scale, a race that looks like it evolved out of a Mexican Day of the Dead celebration that never ended). Even though it’s a 3D game, every now and then it slips into 2D. Mario goes through a pipe and he’s the 8-bit Mario I remember from elementary school. That interlude doesn’t last that long, but helps to underscore that the game makers wanted players to feel that anything was possible.

The game’s meant to build on expectations and defy them, or reveal expectations that you hadn’t realized you had.

I don’t think I would have ever discovered the last innovation in the game if a staffer from Nintendo hadn’t shown me: motion sensors in the controllers let you throw your hat in different ways. Mario’s main weapon is his hat, Cappy. Like Oddjob in the 1959 James Bond classic, Goldfinger, Mario can throw his hat from his head to take out his enemies. It’s easy to throw Cappy using one of the buttons on the controllers, but you can also actually move the controller to execute special throws, like looping Cappy in an expanding spiral around Mario or rolling it like a frisbee on its side across the floor.

Mashing buttons has always felt abstract to me. Moving your hands to command an avatar on the screen, that feels a lot more real.

Mario seemed to have a lot more tricks I wasn’t shown and didn’t find, but discovering those surprises is the real objective of Odyssey. The game has that feeling of a sprawling real-time adventure with plots and sub-plots not unlike a lot of the big open world fantasy adventures that have been huge hits, but it’s skinned differently. Rather than painting a brooding, dystopian, dangerous atmosphere over what really amount to a bunch of action puzzles, the company has chosen to make them bright and zany.

That makes a real difference in the experience. The difference for me was relief.

It’s crazy to see how many titles Mario has appeared in since he first appeared in Donkey Kong, but I’ll never forget the first time I found myself in the level in the game that made him a superstar, Super Mario Bros. Our hero swam his way to Bowser’s castle, rather than running and jumping like he usually did. It blew my still forming brain. Super Mario Odyssey has aimed squarely at giving players that same sense of dopamine-jolting surprise again and again. 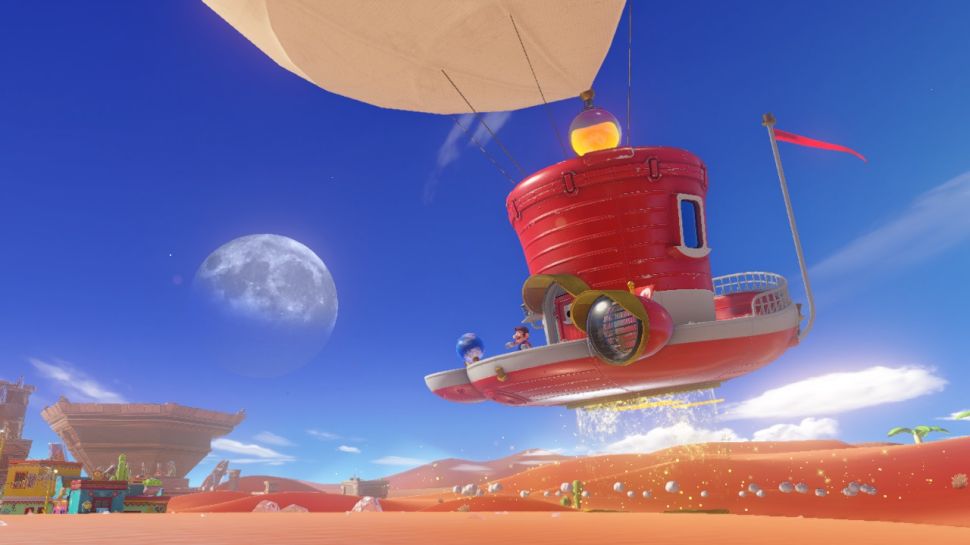