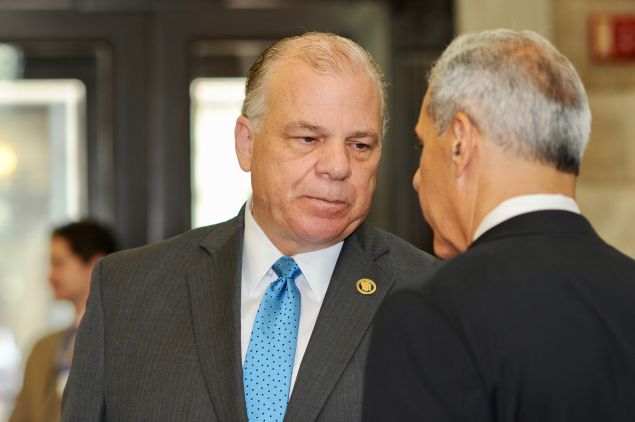 Facing criticism from the left and right over his school funding proposal, Senate President Steve Sweeney defended his plan on Monday and said schools that would lose state aid have seen declines in enrollment.

Sweeney and Assembly Speaker Vincent Prieto reached an agreement on school funding last week that would redistribute $46 million in so-called adjustment aid, redirecting some money from districts considered to be overfunded under current law and giving it to underfunded districts. On Monday, Sweeney’s office said 46 of the 50 schools that would lose the most money under the proposal are down in enrollment.

“As we’ve crunched the numbers, what we realized was when you hear districts are losing money, they don’t have the kids,” Sweeney (D-Gloucester) told reporters in his office. “(The school funding formula) is about the money following the child. We didn’t target one over the other. We just ran the formula.”

A mix of liberal groups, unions and Republican lawmakers voiced skepticism of the plan last week. Seventeen organizations, including the Education Law Center, Our Children/Our Schools, Advocates for Children of New Jersey, New Jersey Policy Perspective and the Garden State Coalition of Schools, urged Senate Democrats in a letter Thursday not to make changes to the SFRA until after the state finalizes its budget. Some Republican lawmakers said the agreement disproportionately hurt their districts. And leaders of the state’s largest teachers union, the New Jersey Education Association, called the deal a “sick scheme.”

“How about talking about some of the districts that are actually going to benefit?” Sweeney said. “Is it sick to allow districts to end freshman sports, sophomore sports, take away music and art? Is that sick too? Because I don’t hear anyone hollering about that.”

The Sweeney-Prieto plan would also provide $100 million in additional school aid than what Gov. Chris Christie has proposed and an extra $25 million for preschool education. But the plan does not have the blessing of Christie, who is willing to consider the proposal but “has concerns about fairness,” according to his spokesman.

Sweeney said he plans to meet with Christie this week to discuss the state budget. He has said he won’t pass a budget without an agreement on school funding, something that could lead to a state government shutdown if the state doesn’t have a budget when the next fiscal year starts on July 1.

“I don’t expect (Christie) to agree with what I presented, but I think he would agree the adjustment aid needs to start to move,” Sweeney said. “I hope we have a solution, but I have no idea at this point.”