Tel Aviv’s annual Gay Pride Parade drew more than 200,000 people to the streets on Tuesday June 13. Members of the LGBTQ community and their allies from around the world celebrated along the beach, marching for values of freedom, tolerance and democracy. Their stories are heartbreaking and heartwarming.

“Being a supporter of the LGBT caused me many problems, not only in my community, but in my family as well, as I am a Muslim advocate for LGBT rights who lives in an Arab village near Akko. It’s really hard to stand for what you believe in. They’re boycotting me in my village and inciting against me in mosques.

For me, standing with the LGBT flag at the parade is an honor, because we call for human rights. At the parades, you see children, teenagers, women, men, religious people, and people from different political parties. You see Members of Parliament and ministers. They have nothing in common except for one thing—being human!”

“I expected to get flack for ‘coming out’ in support of the gay community as an observant, Orthodox Jew, but I was happy to see a community of support from religious people. Most of the people who liked my Facebook photos of the parade were religious Jews. I even had likes from Haredim. They are becoming much more open and supportive.

I believe in following the essence of the Jewish practice rather than letter of the law, which was interpreted. I believe in ‘live and let live,’ which I believe reflects the spirit of Judaism.

I went to pride as a straight ally because I support gay rights and people living their truth. I have great respect for the gay community because they face so much hardship to come out and be themselves. I want to help them and fight for equal rights in Israel, because we are a democracy, not a theocracy, and I’m proud of it.”

“I am a gay atheist from a Catholic family in Lisbon, Portugal… There has been a dramatic improvement in LGBT rights and support in Portugal in the last decade but many people are still afraid and ashamed to come out to their families, friends and co-workers. Straight people in Portugal do not usually take part in pride parades—except left-wing political activists and some relatives of LGBT people—unlike in Tel Aviv. It was very impressive to see so much involvement from politicians on the left and the right right and also from straight people and some religious people.

Israel is one of the most progressive countries in terms of LGBT rights in the world. I am especially impressed with the existence of shelters for LGBT youth expelled from their homes. We have been trying to have that in Portugal for years and have failed. LGBT people have families and marriages that are recognized by the government and there are transgender pop stars admired and loved by the people like Dana International.”

“I attended the gay pride parade for the first time in Tel Aviv. If I could compare it to anything it would be the gay Mardi Gras of the Jewish identity. There were beautiful costumes, huge floats, amazing dancers and fantastic music. I think the most striking effect of the parade was how carefree everyone was. Day to day, Israelis live with muffled fear and anxiety. In a world where a stabbing or car ramming could happen at any moment, my Israeli brothers and sisters deserved this moment of solace. Between the day drinking and fierce sunshine, I looked out to the parade and the people and stopped.

The controversial politics surrounding this country could be summed up in this very parade. The essence of Israel is a safe haven for individuals to exist as they choose, in an area where that is rarely the case.”

Giovanni Franco shared the sentiment written by his friend, an Orthodox mother of a gay son who participated in the parade:

“I have, Thank G-D, four healthy, beautiful children. They all grew up in the same Orthodox home, with the same parents, and went to, for the most part, the same schools. My third child, my middle son, is in the army. He is named after my father, looks like my mother, and we’re both told pretty regularly that we look like twins.

Three years ago, our son came out as gay. We were surprised—and not. We cried, wept in fact, and struggled. Sometimes, we still struggle. Our dreams of what was ‘going to happen’ changed completely. He came out the same summer ‘the three boys’ were murdered. When news of their murder broke, and I’d already cried for so many reasons that month, something dawned on me. At the end of the day, and the beginning and the middle, my son is alive. I can hold him, hug him, tell him to put his laundry away, and kiss his cheeks whenever I want to. Those mothers? They visit a grave.

Is it hard to be the Orthodox mother of a gay child? Sometimes it’s damn hard. Has his religious practice wavered? Yes.

I learned from a friend who is in the same boat and got there years before, that my son’s relationship with G-D is just that: his. He is committed to his Jewish identity as well as that of a gay man. I choose not to focus on his future sexual activity the same way I choose not to think about any of my kids’ activity. Straight or gay, it isn’t my business, and why would I want it to be? They’re my children, for crying out loud!

My son attends the gay pride parade every year. It’s a place where he feels like a person and not a ‘token’ or leper. He doesn’t walk through the streets of Beit Shemesh sporting his ‘gay agenda’ because he doesn’t have one. He’s the same pain in the neck older and younger brother who will defend his siblings to the end. And he has a heart as big as the world and shows compassion in ways many older folks can’t.

My son is a human being. He is a Jew. He is a soldier. He is a gift. He was created in G-D’s image (and my parents’), and I will love him always—no matter what.

You can judge him and me as much as you want. I know who I am and where I stand. And as a young adult in an Israeli army uniform, he knows what he stands for—and that includes the people who hate him because of his sexuality.

For those who so openly share their detestation, I can only conclude with this piece of eloquent literary wording: It sucks to be you.”

Eliana Rudee is a fellow with the news and public policy group Haym Salomon Center. Her bylines have been featured in USA Today, New York Daily News, Forbes, and The Hill. 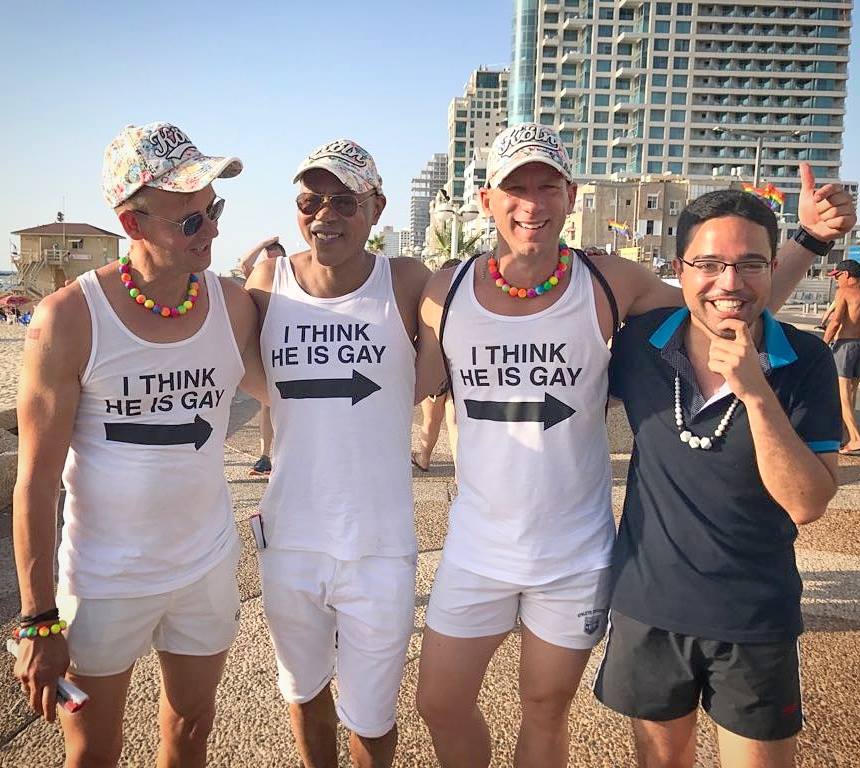