Late Afternoon. A woman, CHRISTINE, sits sipping espresso at a table with two chairs in the window of a coffee shop. There’s a duffel bag at her feet. A man, TONY, wearing a backpack, approaches her.

Christine: Nice to meet you in person!

Tony: Yeah, you too. You look just like your picture.

Christine: Yeah, you too.

Christine: Why, did you think I was catfishing you or something?

Tony: Well, I didn’t think you were, but I didn’t know for sure.

Tony: Pretty good. Busy, and I didn’t get much sleep last night, so I’m a little—

Christine: Oh, we could have done this another time if—

Tony: No, no. I wouldn’t have missed this for anything. I’ve been looking forward to meeting you.

Tony: Yeah, I was up late last night watching this show, The Leftovers.

Christine: Dude, I love the The Leftovers!

Tony: Did you watch the final episode last night?

Christine: You know I did.

Tony: What did you think?

Christine: I liked it. I’m still processing it, probably.

Tony: Is that a turn-off?

Christine: Wow, someone is forward.

Tony: That was a joke.

Christine: Sure it was.

Tony: How good was Carrie Coon?

Tony: If she doesn’t win an Emmy this year, the voters should be dragged out of their beds into the street and forced to explain themselves.

Christine: No, I agree. I’ll do the dragging. I don’t know how she manages to get across so many complex and conflicting emotions with just, like, her eyes.

Christine: Did you think that maybe, when they cut to the old version of her, that we were seeing the afterlife, or the Departure world, or something?

Tony: Yeah, for a second. I thought it could have been some kind of dream world like the one Kevin went to last week, too.

Christine: Yeah, me too! Because when Kevin shows up and he, like, doesn’t remember her, it’s kind of like how he saw Evie last week but her memories and everything were different.

Christine: And then Nora calls Laurie, and it’s like, I definitely thought she was dead, so maybe this is the afterlife.

Tony: Yeah, I thought the same thing, at first.

Christine: I felt like the people who make the show were fucking with us, like they knew we were going to be looking for hints and explanations so they put in all this stuff to play with our heads.

Tony: That whole wedding scene was something, actually.

Christine: Yeah. It was kind of neat that the show spent so much time over the last few seasons exploring the rituals people come up with to cope with being at loose ends, and then this episode took the time to explore this ritual that’s all about happiness and new beginnings.

Tony: Have you ever been married?

Christine: Is that cool?

Christine: It’s fine. It is cool. All the cool people get divorced.

Tony: Yeah, right? Like, I bet James Woods is divorced.

Christine: James Woods is your idea of a cool person?

Tony: I don’t know why I said that.

Christine: You could have named anyone in the world and you name James Woods?

Tony: I don’t know why that’s the name I came up with. I’m so weird.

Tony: Hey, do you know if that stuff with the pigeons and the goat are typical of Australian weddings?

Christine: I have no idea.

Tony: I should look that up.

Tony: I don’t know why I said James Woods!

Christine: Okay. It’d be cool if you were.

Tony: I swear, I’m as liberal as it gets.

Christine: That wedding scene, though.

Christine: I really couldn’t tell if Kevin was crazy or lying or what.

Tony: Yeah, because watching it again you really see how, like, fragile he is, and how he’s trying to keep this ‘fresh start’ going.

Christine: I should watch it again. The way he kept saying, “I was on vacation…”

Tony: It’s a little creepy, but so much about this last season has been about how people tell themselves stories or try to, like, craft a narrative for themselves.

Tony: I really thought they were going to kill that goat, though.

Tony: And then later, I was like, maybe there’s a scene in season one where Nora talks about having a dream where she rescues a goat from barbed wire and takes it home, and that’s how she imagines heaven, or something.

Christine: Ha. I don’t think there…

Tony: No, there wasn’t.  But did you think that the dude climbing out of the nun’s window was going to be…

Christine: Yeah, I did think that for a second.

Tony: That would have been cool.

Tony: I’m so glad you’re into this show.

Christine: Me too, I don’t have many people to talk about it with.

Tony: Me neither. I just read all these recaps online.

Christine: Me too! Do you read the one in The Observer?

Tony: He just gets it. You know?

Christine: Totally. And he’s handsome, too.

Tony: Damn, you looked him up?

Christine: I got curious.

Tony: Handsome by TV recapper standards, or like really handsome?

Tony: Wow. Should I feel threatened?

Christine: Hm. Remains to be seen.

Christine: What did you think of the story she told Kevin, about going through?

Tony: The idea that the people who Departed don’t know they Departed blew mind.

Christine: But they didn’t depart, kind of, right? To them, 98% of the world’s population departed. So the characters on this show are actuallythe lucky ones!

Tony: That’s the part that made me cry. Do you think her story is true, though? About going through and coming back?

Christine: Yeah, I believe her.

Tony: Yeah, but what if that’s just another story, like Kevin’s story about being on vacation?

Tony: Everybody lies, though.

Christine: Interesting thing to hear you say on a first date.

Christine: So you don’t actually think James Woods is a cool guy, is that what you’re saying?

Tony: Is that going to haunt me for as long as I know you?

Tony: Wow, you really hold on to stuff. I’m starting to get an idea of why you’re divorced.

Christine: Actually, you might have a point. My ex-husband did say I held on to stuff too hard. Of course, he was having an affair with my step-brother, so—

Christine: It was rough. But it…there were things in my marriage I could have done differently, I guess.

Tony: I feel like I’m not really being my best self, here.

Christine: Don’t worry about it.

Tony: What part of the show did you cry during?

Tony: Where he tells her he believes her?

Christine: Yeah, and when the birds come home.

Tony: That was nice.

Christine: Yeah. Because…well, remember how, over and over this season, there were moments where technology went all weird around Nora?

Christine: Yeah, when she was checking in, and then the security gate—

Tony: She freaked out and broke it.

Christine: Yeah, and then in this one the bathroom door wouldn’t open, and she broke it down, too.

Christine: And then, after the wedding, her trained birds all vanish and don’t come home to roost.

Tony: She can’t catch a break.

Christine: Yeah. So on one level all that stuff is, like, the people who write the show dramatizing her anguish and frustration or whatever, right?

Tony: I kind of got the sense she decided to go see Kevin at the party after she broke the door down, like somehow breaking the door down helped her realize she wanted to see him.

Christine: Same here! And then her birds are gone, but once she and Kevin are finally reunited and on the same page at the end, they come back.

Christine: So maybe what that means is that all along, whenever things haven’t worked out for her or there’s been some strange obstacle in her way, it’s been because she’s been out of step with the—

Tony: Like maybe God’s been prodding her in the right direction or something?

Christine: Well, not God, though. Because…that guy David Burton, he says he’s God, right? And he’s shady and ultimately we’ll never understand his deal. At the end the birds come back to Nora once she reconnects with Kevin, and it’s like order has been restored to her life…like she’s in synch with the universe. That means there is some…consciousness, or guiding hand, you know? And you might call that God, but putting a name on whatever that is, that’s applying a narrative to it, and a narrative can be distorted or used for, like, self-serving purposes.

Christine: Am I making sense?

Christine: So, what if what’s really happening at the end is that we’re seeing the culmination of this voyage that she’s been kind of goaded along all this time, and it seemed like this was a show about people dealing with loss, but it’s really been a show about the universe conspiring to get these two people into the right position so they can have a meaningful relationship?

Christine: And that no matter what narrative you craft for yourself—

Tony: It’s like you’re creating a subplot inside this larger narrative.

Christine: Yes! And you can make that subplot as miserable as you want, but the larger narrative is driving towards a happy ending.

Christine: Don’t you want to live in a world like that? Where everything might seem so chaotic and mysterious, but really there’s something benevolent looking out for you?

Tony: Yeah, I’d like to live in that universe. You’d be on the verge of making a crack about your date’s divorce and suddenly a car alarm would go off and drown out your voice.

Christine: You’d be about to cite James Woods as the coolest man alive but a big bird would swoop down into your face and stop you.

Tony: Yeah, that would be nice.

Christine: Of course, the thing about living in a world like that is that you’d never know it.

Tony: Yeah, maybe we are, and this could be going way worse.

Tony: You never do.

Pause. The coffee shop MANAGER, a middle-aged woman, approaches them.

Manager: We’re just getting ready to close, ya’ll. You’d better hurry if you’re going to make it someplace safe before the Purge begins.

The manager walks away.

Christine: I know, I can’t believe it.

Christine digs into her duffel bag, Tony roots through his backpack. Both take out rubber werewolf masks and machetes, then pause to take note of this coincidence.

Christine: You Purge as a werewolf, too?

Tony: You’re not going to believe this, but I usually wear a hockey mask and the strap broke, so I bought this on the way here.

Tony: I swear to…well, it seems weird saying God, now. But I swear.

Christine: I believe you.

They stare into one another’s eyes for a beat and smile before donning their masks. 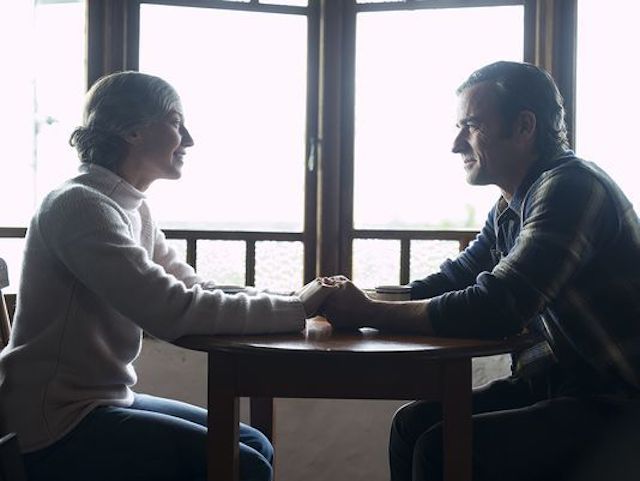