We open at the police station where everyone’s trapped inside by the Mist. They’re also very freaked out by the corpse with cockroaches crawling out of it, so they decide to take a chance outside with the Mist. Meanwhile, Heisel (the police chief who isn’t dead yet) just takes off in the one police car they have, and he promptly hits a moose. The car is messed up so he runs into the church, which happens to be nearby. Inside, Nathalie is still very much reeling from seeing her husband be shot and killed.

Back at the mall, where everyone just watched a woman get her jaw ripped off and then killed by the Mist. The mall manager (who didn’t see this happen) wonders if maybe a bear is what killed the woman. Man, this is a grim show. He makes the executive decision to lock all the doors in the mall so nothing gets in. This seems pretty smart!

Back at the police station, Mia turns out to be a drug addict. She finds some pills she wants to take with her when they take their chances outside. Bryan (the soldier) won’t let her.

Here’s the solution they come up with: They find a drone with a camera to fly into the wing. Who gets to pilot it? Jay. Meanwhile Eve and Alex watch on together (Jay has been accused of raping Alex, in case you forgot.) This is pretty unpleasant to watch happen. They eventually find the source of the leak (an open window) and also the body of a man who managed to begin writing something in his own blood before dying. I’m not 100% sure how this happened. Another thing nobody’s 100% sure about? What it was he was trying to write. Guesses include “amo,” “arr-something,” and “Anna.” To my eye honest to goodness it looked like “AMC” which would be pretty funny I think. The drone gets broken somehow so we’ll never know. The mall needs to choose someone to go run into the wing and get the radio to call for help. They decide to figure out who this lucky person is by drawing straws.

Back at the police station, the crew successfully makes it to a cop car, gets inside, drives for a bit, then almost gets carjacked by a man wielding a gun. Mia evades the man by slamming on the gas and hitting him and then gunning it while everyone begs her to slow down before she eventually just flips the car over. Smooth. They all get out of the overturned car and stumble into the Mist. They hear church bells and decide to run towards that, because why not. Mia realizes they left their guns in the car and turns back to get them where she’s confronted by a woman who claims to be her dead mother. Bryan turns back and gets her before anything bad happens.

They make it to the church and Chief Heisel’s there. Everyone’s mad at the chief for abandoning them back at the police station. Meanwhile everyone else in the church just wants to know what the hell is going on out there in the Mist, which is understandable.

At the Mall, Eve chooses the short straw, so she has to go into the Mist-filled wing to retrieve the radio. Eve is definitely not going to die, but some dude who we just met this episode stupidly decides to join her, so he definitely will die. Even and Random Dude make a run for it through the Mist and find the emergency radio. It’s working.

Mia is going through intense withdrawals at the church. She confesses to Bryan that she saw her dead mom in the Mist, but chalks it up to her withdrawals.

Eve and Random Dude start calling through different channels on the emergency radio. Random Dude inadvertently reveals he has a gun and may not be who he says he is. He starts calling for “Arrowhead” on the radio, along with some code. This freaks Eve out and they get in a knock-down-drag-out fight for Random Dude’s gun. Eve gets the upper hand somehow and shoots and kills Random Dude. Goodbye Random Dude. She runs back out to the mall, out of the Mist. She lies to the other people in the mall about what happened. Random Dude’s friends are acting a little suspicious which Eve notices. These people probably know what the Mist is all about. By the way, it’s not clear to me how nobody heard Eve shooting Random Dude.

Back in the church, the priest convenes his congregation while Nathalie acts extremely sinister. She delivers a tribute to her dead husband Benedict that also comes across as a little sinister. Bryan confessed to Mia that he also saw and heard the old lady Mia thought was just in her imagination.

Back at the mall, when Jay finds Random Guy’s suspicious friends — they’ve hanged themselves. Yikes. 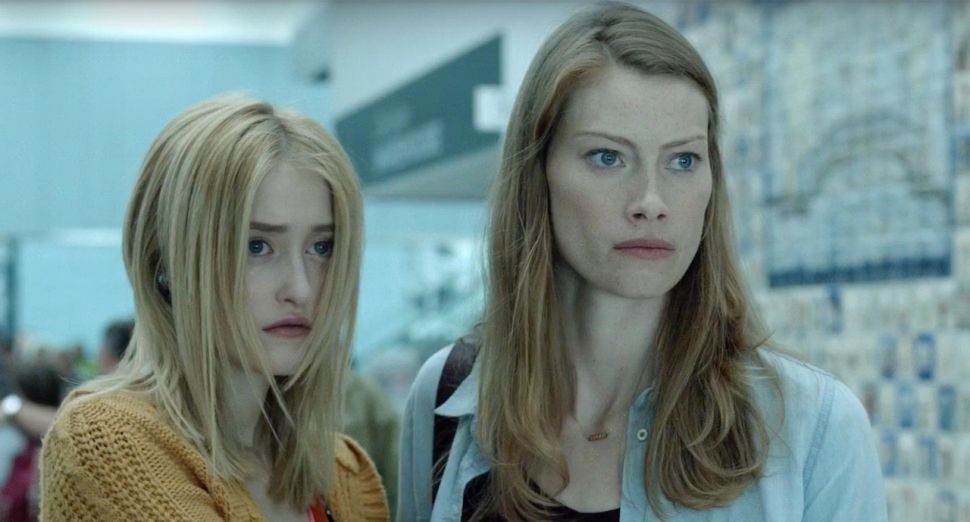