(Hi, my name’s Chris and I’ll be recapping The Mist for you. Background: While I have no read Stephen King’s novella, I am a big fan of Frank Dabont’s film adaptation — clumsy dialogue and bad CGI and extremely divisive twist ending and all! I’m very intrigued by this television series, despite its mixed reviews in the press.)

We open with a VERY OMINOUS close-up of a spider crawling on camouflage, and then a man’s face. It’s a soldier waking up alone in the forest. He doesn’t seem to remember who he is or who the dog accompanying him is. Brian (the soldier) chases the dog into a mist (uh oh!) and Rufus (the dog) is quickly dispatched within a gruesome, unseen manner. Brian is rightfully very scared. There’s something in the mist. And we’re off!

A teacher — Eve — is getting chewed out by the principal for teaching sex ed to her students or something. She’s placed on leave. Her husband tells her everything will be ok and he’ll pick up another job if he needs to. They also have a teenage daughter, by the way. They all go to a football game where some mean moms stare Eve down for teaching their kids sex ed.

In maybe the most abrupt segue I’ve ever seen on a TV show, we cut to a woman being beaten in a barn. She gets the upper hand on the guy assaulting her and stabs him in the gut with a pitchfork after punching his throat. What on earth is going on. We were just watching some kids play football like three seconds ago.

Brian is now running away from the Mist through the forest. The Mist is approaching town. Uh oh! Suddenly we’re back at the football game and the star quarterback — who Eve’s teenage daughter clearly has a thing for — wants her to come out partying with them. Eve says no. Her husband — whose name I still haven’t caught yet — is all like “aw mom, c’mon. Just be cool for once.” So they bicker about parenting for a bit. Her dad goes on to literally tell his kid to just sneak out and go to the party anyway. Cool dad!

Alex shows up at the party with her hip friend Adrian and of course the jocks immediately begin hurling homophobic slurs at him. Luckily the cool quarterback Jay isn’t a dick and he sticks up for him. Jay, cool guy that he is, then slyly pressures Alex into drinking which she PROMISED her dad she wouldn’t do.

Brian storms into the police station and tells the cops that there’s something in the Mist. He repeats this several times. The cops don’t listen OF COURSE and when he makes a play for some guns (a big no-no in a police station) he gets thrown in a jail cell. He’s panicking now. The cops will regret not listening to him, I bet.

Meanwhile the woman who killed the dude with a pitchfork (holy shit, remember that?!) shows up at a stranger’s house looking for an old woman who doesn’t live there anymore. Probably her mom. She died a couple months ago.

Eve and Kevin awake to find Alex missing. When Alex does get home she’s in bad shape. She confesses she went to a party where she got very drunk and it’s clear her memory’s a little foggy. Eve tells her parents she was raped, and that while she doesn’t remember it, Adrian told her it was Jay. Eve is understandably very pissed at Kevin for going behind her back and letting Eve go to the party.

The police grill Brian about his behavior but Brian doesn’t remember much about himself. Kevin and Alex arrive at the police station to report Alex’s rape. The cops go and retrieve Jay from school and bring him in for questioning. The doctor tells Kevin that there is evidence of intercourse but not violence necessarily. There is DNA to implicate Jay if it was him. Back home Adrian tries awkwardly to comfort Alex while some truly terrible football players paint “WHORE” on their driveway and put a brick through their kitchen window.

Pitchfork woman tries to take a duffel bag full of cash and passports from the shed behind the house she broke into but the stranger once again busts her. This is the least interesting storyline on the series so far.

Natalie does some research at the library and finds old accounts of animals behaving strangely around town and turning black — as if nature had turned sour. We’ve already established that Natalie cares a lot about the environment, so something’s cooking here. Back at the police station, Adrian is brought in for questioning when there’s a car crash outside. The cops and Kevin go outside to find a not at all foreboding mountain of Mist approaching the town. Uh. Oh!

Eve has decided to get Alex out of town to protect her. Which makes sense. Kevin has not been invited. Alex tells Eve that everyone in town knows Eve used to be a “slut” so Eve hauls off and smacks her. They eventually arrive at the Bridgeville Mall to pick up some valium. Alex decides to wait in the car while Eve goes in. Methinks we’re going to be spending a good chunk of time in this mall.

The Mist rolls over the police station so Kevin and one cop go back inside. The other cop decides to hang around and take a bunch of selfies with the Mist for his wife. This is such a comically bad idea it’s almost hard to feel bad for what’s about to happen to him. He’s attacked by cockroaches that slowly overwhelm him. Kevin and the other cop hear his screams and leave the station to help him. The other cop finds him on the ground and whatever he sees there scares the shit out of him enough that he just wants to leave his colleague and get the hell out of there right away. Kevin goes inside to get Adrian.

Natalie and her husband leave the library and walk directly into the Mist. They’re immediately disoriented, as though they’re in a forest that wasn’t there just seconds ago. Before they can make it back inside the library they’re approached by a gun-wielding stranger who’s clearly Seen Some Shit in the Mist. He asks if they’re real and they assure him he is. He then shoots and kills himself but not before shooting and killing Natalie’s husband. Natalie is then clearly distraught and disoriented, stumbling alone through the Mist. She makes it inside a church.

Before Kevin and Adrian can split, Brian and Pitchfork Woman beg Kevin to free them from their respective jail cells. Kevin relents and lets them out, as asked. The other cop gets spooked and takes off. Back at the mall, Eve picks up the prescription in the pharmacy (but not without being harassed by an awful mom). The power goes out. Alex is freaked and runs to the mall from the parking lot. She finds a body, which freaks her out more. She finds Eve and they make it back inside the mall together where they’re once again harassed by Awful Mom. Alex pleads with her not to go outside but Awful Mom and her son say some awful things to her and go outside anyway. After some suspenseful beats Awful Mom is hurled against the door, missing her lower jaw. She’s then yanked away into the Mist by something unseen.

So now everybody in the mall is freaked out and without any phone signals. In the final shot, Alex looks up to see Jay is locked in the mall with her. 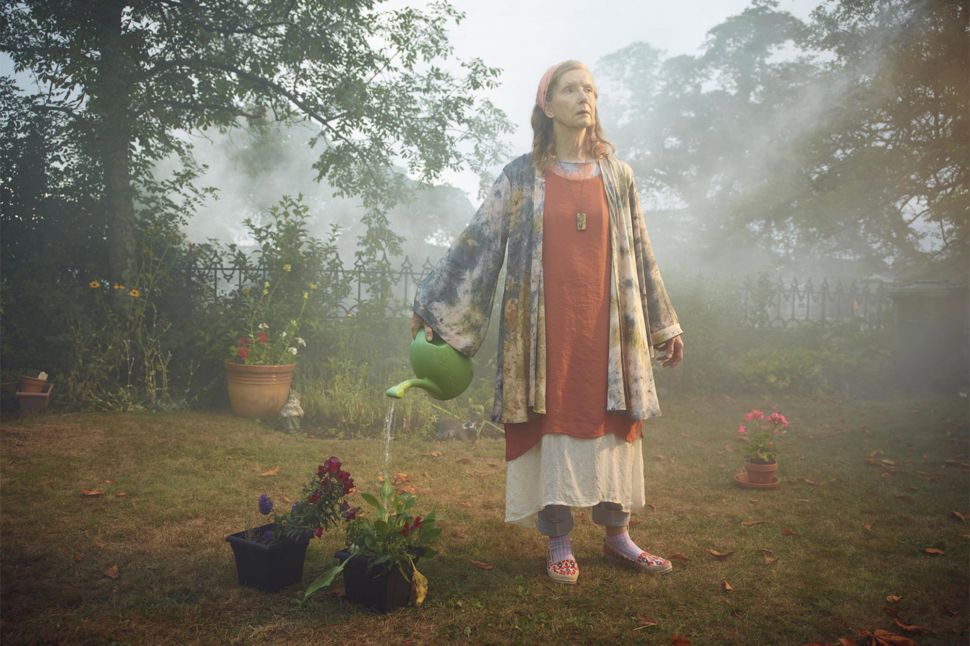