It happened. It actually happened: the most hated housewife in the world, Jill Zarin, has finally returned to our television screen. Why is she so hated? Well, it’s a long story, one that involves underhanded scheming, back-door deals and a lot of Skweez Couture and Zarin Fabrics. But, at one point, she was so hated, she inspired the creation of a popular blog called, I Hate Jill Zarin; a site which I found by simply googling those words after she did something particularly awful.

But it’s been so many years that I hardly remember what it was that she did that made me so angry. And besides, a lot has happened since then: every year, some housewife in some city finds a way to top the bad behavior in another city. There’s Teresa’s table-flip in New Jersey, Vicki lying about cancer over in the OC, and, recently, Phaedra in Atlanta’s slanderous accusations that caused her to get kicked off the show –– much like Jill before her.

And Jill has been trying, for years, to wheedle her way back onto this show. There was that awkward Watch What Happens Live episode where Jill practically begged for her job back; the various appearances on low-rent reality shows; the unabashed desperation in her interviews with the press. But to no avail –– Bravo and the production crew was so done with her, that she was not even allowed to appear on our screens, despite her friendship with Luann and, apparently, Dorinda; the two of whom she meets for dinner to discuss Luann’s forthcoming wedding and the requisite gossip of the day.

And Jill openly admits that she misses it. Not the gossip, as she claims. It’s not as if she couldn’t meet up with Luann or Dorinda to discuss the drama off-camera. What Jill misses is the calculated, made-for-television drama; the opportunity to destroy others and tear apart their lives for the entertainment of millions. It was her show, a show that had her at the center, who brought on people and took them off at will. She created the drama, manipulated the cast and crew. She had reached the pinnacle of her ambition, until one of her schemes went horribly wrong: she went after Bethenny, a fan-favorite.

It’s a mistake that Jill regrets to this day. She knows that Bethenny is one of the reasons she will never be allowed back on the show. And so she asks Luann if Bethenny is coming to the wedding. And when Luann responds in the negative, Jill is disappointed. She still holds hope that they can somehow reconcile, on camera of course. She knows it would make good content, that the fans would eat it up. And she knows that she cannot just arrange to meet Bethenny – it would have to happen during an event that they both attend. But she still doesn’t understand that fake apologies for the sake of a storyline doesn’t fly with Bethenny. She doesn’t understand that her actions were unforgivable.

And neither does Ramona. Earlier in the episode, Ramona and Bethenny got together in one of Dorinda’s Berkshires sitting rooms to talk. As they sat down on the aged couch, against the backdrop of the Christmas tree, its artificial lights casting a colorful yet ominous glow, Bethenny called Ramona a bad friend.

Calling Ramona a bad friend is a trigger; it’s the one thing Ramona prides about herself. Except that Ramona is selectively a good friend, the kind of friend who it’s impossible to have more than a superficial relationship with because their narcissism prevents you from sharing your deepest, most vulnerable self.

But Ramona turned savage. She sounded like a rabid dog as she began to peel back the layers, revealing why she’s truly upset with Bethenny: she is jealous of Bethenny’s success. But she couches it in the context of Bethenny’s “sex tape.” Ramona, the resident prude, has always been a bit uptight about the other Housewives’ sexual deviancies (even as she acted like a bit of a harlot herself). And when the video came out, it reminded Ramona about the unfairness of it all: why should Bethenny be so successful when her success is based off of some glorified sex tape? Bethenny didn’t work as hard as her, didn’t pave the road of her success by the skin of her teeth. She merely slept her way to the top.

Unfortunately for Ramona, none of that is true. Bethenny is beloved because of her natural scrappy personality. She literally started as a nobody on this show and managed to achieve success that no housewife since has managed to replicate.

The “sex tape” came out in the summer, when they weren’t being filmed. So Ramona waited until they all got together on camera for the first time, just to have a storyline. And when that backfired, Ramona was pissed off that Bethenny refused to get over it.

Bethenny has some gripes of her own. When Ramona brought up the tape, it just reminded her of all the times that Ramona was a crappy friend to her: that time she badgered her on the Brooklyn Bridge that she would end up alone, that time she stole Bethenny’s dresses and never returned them. It didn’t matter that Ramona helped her through her medical issues; the totality of Ramona’s awfulness superseded Ramona’s do-goodery.

And now that Bethenny has revealed Ramona’s hidden jealousy, Ramona wants to go straight for the jugular, straight to where it hurts. But Bethenny is cool as a cucumber.

So when Ramona tries to claim that Bethenny had some privileged life, it fails spectacularly, Bethenny merely laughs at the insanity of such a notion. So Ramona switches gears. And she cries about her own life, how devastating it was to have her husband of 25 years cheat on her. Again, no reaction. So Ramona keeps biting, telling Bethenny that everyone knows what an awful person she is. But Bethenny then asks the obvious: then why are you trying so hard to apologize to me? The question makes crazy-eyed Ramona’s brain jolt into overdrive, sending out sparks as it shorted out, her crazy-eyes rolling intensely, bulging ever-closer into anime-territory.

Because, the truth is, Ramona knows that to be on this show, Bethenny is the one you have to have interactions with. As a result, having conflict with Bethenny is a calculated risk, one that guarantees air time, but risks ultimate ostracization. Or worse, getting kicked off this show.

And that pisses Ramona off. Ramona is sick and tired of trying to kiss up to Bethenny, of having to please her in order to maintain her status as a Housewife. Ramona, the only Housewife on this show who has remained since the beginning, believes that she is the indisputable queen. And then Bethenny shows up and wrecks it all; becoming the center of the Real Housewife of New York City universe that was previously occupied by Ramona. But Ramona couldn’t admit that on-camera. Instead, she flailed her arms, called Bethenny a bitch and stalked out of the room.

In response, Bethenny left. Bethenny understandably doesn’t want to see Ramona again. But Ramona doesn’t understand. She thinks she can wipe the slate clean constantly; that apologizing without admitting fault, without sincere efforts to make up for what she’s done, would somehow work.

The next morning, Ramona claimed she didn’t remember what happened. And her amnesia is part of the problem: she always tries to backtrack, getting allies on her side by showing how Bethenny wronged them. It’s a way for her to rid herself of her own wrongdoing, to wipe her hands clean of her transgressions.

Bethenny, for her part, is done with the Bezerkshires. But it’s ok, because Dorinda will likely not be having anyone back over, ever.

Apparently, Ramona tore off the light fixtures from the wall in her room. And it left Dorinda devastated because of what the home means to her. For all it’s tacky monstrosity, Dorinda’s Berkshires manor is a part of her legacy, it’s a piece that connects her to her dead husband, it’s her home. And Ramona, with her bed unmade and refuse strewn across the floor, trashed the room like she’s some coke-addled rockstar, circa 1985.

Later, at Carole’s art gallery party, Dorinda confronted Ramona about it. And even though the incident depressed Dorinda, even though Dorinda told Ramona that she would have to fix it, Ramona barely acknowledged the wrong-doing and how it hurt Dorinda. Instead she launched into an anti-Bethenny diatribe. Because she’s a self-involved narcissist.

The next day, Luann and Tom set off for their wedding extravaganza down in Palm Beach. I still contend that Luann and Tom are incredibly awkward together. They don’t act like people in love, but people who don’t feel comfortable with one another. Even in the car on the way to the helicopter, their body language felt off: he faced away from her as she was leaning in, her body contorted into a simpering mass. Their interactions seemed forced, her smile was strained (especially when he mentioned partying the night before their wedding). But, at this point, nothing will stop this train from reaching its destination. This wedding is happening, and none of the rumors will stop this couple from alighting onto that helicopter and flying off into the sunset. 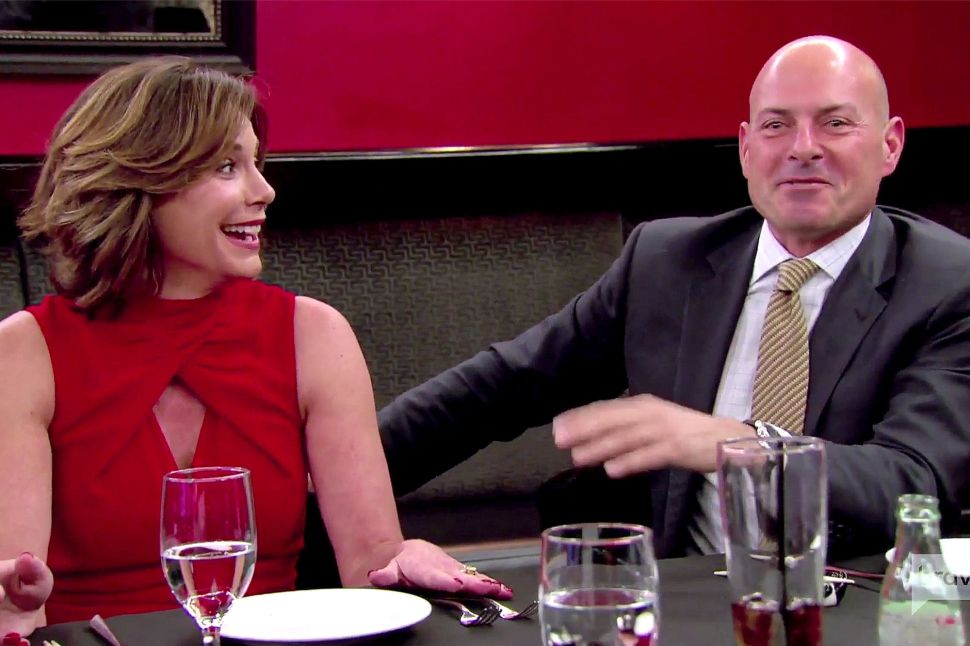