It’s finally here: Luann’s wedding has officially happened and I was so wrong about everything. I mistakenly thought that Luann’s identity was too entrenched in her Countess title, that she would never remarry because she would lose it. But I miscalculated the strong pull other elements of high society would have on her: the irresistibility of marrying the ultimate bachelor and most desirable man in town, the irresistibility of having access to powerful friends, the irresistibility of leading a high-society life with the kind of people who go to Palm Beach. Taking all that into account, I guess it’s no surprise that she married Tom, despite all his (many) indiscretions.

Listen, I am happy for her. I really am. She got what she wanted: she got her fairy tale, as superficial as that fairy tale may be. Against all odds (and everyone’s better judgement), she persisted, walking down the aisle like she was accepting the fair maiden after winning the jousting competition. And she looked beautiful; radiant even. But beneath that thin veneer of wedded bliss, there were insidious hints that all was not as it seemed. As Luann walked down the aisle, she barely looked at the man she was coming toward, instead she kept her focus on the sea of guests, winking and smiling as she stepped toward the altar. During the ceremony, as Luann smiled broadly, Tom looked a little checked out, shifting his weight around like he’d rather be anywhere but there.

It’s those little things that make you realize that this wedding is not quite a sham, but it’s still little more than performance art. Their “love” is uniquely defiant, an elaborate middle finger to their “haters.” And to make it to the altar was her way of proving that this was somehow real, that this is what she really wants. And, in a sense, it is real to her. To marry Tom is to give up a big piece of her identity: her title as Countess. But she’s also trading one “fabulous” life for another: from living in a townhouse to living in a penthouse, from vacationing in the Hamptons to vacationing in Palm Beach. She’s undertaking a new role in the social circuit as Mrs. D’Agastino, but the key here is that she’s still in the world of high society. For Luann, that’s all she wants. So her marriage to Tom is a “score” as she said so inelegantly at her “after-wedding” party.

That “after-wedding” party was so strange. And for a Housewife party, it was also kind of pathetic. Let’s start with the fact that Luann invited all the Housewives who weren’t invited to the wedding (along with some actual wedding guests) to this affair.

Dorinda thought this is just a way for Luann to extend her wedding as long as possible –– like those annoying people who have birthday months and demand to be given presents every day and to go out and party every night.

She’s wrong. The “aftermath party,” wasn’t a celebration of Luann’s wedding –– it’s her way of giving the big ol’ middle (well, ring) finger to all the women who wronged her, to flash her newly acquired ring in everyone’s faces, to prove that she actually made it. It’s at best a pity party, at worst a way to lord over the women as they’re forced to “ooh” and “ahh” over her happiness.

And her contempt for the other Housewives who wronged her was apparent in the party itself. When Bethenny arrived 15 minutes late, no one was there. In fact, the room was strangely empty: the barren walls were conspicuous for their lack of adornment; there were only two tables in the room, and they were bare of food or even decoration. It was as if Bethenny arrived before the party had even been set up. The venue was, to quote Ramona, “drab and dreary.” It just seemed like one of those sad mini-conference rooms in some Holiday Inn that are used for awkward meet-and-greets.

The worst part of the party? There was no food to be found. Guests had to satisfy themselves with a single glass of wine served on a platter by the sad-looking waiter.

Finally the bride and groom arrive. And the bride, predictably, peacocked about, looking smug as she showed off her new husband. Luann and Tom’s interactions continued to seem strained. At one point, while talking to Sonja and her Frenchie, he grabbed Luann’s neck to kiss her. In what was supposed to look like a moment of delirious love and passion, came off as a moment of violence and agitation. But maybe I’m reading too deeply into that one, and it’s just a small indication of the kinky stuff they get up to in their bedroom (which would hardly surprise me).

Speaking of Sonja and her “Frenchie,” earlier in the episode, we finally got to meet Edgar (Frenchie’s real name). He was in Sonja’s kitchen, making Luann’s favorite eggs a la francaise. Which is beautiful and romantic, but the problem is that Frenchie is Sonja’s side-piece. Sonja has already ordained Rocco, her other paramour, as husband material. And now her arrangement has begun to spin out of control.

It started with Frenchie staying for breakfast. Then, when Sonja came back from Phuket over New Years, he started moving in; a bag here, a suit jacket there. He even redecorated a bit (much to Tinsley’s chagrin who was living in stuffed animal purgatory).

Part of why Sonja didn’t want to have a relationship with Frenchie was due to his relative youth. Sonja no longer can, nor wants, to have kids, which makes Rocco the more appropriate choice. But then Frenchie suggested adoption. And that’s when she realized she was in too deep. The relationship was moving too fast, but she had no power to stop it. Even her simultaneous relationship with Rocco that Frenchie knew about wasn’t enough to deter him.

Later, Bethenny hosted a “glamorous” holiday party, replete with a branded Skinny Girl luge and seafood. Bethenny likes the word luge, likes how sexual it sounds, and continued to say it every chance she got throughout the party. She was oddly buoyant, but that’s probably because she didn’t have to contend with Ramona, who was not invited.

Instead, Ramona went out with Avery and five of Avery’s closest friends. Which is especially sad when you realize that Ramona’s own annual holiday party, which used to be prominently aired every year (even once being the party that ended the season a few years back), was relegated to flashbacks.

It’s a visual reminder that there’s a definite hierarchy inherent to this show. The producers continually show deference to Bethenny, often airing boring scenes like a visit to Chinatown simply because Bethenny makes an appearance. Bethenny is the person you need to come to your party to guarantee it will avoid the cutting room floor, and that’s part of why Ramona was so pissed off with her. Ramona was resentful of the required kissing-up to Bethenny and hated her for it. And now, Because of her fight with Bethenny, Bethenny refused to attend Ramona’s party. Which, in turn, made it not “television worthy.”

The only footage we get were two flashbacks:  a brief clip of Ramona finding out from Tinsley that she wasn’t invited to Bethenny’s party, and a clip of Dorinda yelling at Ramona for what she did to Dorinda’s house, while Ramona simply giggle.

And as Bethenny and the rest of the Housewives (minus Luann and Ramona) discussed Ramona’s bad behavior at the Bezerkshires, Ramona told her trusty cohort of Singer acolytes about how she tore off the wall fixtures, getting the appreciative laugh in response.

Seeing Ramona being forced to have the classic reality television “hash-out” conversation with a gaggle of 22-year-old girls is kind of sad. She really believes that these girls are her friends – not people who are keen on mooching off her dime to get free dinner and drinks. It speaks to Ramona’s desperation: she wants to be and feel young. Surrounding herself with this group of girls validates her existence: they look up to her because she provides them alcohol and “worldly” advice. She’s the “cool” mom, the kind of mom iconically played by the fake boobs and Juicy sweatsuit-clad Amy Poehler in “Mean Girls.”

And they return Ramona’s affection with some youthful advice of their own; the kind of advice removed of context and nuance. Morgan, one of Avery’s friends, told Ramona that she shouldn’t have to walk on eggshells around someone you call a friend, because then they’re not your friend. Which is true: Bethenny is not Ramona’s friend. But to Ramona, this advice simply validates that Bethenny was in the wrong. It absolves Ramona of any wrongdoing, that Ramona was merely lashing out because she got sick and tired of walking on eggshells.

But it’s a temporary form of validation. Because it may make her feel better, it may even help her justify her behavior, but it doesn’t fix the relationship with Bethenny that Ramona desperately needs to get fixed in order to keep her place on this show. Because it’s not looking good: she didn’t get invited to Bethenny’s holiday party, and Bethenny continued to give Ramona the cold shoulder at Luann’s after-wedding party. Ramona needs to find a way to fix this, fast, before the season ends. Before it’s too late. 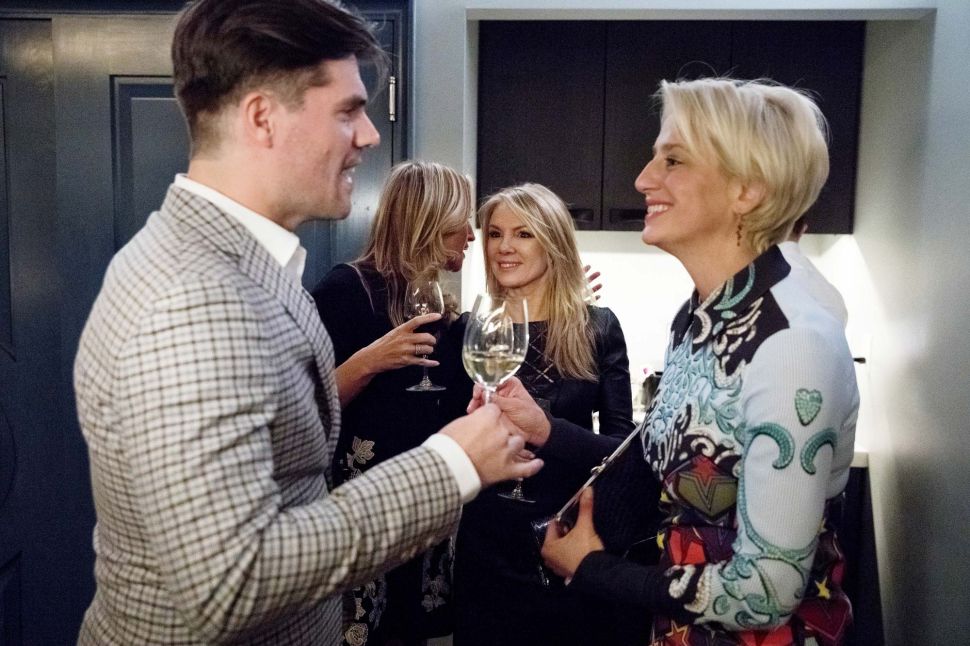