What do you do when the women you are forced to hang out with stuck-up believe that New York City only consists of the Island of Manhattan? Take them to the Bronx, of course!

And so Bethenny decided to take the “girls” to Bronx’s Little Italy for good, old-school Italian fare. Dorinda feels at home, Tinsley feels out-of-place and sticks out like a sore thumb in a cocktail dress, Sonja is all about the salami and Luann is surprised to find a Little Italy in the Bronx.

And then Carole walked in looking like she worked at the Bronx zoo as a zookeeper. But that’s ok, because these women quickly start devolving into wild beasts. Specifically, Dorinda and Sonja.

After inviting the girls to go to Vermont, Dorinda and Luann insist on bringing the two-headed, crazy-eyed dragon that is Ramona Singer. Which was a convenient segue into Bethenny recapping the whole torrid affair (hot take: it was a doozy).

And then, as if a producer flicked some switch, the lunch played out as if it were out of a movie. “I think Ramona was drunk,” Dorinda said, half-slurring, as she poured herself another glass of red wine. And so Bethenny listed Ramona’s past misdeeds, showing how she wronged them all, including Sonja with Tipsy Girl.

The moment I heard Tipsy Girl, I inwardly groaned. Seriously? This again?

And Sonja, the queen of holding onto the past like it’s a precious diamond, immediately latched onto the conversation.

And we get a nugget of gossip in the process. Apparently, the Tipsy Girl scandal was much broader than it was initially made out to be. Even though Sonja was on the receiving end of the fallout and subsequent ostracization from the group, both Ramona and Dorinda were apparently interested in doing Tipsy Girl.

But hangover Dorinda had turned into drunk Dorinda and drunk Dorinda wasn’t having any of it. She swore she wasn’t involved, and demanded to see the receipts. Unsurprisingly, the claim that Dorinda wanted to do Tipsy Girl came from Slimy Johnny texting Sonja’s former business partner (who was also a sleaze). And as Sonja reached for her phone for proof, Dorinda lashed out.

Maybe she was nervous to have Sonja reveal the truth because she didn’t want to be on Bethenny’s bad side. Maybe she was just so drunk that she lost control of her faculties and became incensed.

Either way, we have returned to the Dorinda a few episodes back who yells and screams, and rants and raves. and stomps her feet and points her fingers like she’s stabbing her enemy (in this case, Sonja).

And even though Carole secretly loves this side of Dorinda, it’s a side of her that’s also disturbing. It puts Bethenny’s comments last season about possible substance abuse by Dorinda and Slimy Johnny into perspective. It’s entirely possible that Dorinda’s and Slimy Johnny’s relationship consists of rampant drug use and late-night drunken raves. It would be consistent with Dorinda’s emotional baggage of being a widow.

But it’s also possible that Dorinda is just a bad drunk, that she doesn’t hold her alcohol well (which, again, would be consistent with her emotional baggage of having lost her late husband). And if that’s the case, she should avoid alcohol entirely. She may not be an alcoholic, but she certainly has issues with alcohol that are not being addressed.

I mean, even later, when they all head up to Vermont, Dorinda just seemed…off. Her eyes looked glassy, her face a little wan. She forgot her luggage, but brought a disco ball. She just doesn’t seem well, like there’s some sort of deeper issue at play here.

And for some reason, this group, who are normally quick to call each other out for bad drinking (as they did with Sonja back when she was a floozy boozy lady about town), refrained from saying anything. Even as she gulped down another glass at the restaurant mid-fight with Sonja, even as she got increasingly erratic at the lunch table, the women didn’t seem to find a problem with it. Especially Carole, who was thoroughly enjoying the blow-out scene.

And nothing was about to stop Dorinda from lashing out. Even though the restaurant was packed with ordinary people grabbing lunch as ordinary people do, Dorinda seemed unaware of her surroundings. It’s as if she acquired tunnel vision and believed she was sitting in an empty Upper East Side restaurant with only her colleagues and production surrounding her.

And so when Dorinda stood up, yelled at Sonja, the entire restaurant watched as if they were a group of amateur actors performing an impromptu skit; a sideshow to watch as they slurp up their bolognese. Some laughed, some knit their brows in confusion. But it provided a rare glimpse into how removed the Housewives world is from normal life.

And so the Housewives filming in this restaurant with all these people highlighted the artificiality of it all. These women (barring a few) would never hang out with each other unless production forced them to.

And why would they want to? Sonja lives in the past, still resentful over how Luann and Dorinda treated her. Dorinda is a bad drunk. Bethenny is unforgiving and intractable. Luann is living in her delusions of grandeur, adjusted for commoner status (she is, after all, a Mrs. now). Ramona is a crazy-eyed schemer. Carole is the only one who seems to be a relatively normal, cool chick.

Each Housewife is, in her own way, self-serving. Luann, newly crowned Mrs. D’Agastino and overly proud of her marital status, believed she deserved the best room in the Vermont log cabin. Without even the slightest bit of embarrassment, Luann expressed her disappointment for not being offered the best room in the house as some sort of extended wedding present. This is, again, Luann’s delusion at play here. Because why would this group of women who you refused to invite to your wedding, care about giving you special privileges? It takes a certain kind of chutzpah to expect people to slave over you and be happy for you when you purposely prevent them from sharing in your happiness.

Just take Ramona and Sonja. They ran around the house like children to search for the perfect room. When they realized it was taken by Dorinda, they kvetched and whined and even suggested that Dorinda shouldn’t have been so selfish since she knew that all Ramona and Sonja do on every vacation is cuddle and take long bubble baths together, and how on earth could they do that in the room with the tiny twin bed??

And so it’s no wonder that these women treat each other like they are infantile creatures who don’t deserve respect; nearly all of them act like little children who need a time-out and a good spanking.

Dorinda treats Sonja like a child, and yells and scolds her when Sonja says things she doesn’t like. But then Sonja treats Tinsley like a child, forcing Tinsley to stay in Sonja’s child’s bedroom and establishing claustrophobic rules.

And it’s true, if Tinsley doesn’t like the way she’s being treated, she should just get over herself and leave. It’s the sensible thing to do. But Tinsley, as we saw in her therapist’s office, searches for abusive relationships. She craves the volatility, enjoys the dramatics of it all. She may hate it, she may cry and break down over her woes. But, at the end of the day, she puts herself in that situation. And, at the end of the day, she has both the means (just last week she was looking at expensive apartments) and opportunity to go off on her own.

Instead, Tinsley looked tone-deaf as she broke down at the wooden table of the log cabin. She lashed out at the group, saying they haven’t gone through what she went through, they don’t understand pain like she understands pain. The group looked at her incredulously, staring at her like she was insane. “Um, I had a very public, nasty divorce,” said Bethenny. “Me too,” piped in Luann. One by one, they tore Tinsley apart for being so myopic, so narrow-minded about her own pain.

But it would be hypocritical to single Tinsley out. Because all these women (yes, even Carole) are self-centered assholes. They don’t care about each other’s pain. They only care about one another in relation to how it benefits themselves. Cynical? Sure. But don’t feel bad for them. They are all seasoned reality vets at this point (including Tinsley by the way). They know the game, they know how to play with televised group dynamics. And they really need to get the eff over themselves. 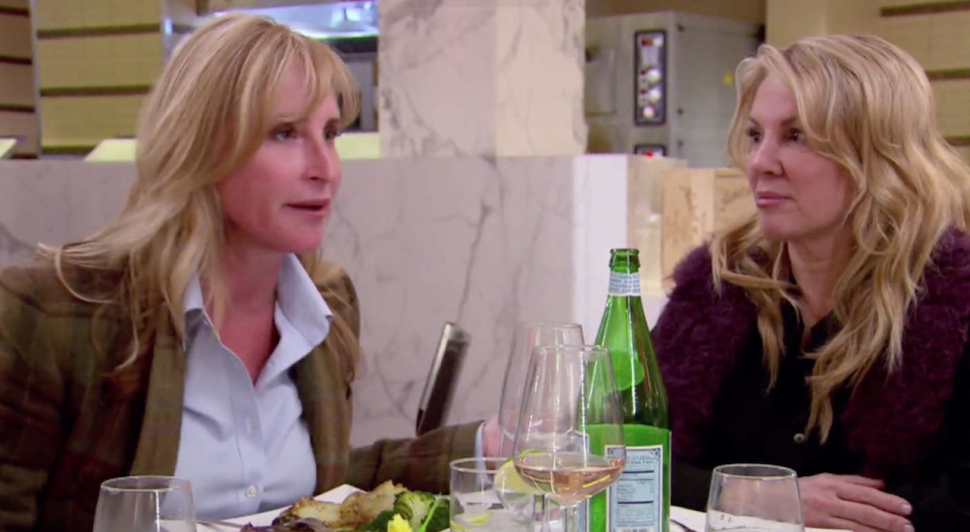