In January 1993, I attended a birthday party of mostly older adults. I was barely in my 20s and felt uncomfortable. I went in the basement watched The Simpsons with two middle-school aged kids. We said nothing to each other the whole night, but we bonded over our love for Fox’s hottest show.

The episode was titled “Selma’s Choice.” It was about the kids’ trip with their aunt Selma to the hottest new theme park, Duff Gardens, named after Homer’s favorite beer. After the scene where they attend Aunt Gladys’ funeral and Bart freaked Lisa out by pretending to speak as the “dead Gladys” behind her coffin, we laughed uncontrollably. Many of the other people who heard us laugh came down to see what the ruckus was about.

Soon, we had almost 15 adults come join us and laugh hysterically at scenes that showed the heinous Aunt Selma try and control Bart and Lisa at Duff Gardens. The scenes where Bart Simpson tried on “beer goggles” and the gang went on the “It’s a Small World” Disneyland-like ride where the kids get drunk earned the most laughs. Both kids and adults genuinely bonded over and enjoying a cartoon—surely not the norm in the early 1990s.

The Simpsons was groundbreaking in that it introduced animated television as something other than cutesy kid’s stuff. The show originated as short one-minute clips played during The Tracey Ullman show in 1987. The very first episode of The Simpsons, which was a Christmas special, debuted on December 17, 1989. The show instantly rose to A-list status in 1990 and remained relevant for years to come.

The Simpsons’ characters, who are flawed but likeable, are more important than the plot. Bart Simpson is the mischievous 10-year-old boy that is lovable and rebellious. Homer Simpson is the overweight, lazy father who doesn’t have a lot of common sense, allowing his son to outsmart him. However, the audience loves Homer because he is also caring and tries to be a good husband to his wife, Marge. Then, there is the heavy drunk friend Barney, the crazy Tavern owner Moe, and other men that make us laugh because they remind us of our own flaws.

Creator Matt Groening has been a lot nicer to the women—at least when it comes to the main characters. Marge Simpson, the wife and mother, is the perfect feminist role model in that she’s a good wife but is also the decision-maker of the family in many instances. Lisa Simpson is the 8-year-old child prodigy of the family who outsmarts and outwits everyone. Maggie is the pacifier-blowing baby who is detached from the family but not as much as she leads you to believe.

The fact that all these characters never age or change was part of the show’s appeal in the 1990s. After all, why should Cartoonland be the same as real life? However, as the show lasted beyond the millennium, the concept of the never-aging or changing characters didn’t age well. Homer’s obsession with donuts is no longer funny—it’s annoying. Bart’s continued rebelliousness makes one cringe now rather than laugh. And we get it: Lisa is a brain. But even her attempts to outsmart everybody feel somewhat unwise these days.

It doesn’t help that some of the show’s best characters are no longer on the show, with the best being Bart’s teacher, Ms. Krabappel, who reminds us all of our grade school teacher who we assumed had no life outside of teaching. And what about everybody’s favorite incompetent lawyer, Lionel Hutz, who has been missing since 1998? Then, there is everybody’s favorite has-been actor Troy McClure, who went from the big screen to selling ridiculous products in infomercials. While it’s true that the actors who played these characters (Marcia Wallace and Phil Hartman) have passed away, other voice actors could have helped these characters live on.

Characters and plotlines aside, The Simpsons’ success has hurt it in the long run. The show was such a pop culture phenomenon that it spawned other animated shows in the late 1990s such as South Park and Family Guy—shows that weren’t afraid to take the risks The Simpsons wouldn’t take. Matt Groening wanted his show to appeal to adults and children, making sure (or at least thinking that) only adults would understand most of the adult-oriented jokes. South Park could take the risks since the show debuted on Comedy Central. Family Guy, which has been accused of being as outdated as The Simpsons is these days, hit its prime in the late 2000s, when gross humor became more acceptable.

The Simpsons keeps trying to make us laugh with Itchy tearing Scratchy’s eyeballs out, Grandpa getting so old that he pees on the floor, and Bart telling others to “Eat his shorts, man!” But we’re not laughing; instead, we’re wishing Fox would put The Simpsons out of its misery. If The Simpsons doesn’t die soon, whatever’s left of the show’s legacy will. 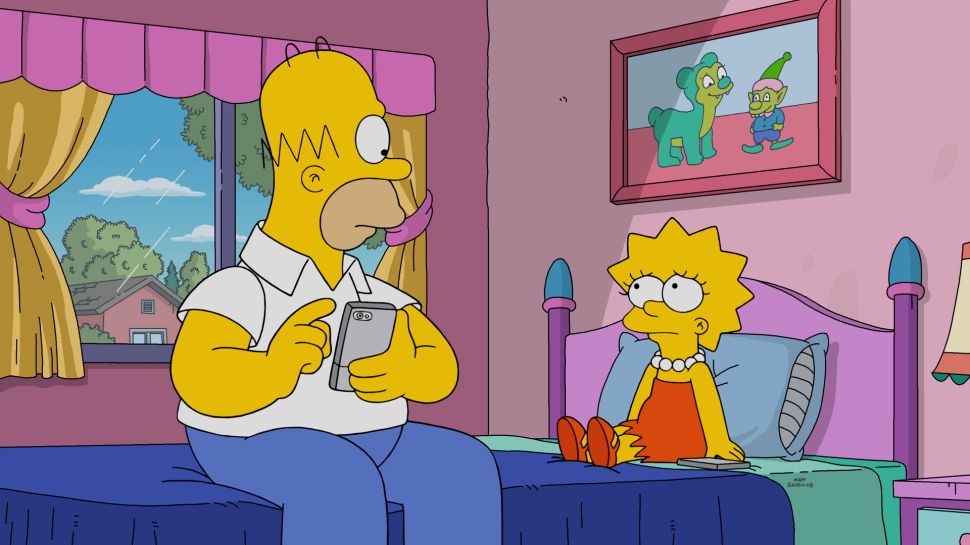