On June 23, National Nurses United Director and Bernie Sanders surrogate Roseann Demoro tweeted, “Dems call on Tom Perez to resign as Party continues to push corporate candidates, ignore members.” Calls for DNC Chair Tom Perez to resign have come as direct result from reports that May 2017 was the worst fundraising month for the Democratic National Committee since 2003. The Republican National Committee raised more than two times the amount of money raised by the DNC in the same period. April was almost as bad for Democrats as May; they raised just $4.9 million, the worst performance since 2009. Perez excused April’s poor performance with his recent assumption of the DNC chairmanship, but his inability to inspire support is setting off alarms among party leadership.

Perez’s role as DNC chair started as a slight toward progressives who wanted Bernie Sanders-backed Congressman Keith Ellison in the role. But the Democratic Party establishment prevented this from happening at its own peril.

In the July 2017 issue of Harper’s Magazine, Andrew Cockburn revealed how Barack Obama and the Democratic establishment orchestrated Tom Perez’s candidacy and Ellison’s defeat in the February 2017 DNC chair race. Their reasoning for these tactics was to prevent the progressive wing of the party from gaining power.

“The former labor secretary, an ardent supporter of Obama’s Trans-Pacific Partnership corporate giveaway, had been personally recruited by the president to run for the DNC chairmanship and ward off an Ellison victory,” wrote Cockburn. “Former members of the Obama administration had confirmed that the president hoped to block an Ellison victory. ‘He wanted to stop the Sanders wing of the party from taking over,’ one such official told me. That was certainly the view of Jeff Weaver, the Vermont senator’s former campaign manager. ‘The sole reason Perez is running is to stop Ellison,’ he told me angrily. ‘He has no platform of his own.”

The Democratic establishment didn’t just run Perez; they bullied DNC delegates into voting for him. This tactic was reminiscent of the 2016 Democratic primaries, during which party leaders shunned and vilified Democrats who did not line up behind Hillary Clinton.

‘”I saw it,” Jane Kleeb, Nebraska Democratic Party chair, told Harper’s Magazine. She said she heard that the Iowa delegation was strong armed into voting for Perez after Democratic officials threatened the state losing its highly coveted position as the first state to vote in the Democratic presidential primaries. After Perez won the election, he tried to appeal to progressives by giving Ellison a ceremonial position as DNC deputy chair and running a marketing campaign of unity.

Kleeb went on to describe how the DNC has abandoned states like hers, writing them off to the Republican Party. She says a boost in support would make red states more competitive. Instead, Democratic leadership has doubled down on the strategies that led to Hillary Clinton’s devastating loss. The party pours funds and resources into establishment-backed lost causes, like David Brock led organizations. Additionally, instead of inspiring progressives to get them to the polls, they resist their energy in order to keep the party’s hierarchy intact.

Perez’s position as DNC chair is a constant reminder that the Democratic establishment cares most about courting donors and maintaining the status quo. Throughout his “Unity Tour” with Sen. Bernie Sanders, Perez received boos. He was also booed at the California Democratic Convention in May 2017. His leadership generates little to no enthusiasm, and the millions of people who fueled Sanders’ grassroots fundraising machine during the 2016 Democratic primaries will never donate to the DNC while the establishment retains their hold over the chairmanship. Perez extends the legacy of former DNC Chair Debbie Wasserman Schultz and former DNC Interim Chair Donna Brazile, both of whom were caught cheating to advance Hillary Clinton’s candidacy during the primaries. Democratic leadership needs to offer concessions—or at least fair elections—to progressives if that they intend to survive into the 2018 midterms. 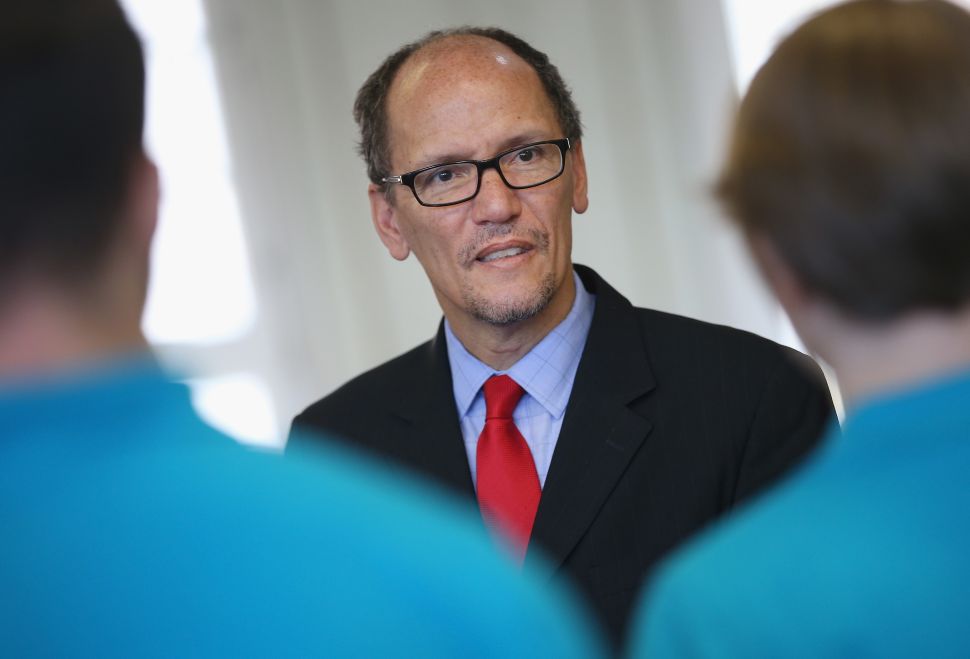