The picture of comedian Kathy Griffin holding a bloody head that resembled President Trump’s was certainly offensive, but it was not illegal. To make charges, prosecutors would have to show that Griffin intended to harm the president, not simply make a crude political statement.

Griffin has since apologized for the controversial photo, acknowledging that it crossed the line. However, the apology hasn’t quieted the call for the comedian to face charges over the stunt. The Secret Service has also acknowledged that it is investigating the incident.

Offensive speech under the First Amendment

The primary job of the First Amendment is to protect speech that many may find offensive and therefore seek to suppress. For instance, in 2011, the U.S. Supreme Court upheld the right of the Westboro Baptist Church to protest a military funeral with homophobic signs.

Like all constitutional protections, free speech does have its limits. Categories of speech that are traditionally not afforded protection include “fighting words” intended to incite unlawful activity, obscenity, child pornography and defamatory speech.

In a 1992 decision, R.A.V. v. City of St. Paul, the Supreme Court addressed hate speech. In response to a cross-burning in the front yard of a black family, the perpetrators were charged under a St. Paul, Minn., ordinance that criminalized racist expressions. The Supreme Court struck down the ordinance as violating the First Amendment.

In explaining why hate speech is generally protected under the First Amendment and not considered “fighting words,” Justice Antonin Scalia wrote: “The reason why fighting words are categorically excluded from the protection of the First Amendment is not that their content communicates any particular idea, but that their content embodies a particularly intolerable (and socially unnecessary) mode of expressing whatever idea the speaker wishes to convey.”

Hate speech against the president

Trump isn’t the first president to face vocal, and even violent, criticism. At the height of the Vietnam War protests, Robert Watts was convicted of threatening the president in violation of federal law. Watts stated at a political rally that, if inducted into the Army (which he vowed would never occur) and made to carry a rifle, “the first man I want to get in my sights is L.B.J.”

Under Title 18 of the U.S. Code, Section 871, “[i]t is unlawful to knowingly and willfully mail or otherwise make any threat to take the life of, to kidnap, or to inflict bodily harm upon the president of the United States.” However, as the Supreme Court made clear in its 1969 decision in Watts v. United States, there is a significant difference between hate speech and a legitimate threat.

The court held Watts’s statement to be “crude political hyperbole which in light of its context and conditional nature did not constitute a knowing and willful threat against the president within the coverage of 18 U.S.C. 871 (a).”

The court acknowledged that the “nation undoubtedly has a valid, even an overwhelming, interest in protecting the safety of its chief executive and in allowing him to perform his duties without interference from threats of physical violence.” However, it also noted that “debate on public issues should be uninhibited, robust, and wide-open, and that it may well include vehement, caustic, and sometimes unpleasantly sharp attacks on government and public officials.“

With this in mind, the court reasoned:

“A statute such as this one, which makes criminal a form of pure speech, must be interpreted with the commands of the First Amendment clearly in mind. What is a threat must be distinguished from what is constitutionally protected speech.”

Accordingly, the Supreme Court agreed with Watts that his only offense here was “a kind of very crude offensive method of stating a political opposition to the president.” The same can be said of Kathy Griffin, whose hatred for Trump should not be confused with a legitimate threat to his safety. 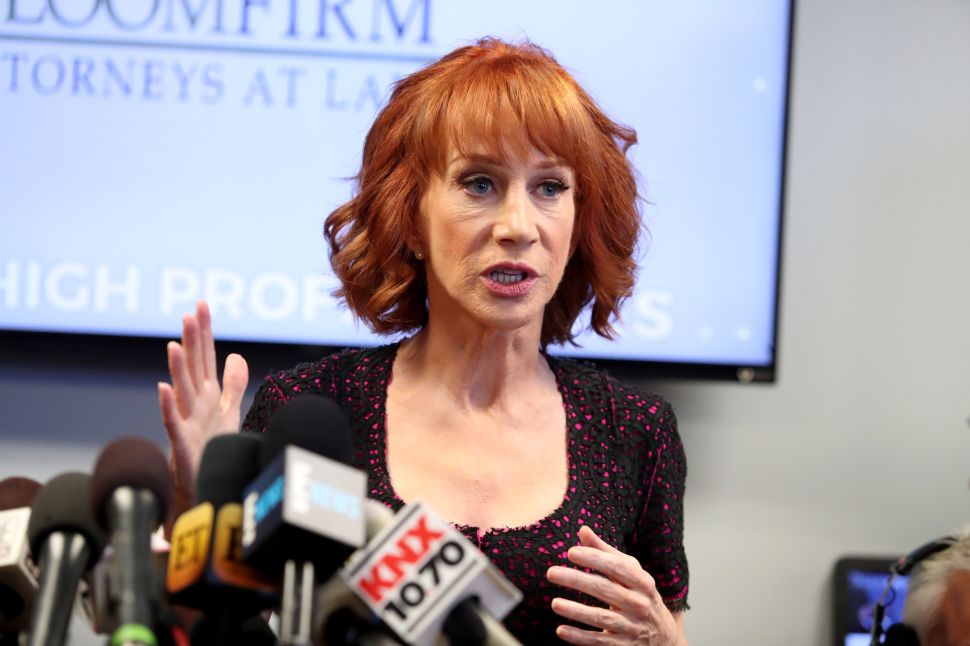