U2 is one of the greatest bands of all time. Their current Joshua Tree Tour 2017 has been both a major commercial and critical success, reminding people why they fell in love with the band in the first place.

While the band is in the midst of a tour, it’s a great time to count down U2’s five best songs. It’s an almost impossible task comparable to picking your favorite child (if you have children.) Anyway, let’s give it a shot.

During the fall of 1991, U2 released “The Fly” from their album Achtung Baby. The song didn’t perform well, and people thought Achtung Baby would become a flop. However, the second release, “Mysterious Ways,” hit No. 9 on Billboard’s Hot 100 and No. 1 on the Modern Rock Tracks chart.

“Mysterious Ways” is a psychedelic rock anthem that was so universal that it even found its way in some dance clubs. It has lasted on rock radio more than any other U2 song besides “With or Without You.” According to Songfacts, Bono says that the song is not about one particular woman but about all women in general and how they dominate men.

In March o1997, U2 released Pop, one of the most universally hated albums of the 1990s. The album, which attempted to mix techno, electronica, and rock, wasn’t as bad as people made it to be. The second single, “Staring at the Sun,” is one of the best records the band has ever recorded.

Released after the first single Discothèque instantly fell down the charts, “Staring at Sun” only peaked at No. 26 on Billboard’s Hot 100. However, it was a big adult contemporary hit and represented the perfect mix of all the different musical genres that U2 was trying to push on the album. Its psychedelic guitar riffs make the song sound like something that could have been on Achtung Baby.

Released as the second single from The Joshua Tree, this No. 1 single became the anthem of the summer of 1987. It was on the radio constantly. The video also played on MTV in heavy rotation.

“I have spoke with the tongue of angels/I have held the hand of the devil/It was warm in the night/ I was cold as a stone/But I still haven’t found what I’m looking for,” Bono sings in a higher-than-usual register with the guitars matching the ambition of the lyrics.

Rolling Stone placed this hit at No. 3 in their list of the 500 best songs ever. They recall an interview where Bono said the song was more about doubt than faith. He indicated that an early version of the song sounded like “Eye of the Tiger” played by a Reggae band.

For many in the United States, this song, this first single from U2’s 1984 album The Unforgettable Fire, is their first memory of hearing U2 on the radio, although the band had been making international strides since 1979.

The song, which deals with the inspirational life and ultimate death of Martin Luther King Jr., is actually meant to be an anthem about universal love and equality. It was the first of many U2 top 40 hits, and even though it didn’t reach higher than No. 33 on Billboard’s Hot 100, “Pride” became one of the bands signature songs.

According to Songfacts, Coretta Scott King (MLK’s widow) invited the band to the Martin Luther King Center in Atlanta during their 1984 U.S. tour. Chrissie Hynde, the lead singer of The Pretenders, sings backup vocals on the track.

The release of this track in March 1987 marked the point where U2 went from being an underground, critically acclaimed band to full-force megastar status. The first single from the iconic album The Joshua Tree instantly climbed to the No. 1 spot on Billboard’s Hot 100 and stayed there for three weeks.

The song is a hypnotic rock ballad that hits all the right notes while Bono gives one of the most pleasing vocal performances of all time. On the surface level, the song is about the struggles one goes through in a relationship. However, in the 2009 book U2 by U2, Bono claimed the song was more complex and dealt with his feelings of being with U2. 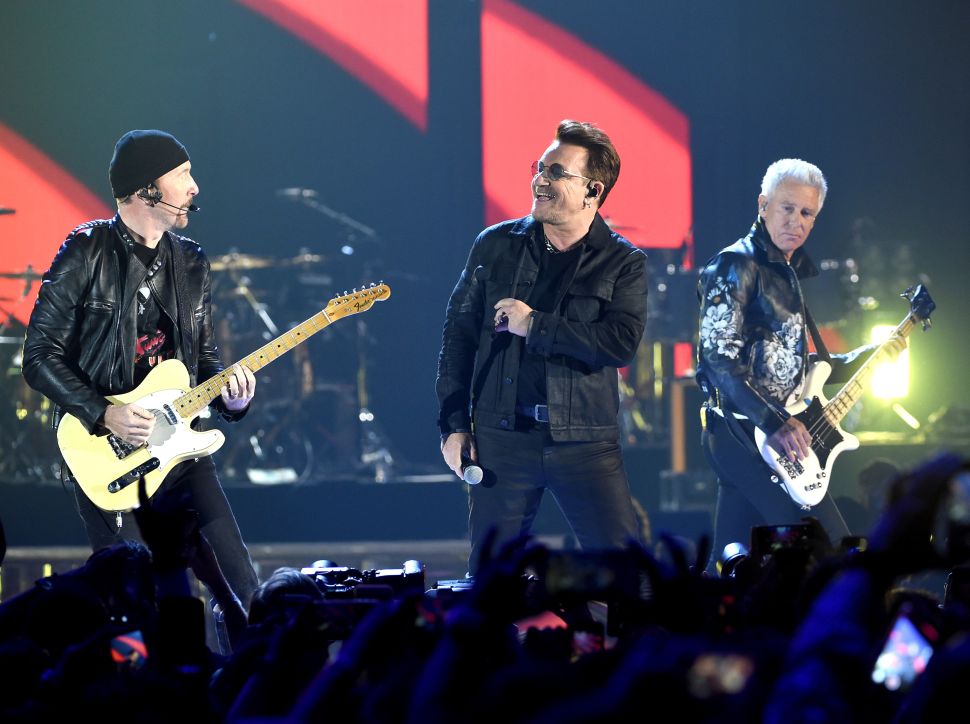 Filed Under: Entertainment, Music, U2