Three and a half years after their Revolution of Dignity at the Kiev Maidan Square, Ukrainians have lost their understanding of what’s going on in their country. The Ukrainian word most used these days is zrada, meaning treason.

Ukrainians see zrada all around them.

In 2014, street protesters chased the corrupt president out of Ukraine and freed former Prime Minister Yulia Tymoshenkon, the icon of their mutiny, from jail. She had been serving out a sentence for signing a natural gas contract with Russia’s Gazprom in 2009. The pre-revolution pocket court found that the contract was corrupt, bad for the economy, and bad for Ukraine.

Now, some in Rada, the Ukrainian Parliament, want her back in jail for the same crime.

“We demand that independent anti-corruption bodies immediately and publicly investigate the situation and inform the Parliament about the results in two weeks,” Artur Gerasimov, Presidential Envoy to the Parliament, told Rada delegates. “We call on the Supreme Rada Committees on Security and Defense Issues and the Anti-Corruption Committee to immediately invite to the hearings former Prime Minister Yulia Tymoshenko and to put the issue of high treason and corruption component of the natural gas contract of 2009 on the agenda.”

Tymoshenko believes that the reason behind the new surge of the old allegations is rooted in her faction’s fight against corruption in Ukraine. She accuses President Petro Poroshenko and his allies of making money off the war against two pro-Russia separatist enclaves. “The war does not end because Poroshenko and his entourage make money from it,” she says. “The reason why the war is going on is because they cover up the insane corruption in Ukraine. People’s hatred towards these authorities is exactly because of the war.”

Tymoshenko accuses Poroshenko and Prime Minister Groysman of high treason. Her Fatherland party in Parliament demands answers as to how Poroshenko tripled his chocolate company’s stores in Ukraine since becoming president.

“Every Ukrainian president must steal a billion dollars and put Yulia Tymoshenko in jail,” a modern Ukrainian joke goes.

Three and a half years ago, Ukrainians rose against corruption. This year, Ernst and Young’s Corruption Perception rating found that Ukraine was the most corrupt of 41 corrupt countries. Russia was sixteenth. Eighty-eight percent of Ukrainians believed that corruption was widespread in their county.

The money bags that financed the Maidan revolution, like Ukrainian oligarch Ihor Kolomoysky, have long enjoyed peace and quiet in Switzerland, managing their empires from afar.

The foreign professionals, a motley crew of reformers who were invited to help fix the Ukrainian economy—named variags after ancient Vikings—have mostly left.

Chicago-born Natalie Jaresko, the finance minister of Ukraine who was invited to come from the U.S. to fix the Ukrainian economy, decided not to wait for the results of the reforms she enacted. She is now back in America and is executive director of a U.S. federal control board overseeing Puerto Rico’s finances, with a comfortable annual salary of $625,000.

Mikheil Saakashvili, the variag from the former Soviet republic of Georgia, gave his diagnosis: “Ukraine would need another 20 years of toil to rise economically to the level of the pre-Maidan years.” Poroshenko fired the former president of Georgia from his position as governor of the Odessa region.

Ukrainian reformers, like post-Maidan Prime Minister Arseniy Yatsenyuk, have also resigned. In an interview in March, he estimated his net worth at “more or less $1 million.” Most believe it is on the “more” side; some even estimate a billion U.S. dollars.

Head of the Ukrainian National Bank, Valeria Gontareva, having declared $2 million in income in 2016, resigned from her post in May. The list goes on.

In May, Prime Minister Volodymyr Groysman said he was prepared to resign if his ambitious retirement reform bill did not pass Parliament. The reform bill would increase monthly retirement payouts to 12 million Ukrainians from $51 to $60, or even $70. Before Maidan, payouts were $190.

The average monthly salary in Ukraine is about $230. Before Maidan, it was $410.

This year, real estate analysts predict that the value of apartments in Kiev will sink another 10 percent—on top of 2016’s 25 percent drop. A one-bedroom apartment in Kiev can be bought for $15,000. Real estate prices have sunken to 1990s-levels, Ukrainian portal Vesti reported.

Free medicine, which is guaranteed by Article 49 of the Ukrainian Constitution, no longer exists.

In the meantime, Ukraine’s national debt is rising. In 2016, it grew 8.3 percent. The Ministry of Finance reported that it is now more than $74 billion—67 percent of country’s GDP.

Georgy Tuka, in charge of issues of occupied territories (two separatist regions supported by Russia), openly calls for dictatorship. “The state system that we have today is not capable of leading our country out of the deepest crisis, which we are in now. I support a more stringent measure: dictatorship,” he said to Ukrainian NewsOne. “We have been told lately that we have democracy [in Ukraine]. It is a pure lie. I do not think that the elections that are being bought and sold at the polling stations, then bought in the courts, and then are formed by big money are our bright future.”

But changes to the current political structure can hardly be expected. Ukraine is mired in war. Guns prevail over law. Yuriy Bereza, the deputy head of the Parliamentarian faction backed by Minister for Interior Arsen Avakov, promised to massacre the opposition if it ever tried to return to power. He said, “I have a plan B. There will be no civil war. The will be no revanche. There will be the Night of Long Knives. That’s it.”

He knows what he’s talking about. Dozens of political activists and journalists have been murdered since the days of Maidan. Exiled Ukrainian journalist Anatoly Shariy admits that before Maidan Ukraine was not a crime-free paradise but “nobody could have simply come to you, kill you, and just walk away.” Shariy lives in undisclosed location in France.

Opposition parliamentarian Natalia Korolevska, a former presidential candidate and former minister for Social Policy, is at risk of becoming blind after radicals in paramilitary uniforms threw a green solution on her face during a meeting with constituents on June 6 in Odessa. Police did not interfere. The criminals walked away, not even bothering to cover their faces.

Only 1.9 percent of Ukrainians trust President Petro Poroshenko. An overwhelming 78.1 percent do not.

In fact, Poroshenko is so despised in Ukraine that one store in Kiev prints “Poroshenko asshole” on their receipts.

A secret telephone conversation this spring between Poroshenko and Vladimir Putin was leaked. According to the Kremlin, it was conducted in “a respectful and correct manner”and “the heads of the states periodically switched to a playful, ironic tone.” Ukrainians were infuriated.

The matters discussed during the conversations were never disclosed.

What country could the president of Ukraine have talked about on June 11, when Ukrainians were celebrating the first day of their visa-free travel to the EU?

“Farewell, unwashed Russia, country of slaves, country of masters!” Poroshenko quoted Russian poet Mikhail Lermontov’s poem while addressing “his people” at the moment of, from his perspective, Ukraine’s final departure from the “Russian world.”

Curiously, Mikhail Lermontov is Putin’s favorite poet. He quoted the same poem in 2015 during his meeting with a selected group of Russia’s teachers.

Poroshenko’s chocolate factory in the Russian town of Lipetsk was closed only last April. It operated for more than three years on the Russian market since the beginning of the “Russian aggression.” The factory sent $72 million in dividends to the Ukrainian president’s bank accounts.

From the perspective of the suspicious Ukrainian public, this strange love-hate attitude towards Russia within the Poroshenko family is not limited to the president.

His 16-year-old son, Mykhailo, a student of the prestigious British Concord College, recently posted a picture of him wearing a sweatshirt that said “Russia.” The photo created such an uproar that the president apologized and made his son go on TV wearing a T-shirt that said “Ukraine.”

Additionally, Yulia Poroshenko, his daughter-in-law, still has her Russian citizenship. The president’s family ignored an appeal by Ukrainian journalist Dmytro Gnap to burn her Russian passport on the anniversary of Maidan.

Poroshenko says that visa-free travel to Europe, which allows Ukrainian tourists to stay in EU countries for 90 days with no rights to employment, is what the Maidan was all about. This was what they were fighting for on Kiev’s streets in 2014.

More than 10,000 Ukrainians have been killed on both sides of the divide since 2014, and for this?

In terms of zrada on the international front, it is rumored that Donald Trump will ease the economic sanctions imposed on Russia, and Europe is signaling that it is tired of confronting Russia about Ukraine.

Ukrainians suspect that their country is nothing but a major headache for the Trump administration. Ukrainian politician Nadia Savchenko, who was freed from Russian prison a year ago, promised dire consequences for the U.S. if it decides to change its policy on Ukraine. In an interview to ZIK in May, she sent this message to the U.S.: “If you don’t want to support us, we shall support your enemy [Russia], and we will start fighting against you.” 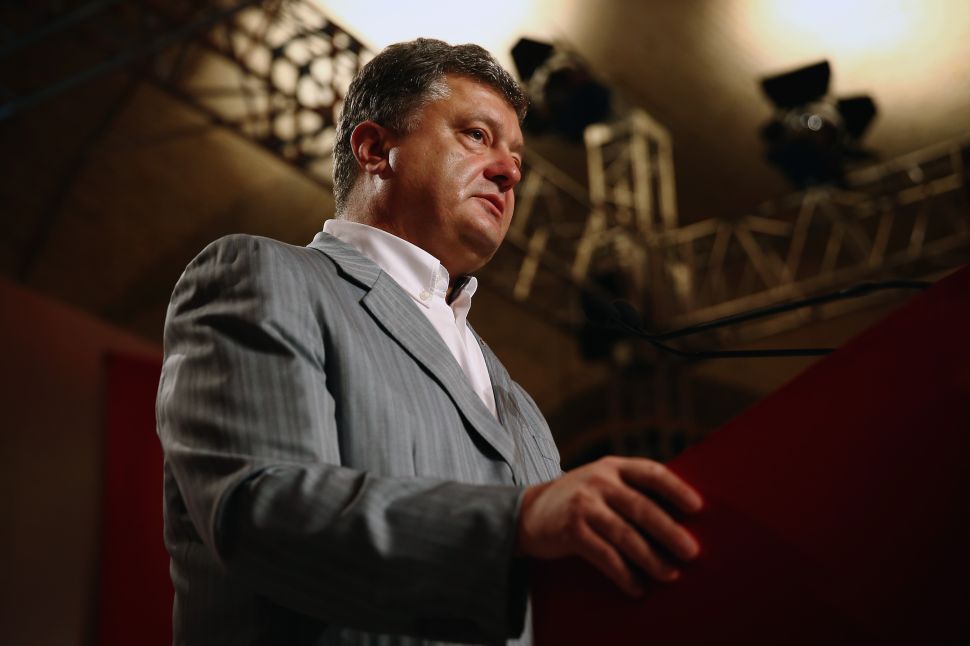