The United States is finally arming the Kurds of Syria in a systematic and official way, and it’s about time. Finally the Kurds are being armed with serious, sophisticated, heavy weapons that will enable them to confront ISIS’ artillery and tanks.

Kurds are the only group on the ground with the motivation to confront ISIS. They have battle experience, but the U.S. never armed them with more than light weapons, which was simply foolish. No matter how strong their motivation is to succeed, pistols and machine guns are no match for tanks and heavy artillery.

Not everyone thinks arming the Kurds is a good idea. Turks and Kurds have been engaged in long-term battle. Turkey is not happy with the actions of the United States, and U.S. leaders and diplomats need to give Turkey assurances that the weapons given to the Kurds will not be used to attack them.

Col. Ryan Dillon is the new United States Spokesman for Operation Inherent Resolve, which is the name of the multinational coalition organized by the U.S. Dillon replaced Col. John Dorrian.

Dillon has said that the U.S. has received assurances from the Kurds that the weapons will only be used against ISIS and that the U.S. has relayed this to Turkey. According to the New York Times, Dillon said, “Wherever possible our advisers will monitor the use of the weapons and supplies we give the Kurdish elements of the SDF, ensuring use only against ISIS.” He added, “Any alleged misuse or diversion of U.S. support will be taken seriously and lead to the possible curtailment of support if verified.”

This isn’t enough for Turkey. The Turks are arguing that the Kurds are terrorists. For decades, Kurds have been chipping away at Turkey in their fight for an independent state. Turkey’s point is, in essence, that you do not fight one terrorist group by arming another.

Turkey has a point—but it conflicts with U.S. interests.

The United States is reluctant to put American boots on the ground in the region. ISIS and al Qaeda often argue that the United States is already too involved in Arabic and Muslim life. Therefore, having U.S. forces on the ground will serve the public relations needs of ISIS and al Qaeda and inspire their recruitment. That boomerang effect is not a chance anyone wants to take.

Other than properly arming the Kurds, there aren’t many options for fighting ISIS.

Most local and regional forces have failed miserably in that quest—even after receiving U.S. military training. Most local troops and units are afraid for their lives. They are afraid that if they are captured by ISIS they will be tortured and killed by decapitation. There are videos that corroborate that fear.

Instead, the locals try to blend in or run away. Two years ago, when ISIS advanced on the Iraqi city of Mosul, they came with only 800 fighters. Already present in Mosul were 35,000 local police and soldiers. Mosul, the second largest city in Iraq, was home to two million people.

When ISIS fighters approached Mosul, all 35,000 soldiers and police ran away. Many stripped to their underwear to show that they were unarmed as they ran away. They also left the heavy and light weapons given them by the United States, including tanks, hummers, anti-aircraft guns, heavy artillery and ammo.

The Kurds do not have the luxury of flight; they cannot run away and they cannot blend in. They are different and no country will take them in. The only choice they have is to fight. Even without the help of the United States, they must fight because it’s a fight for their very existence.

Over the years, the U.S. has made many promises to the Kurds, most of which went unfulfilled. Over time, Kurds lost faith in U.S. pledges of help and assistance. But this time it’s in the best interests of the U.S. for the Kurds to be well armed.

The United States is committed to destroying ISIS and providing better weapons to the only group in the region willing to fight them is the only way to fulfill that commitment. 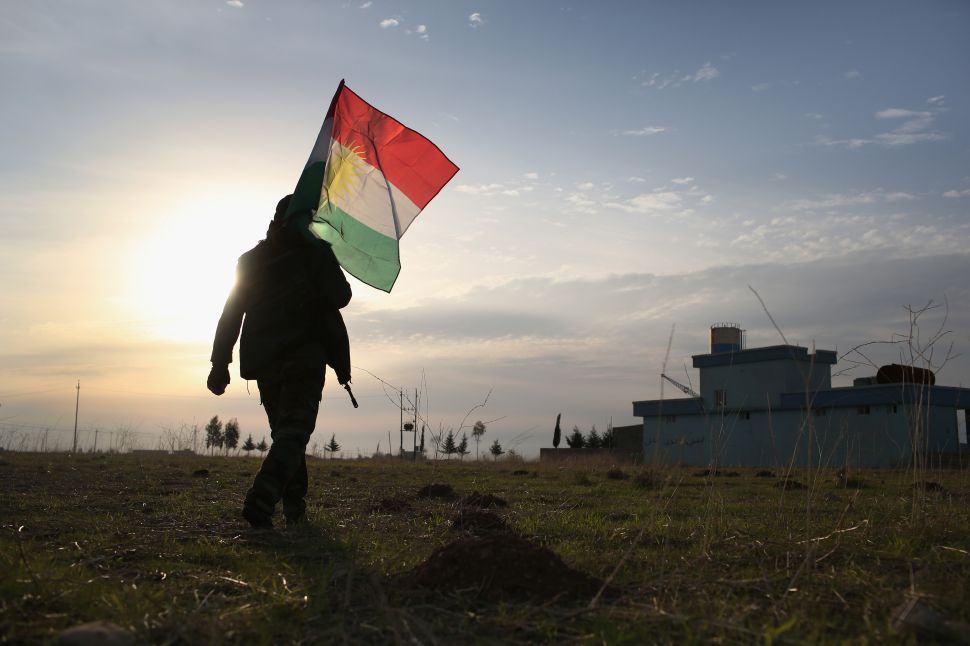