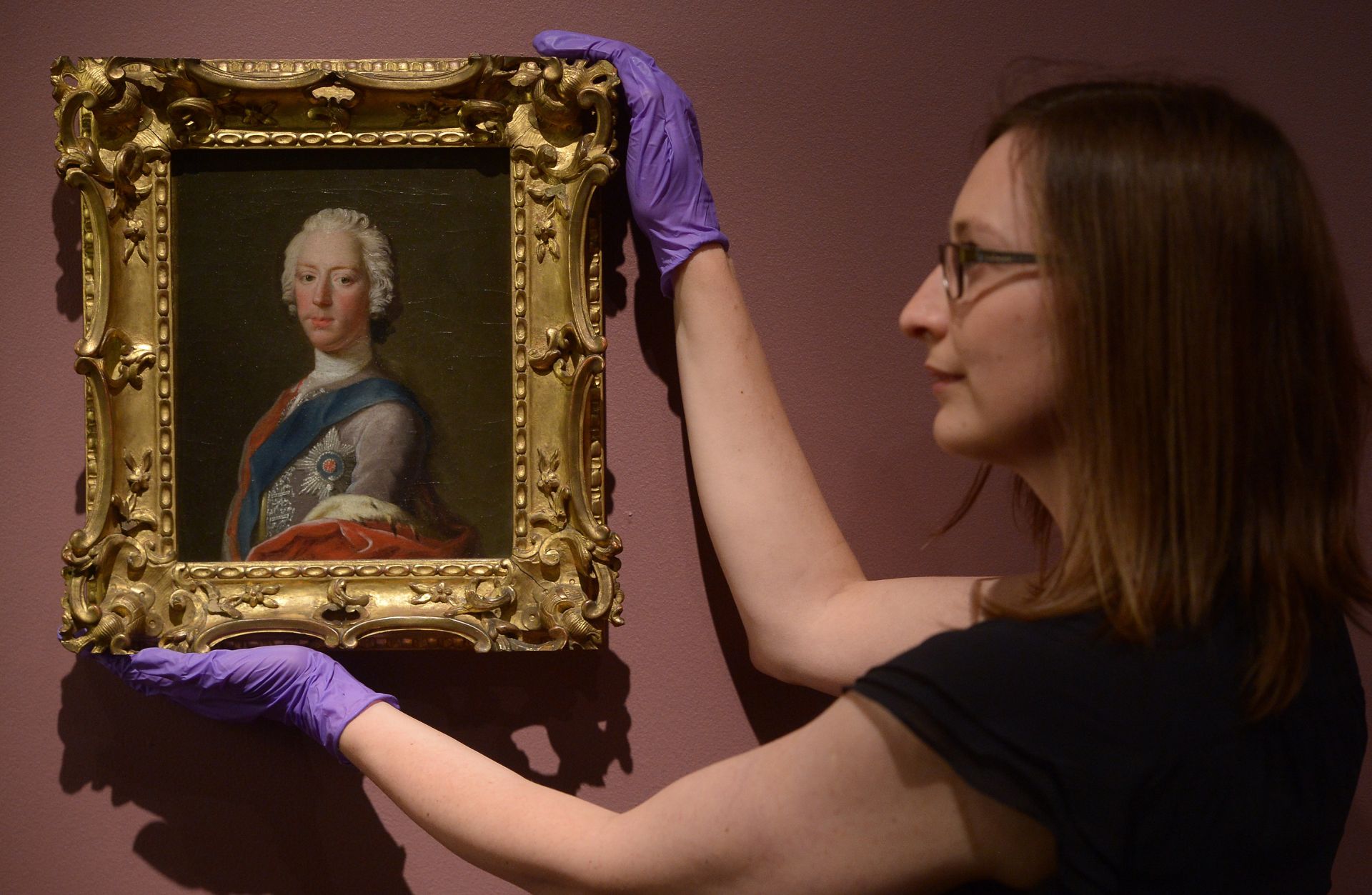 Adrienne Hynes, Assistant Curator National Museum of Scotland, with the 'lost' Ramsay portrait of Charles, the only image of him taken during his time in Scotland.
Neil Hanna Photography 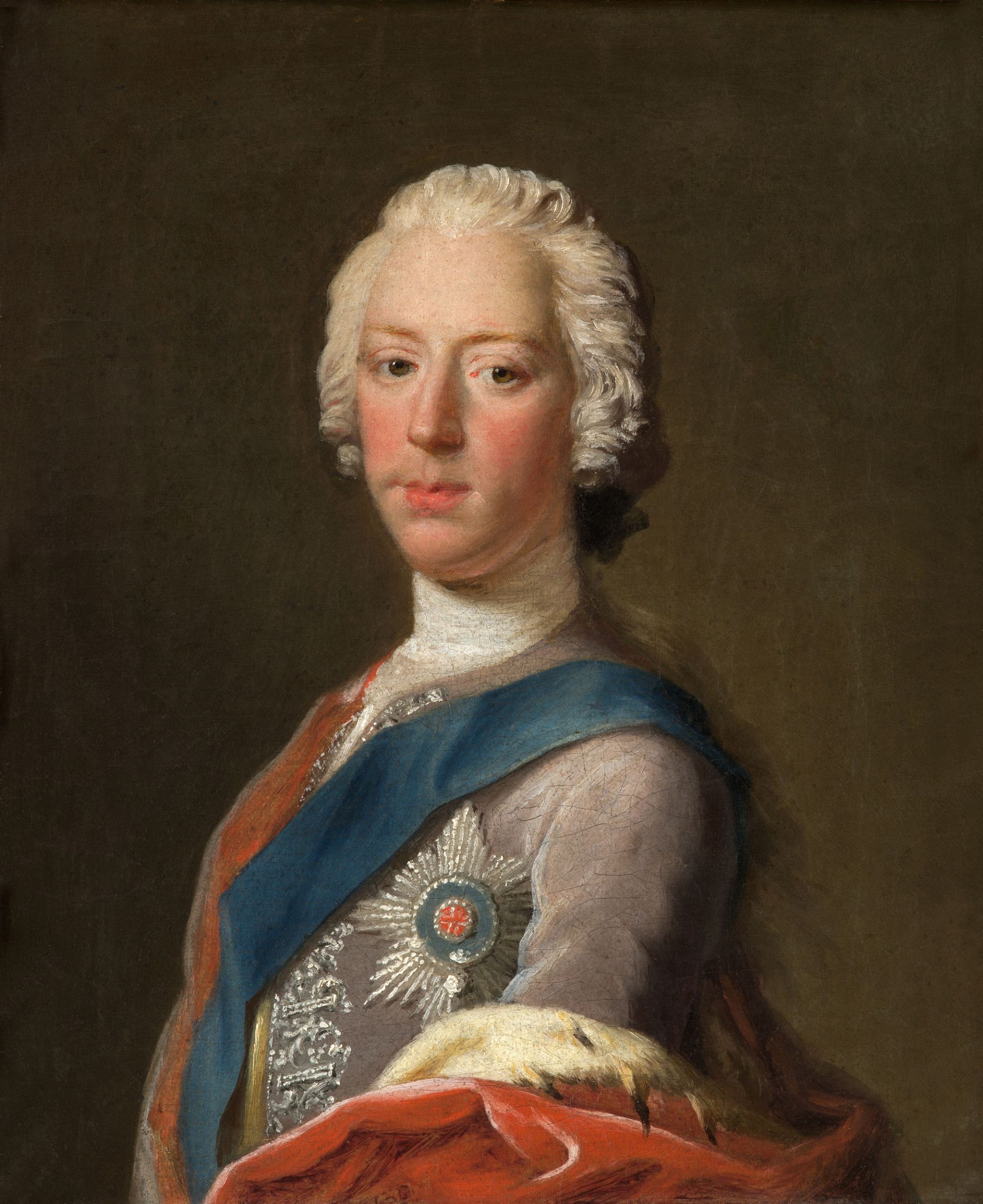 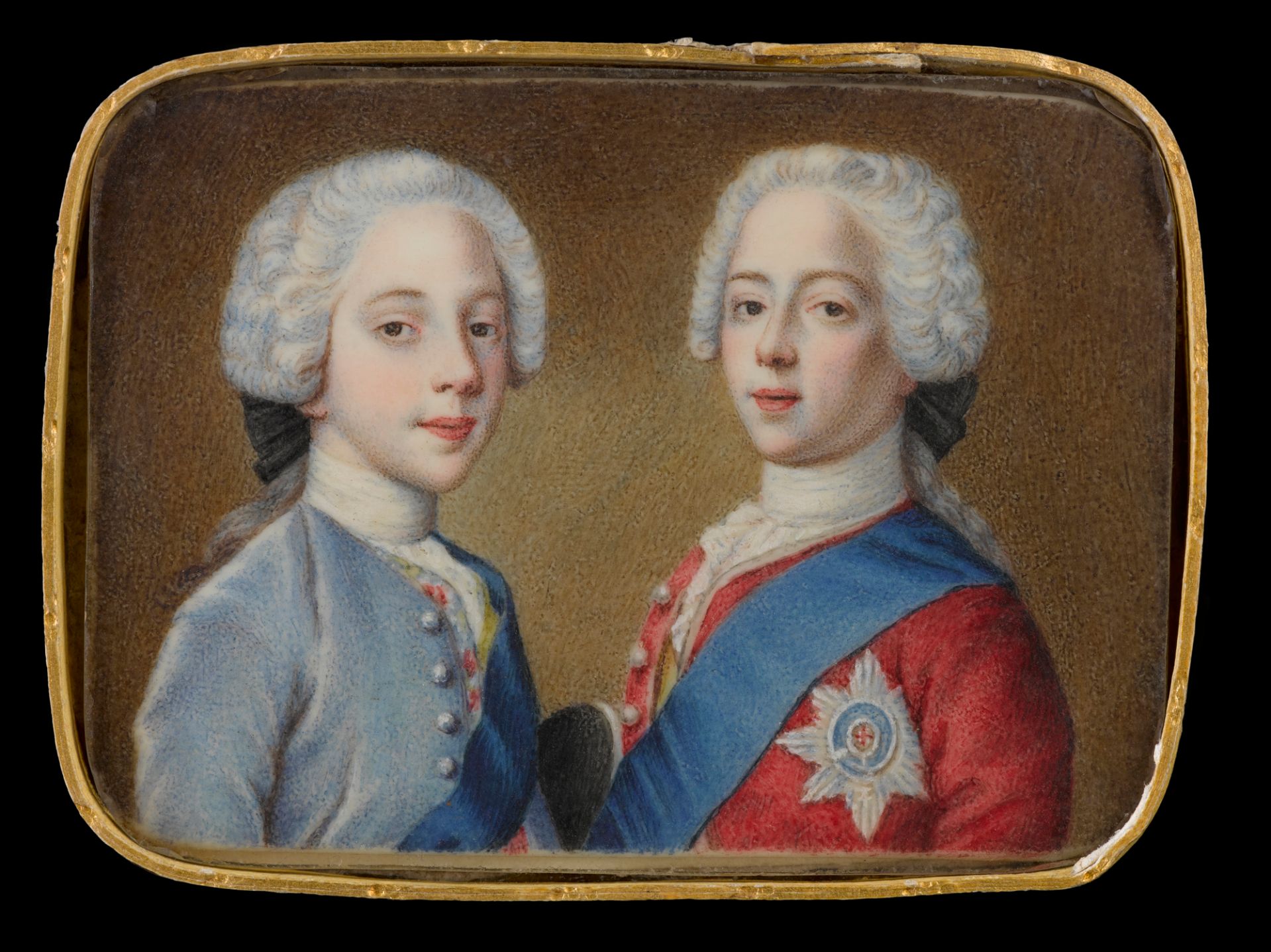 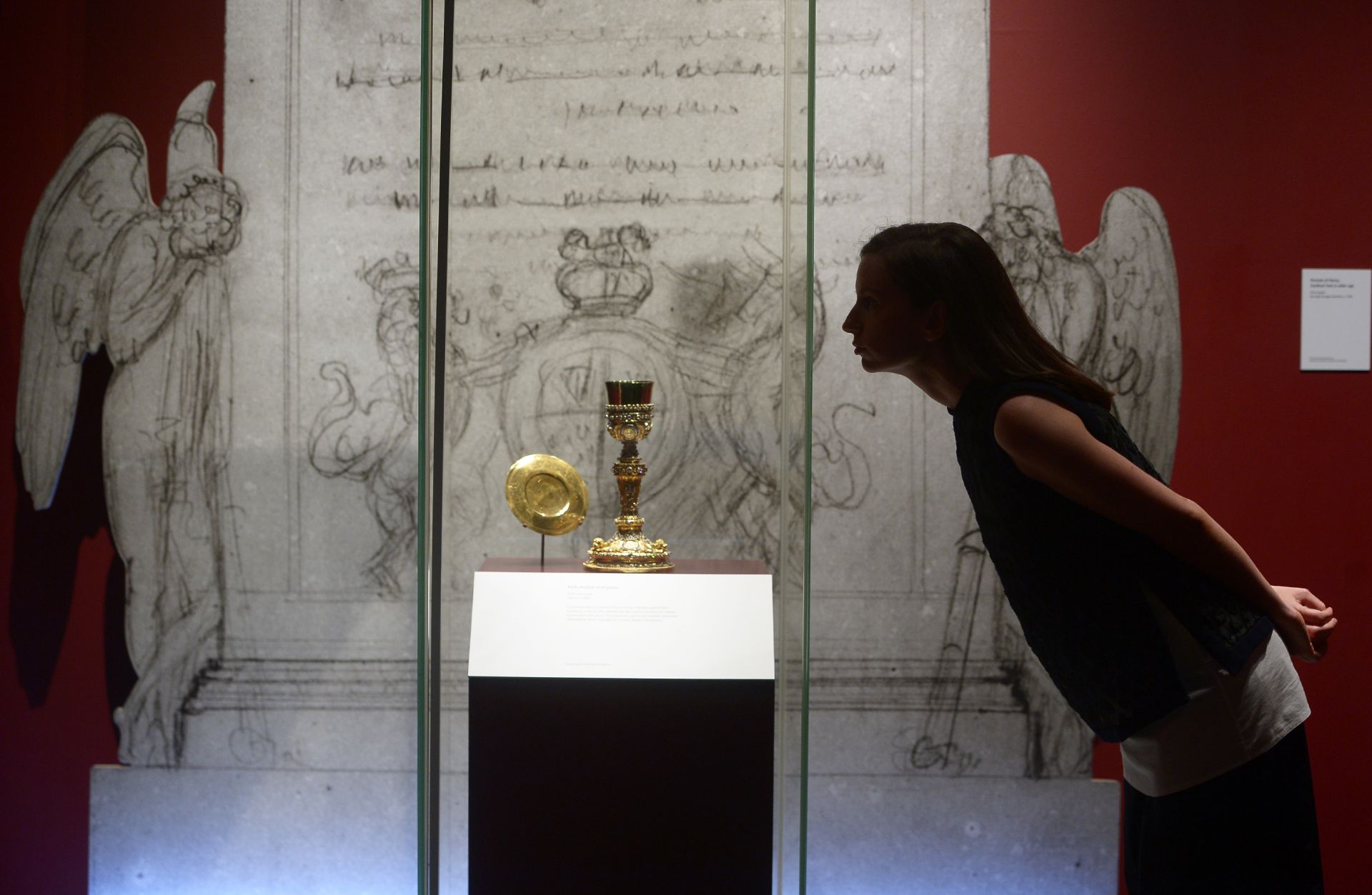 Alice Wylie of the National Museum of Scotland has closer look at the the stunning York Chalice and Paten, on loan from the Sacristy Museum. The elaborately decorated gold Communion set, inlaid with 130 diamonds, belonged to Charles' younger brother Henry Benedict Stuart (Cardinal York), who gifted it to the Church. It has never been on display in the UK.
Neil Hanna Photography
Advertisement 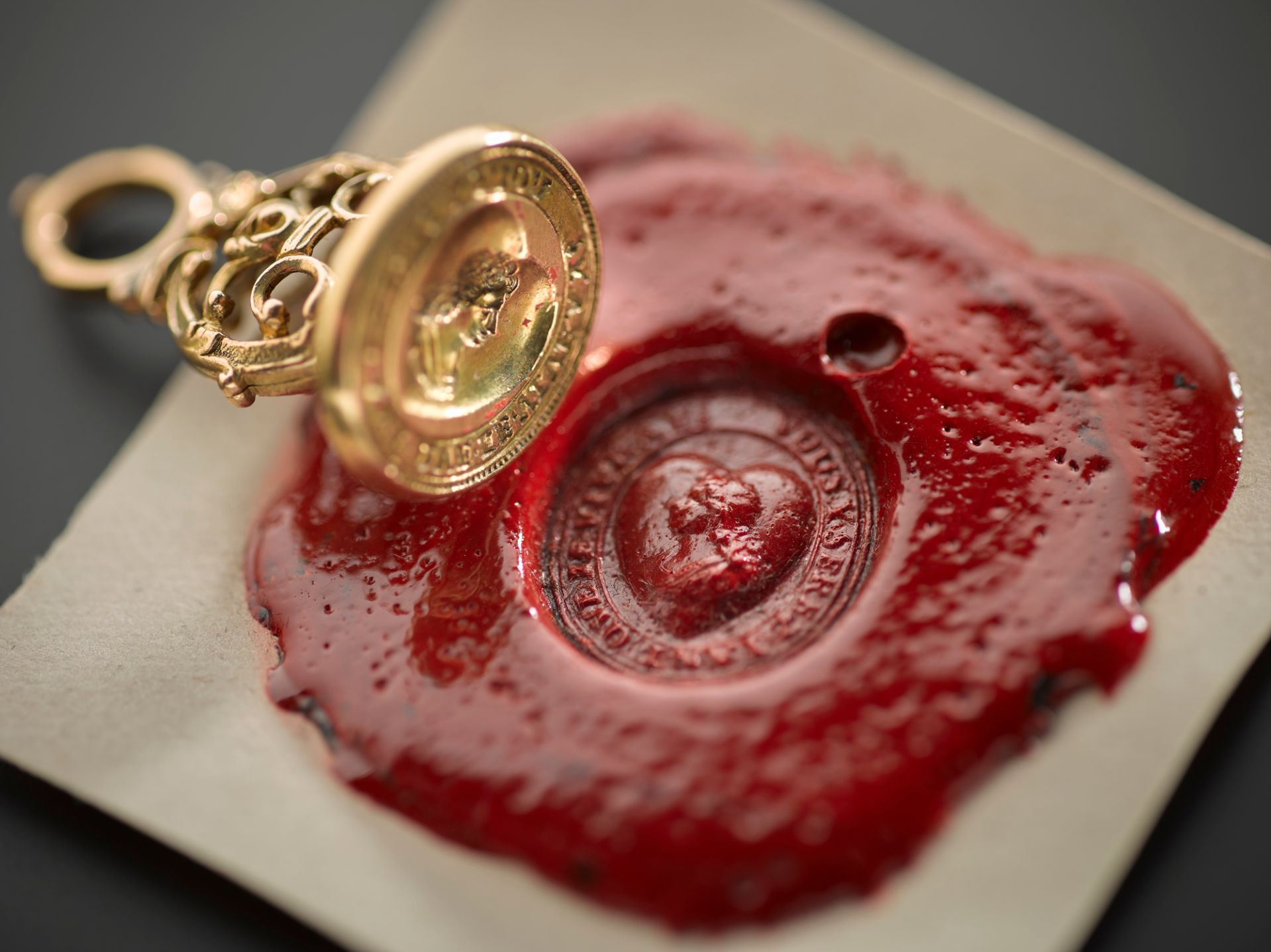 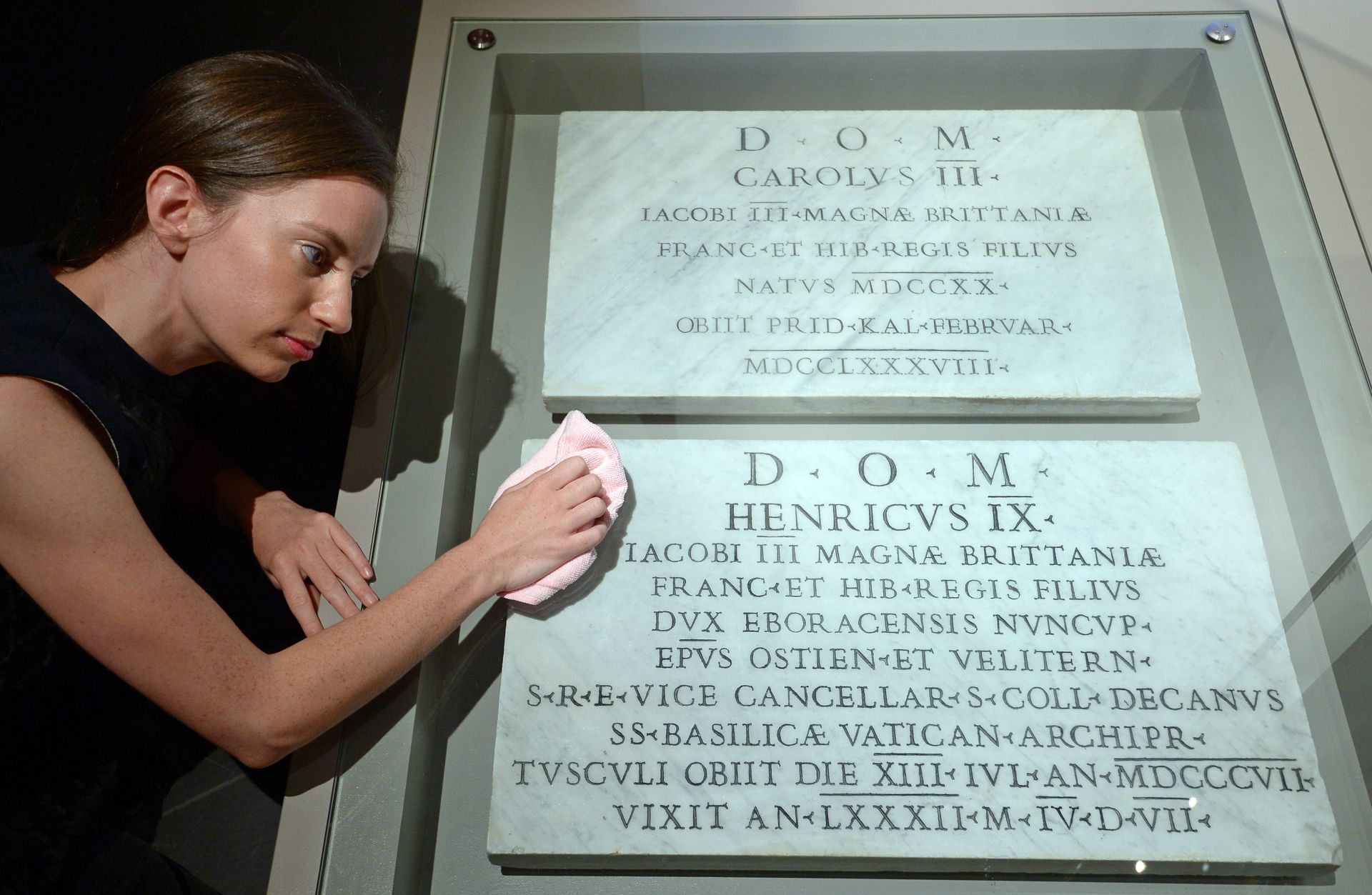 Alice Wylie of the National Museum of Scotland cleans the glass protecting two of the three marble grave markers, formerly in St Peter's Basilica, for Charles Edward Stuart and his younger brother, Henry Benedict, both of which have left Rome for the very first time as loans from the Scots Pontifical College. James, Henry and Charles are interred in St Peter's Basilica, with James being the only king ever to be afforded the honor of burial in the Vatican.
Neil Hanna Photography 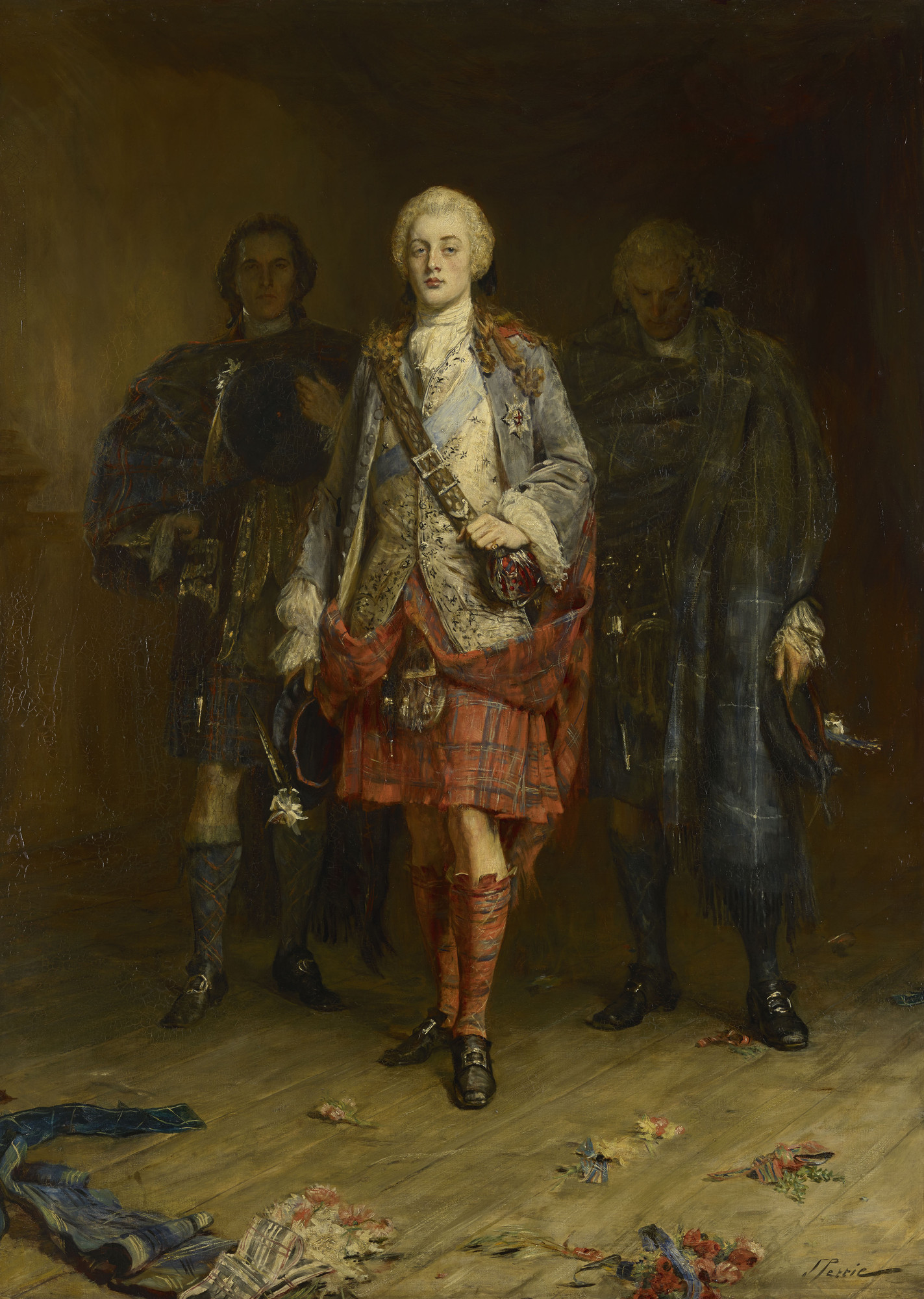 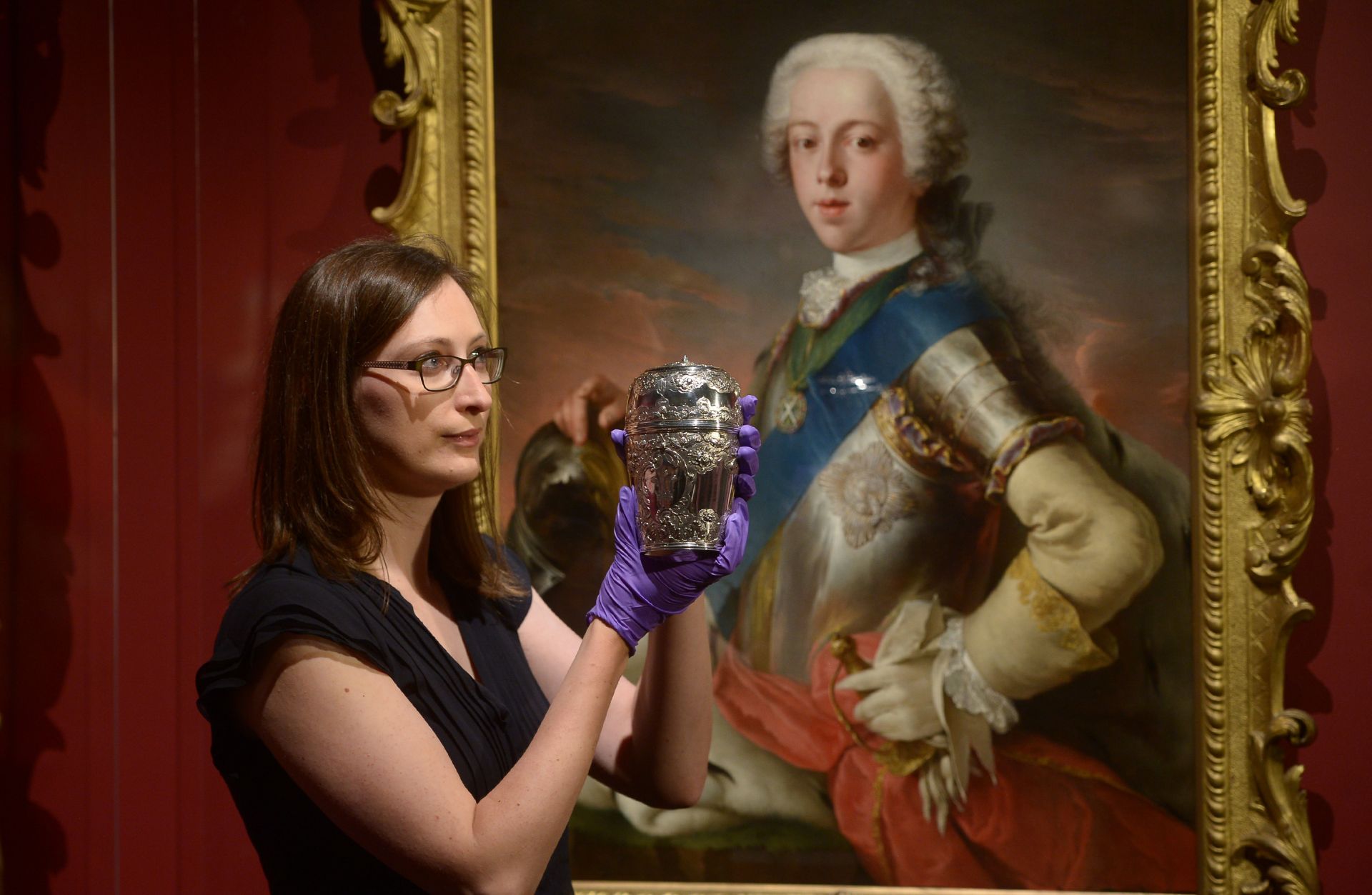 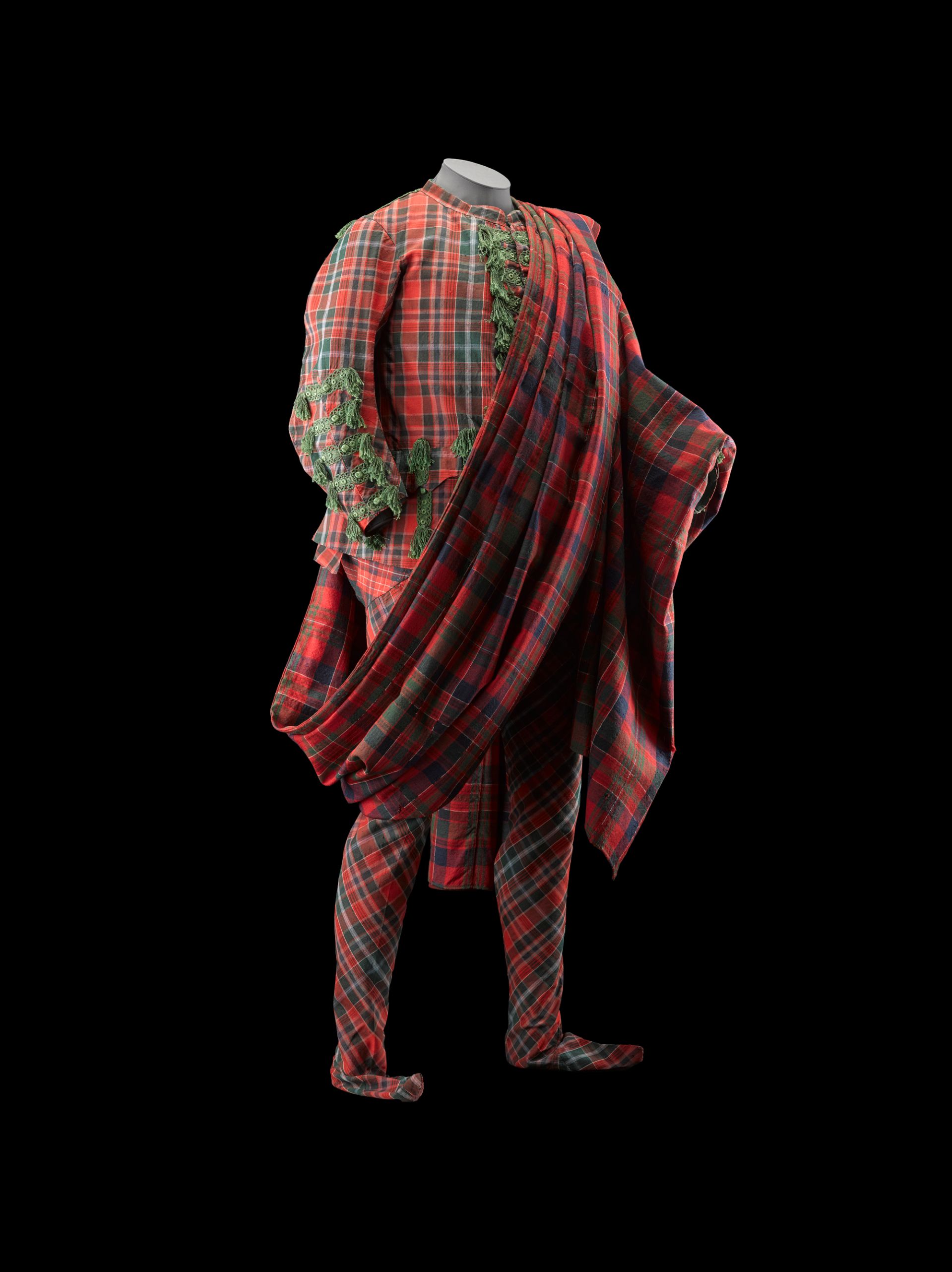 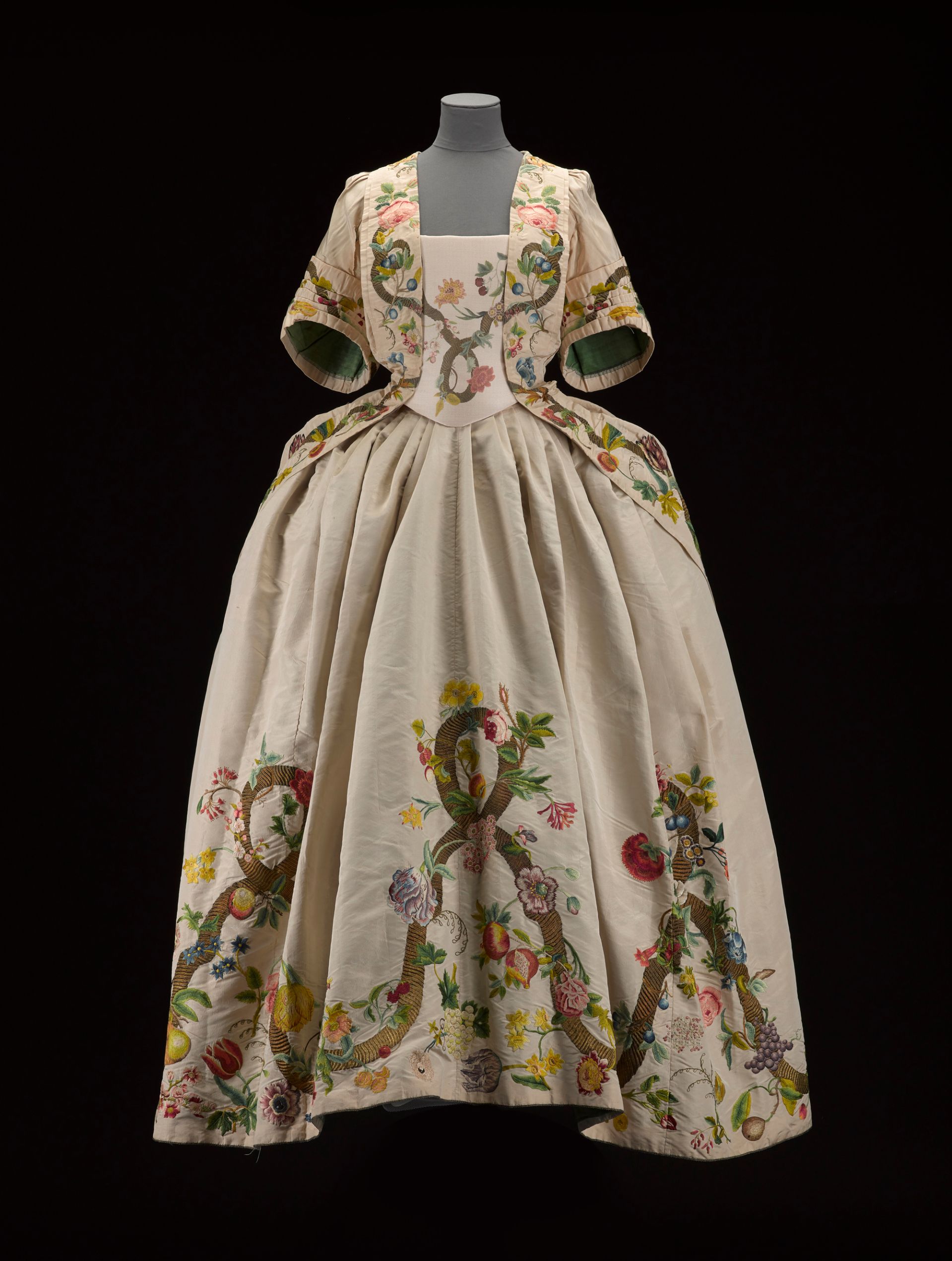 Woman's dress of cream-coloured corded silk, said to have been worn by Margaret Oliphant of Gask at the Great Ball of Holyrood after the Battle of Prestonpans.
Courtesy National Museums Scotland
Advertisement 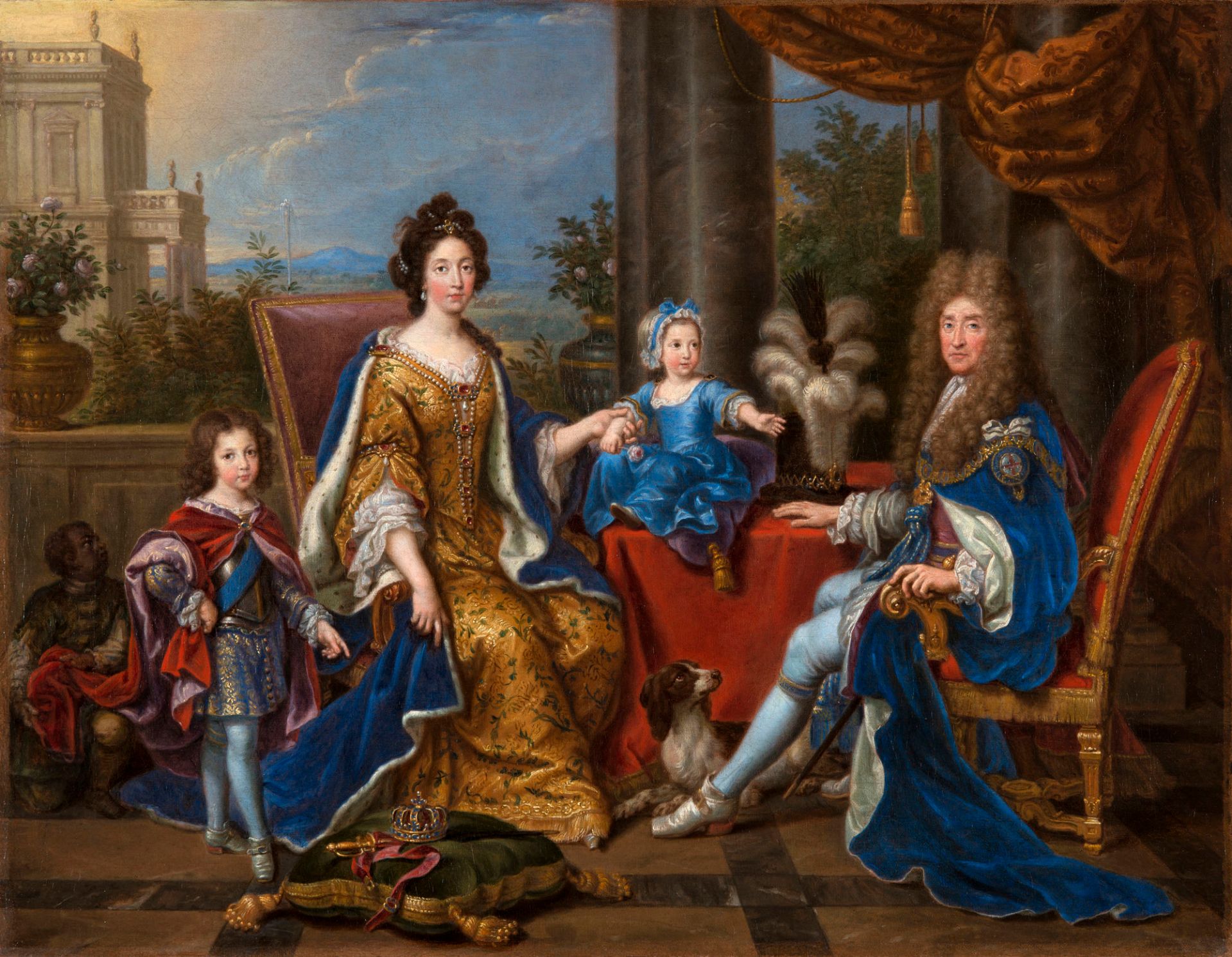 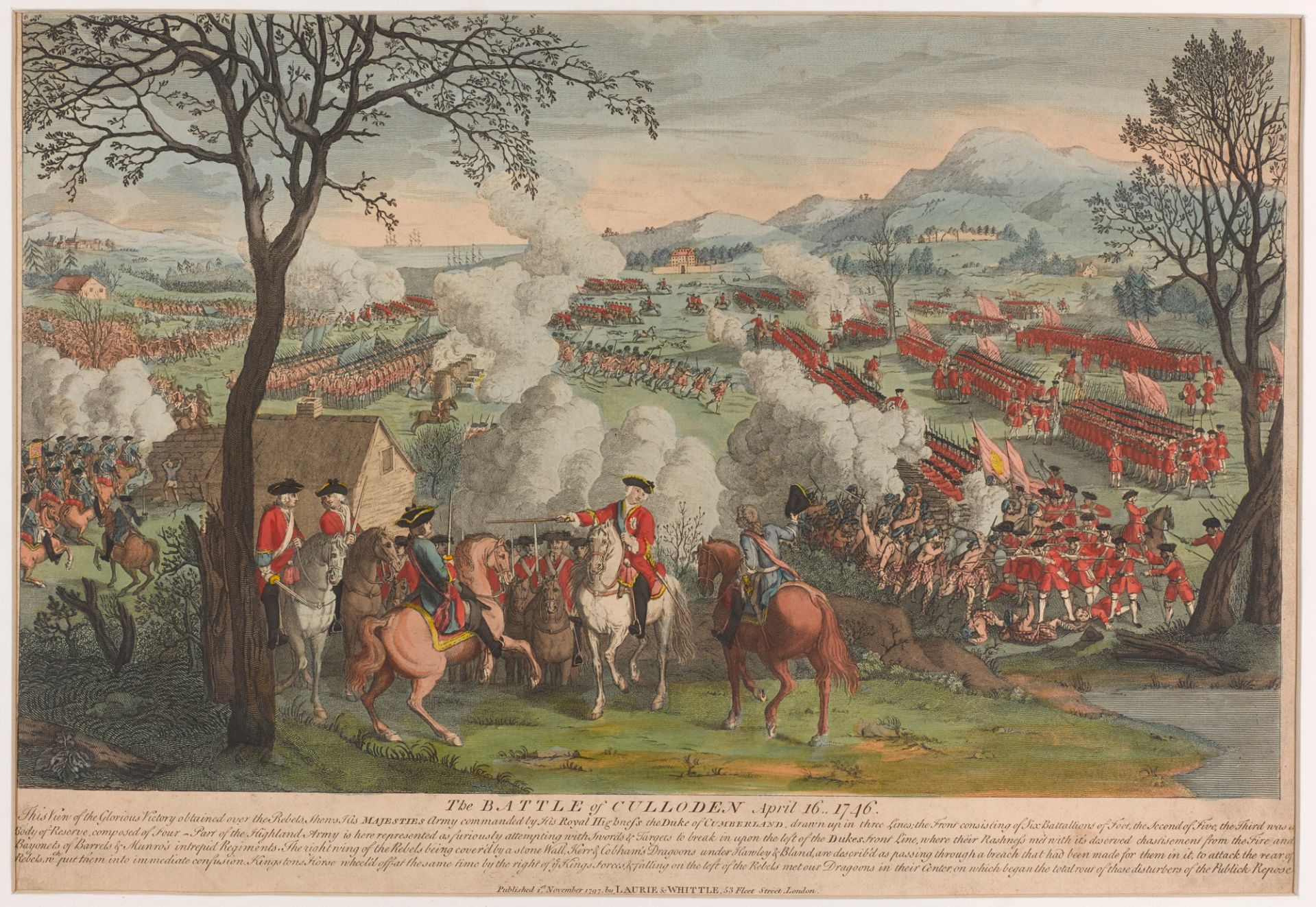 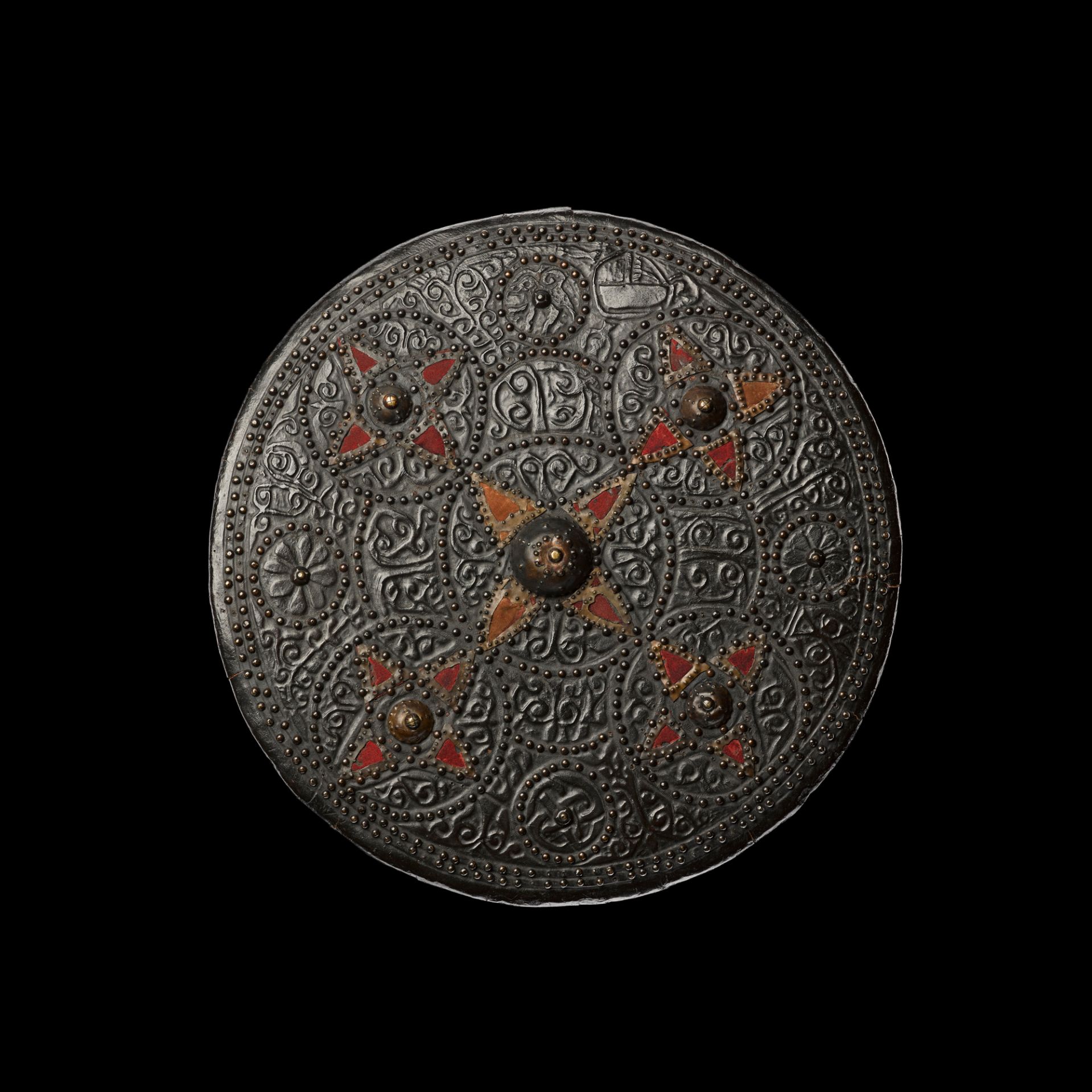 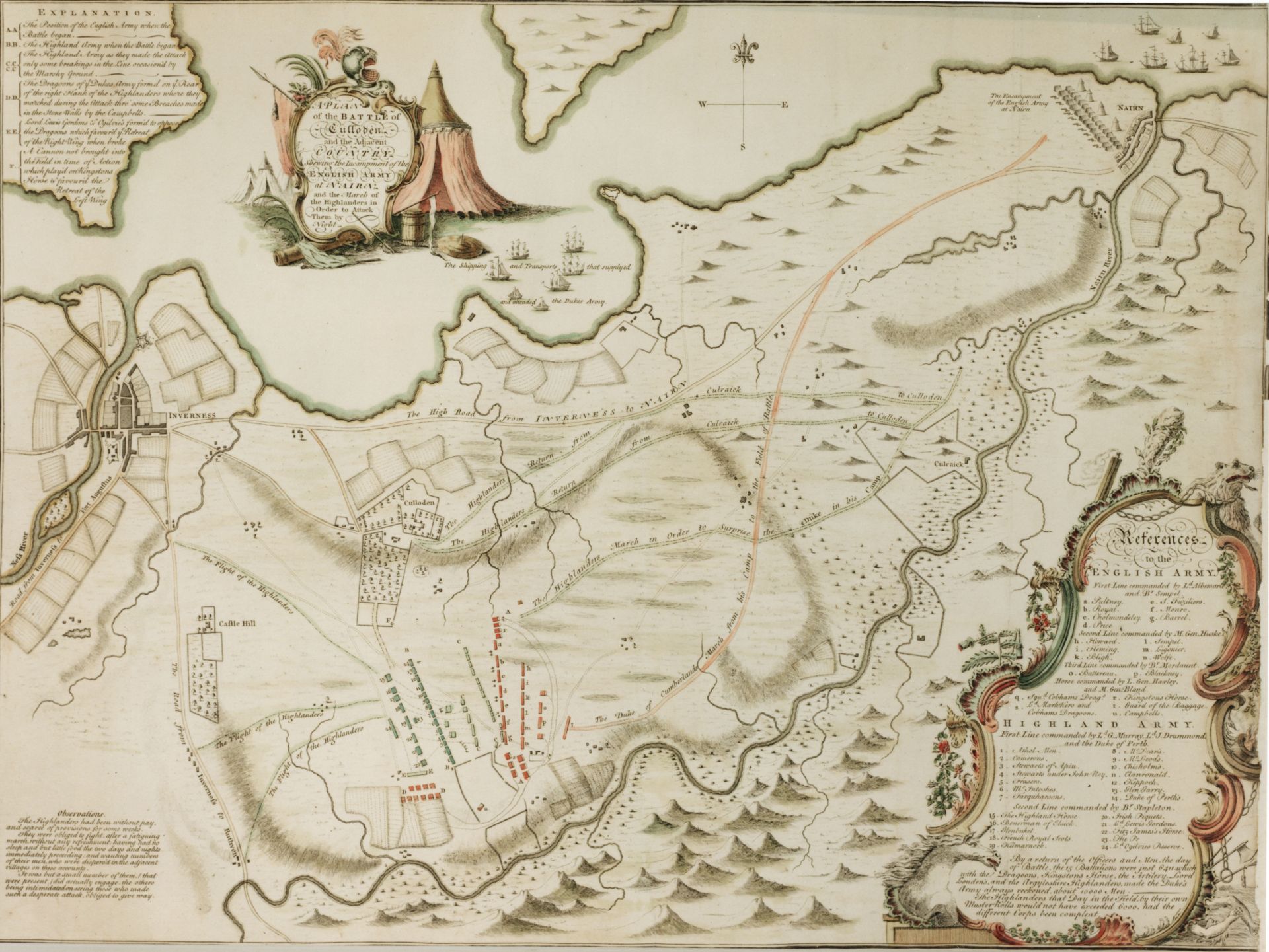 John Finlayson, Engraved map showing a plan of the Battle of Culloden and the adjacent country, 1746.
Courtesy National Museums Scotland 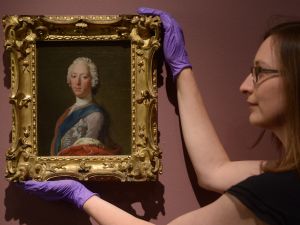 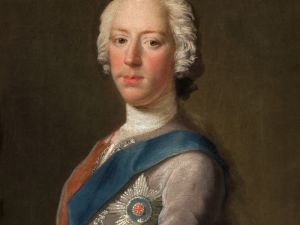 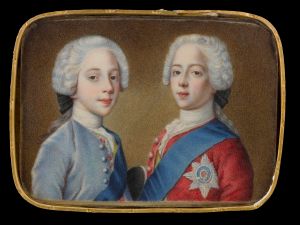 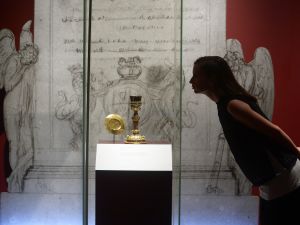 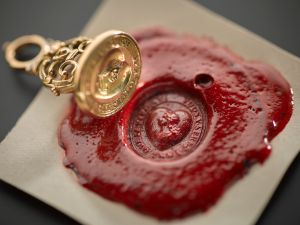 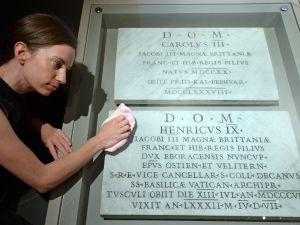 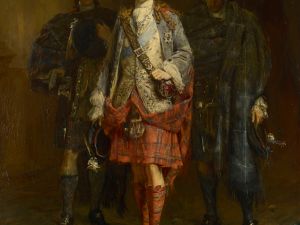 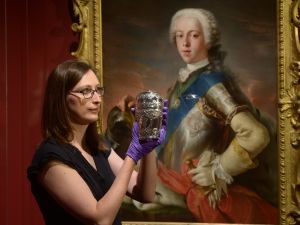 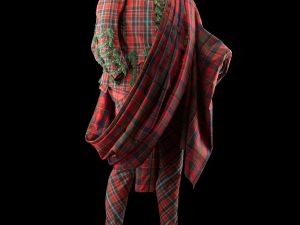 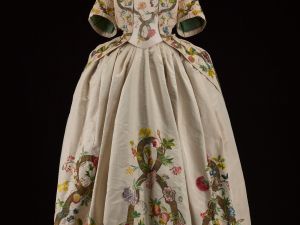 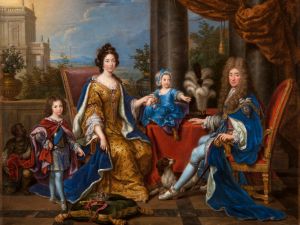 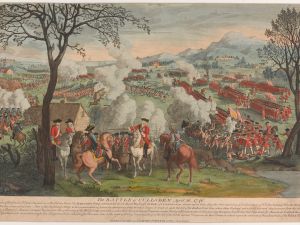 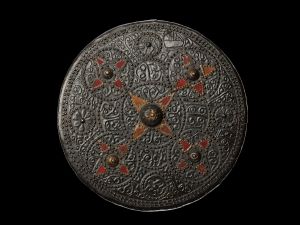 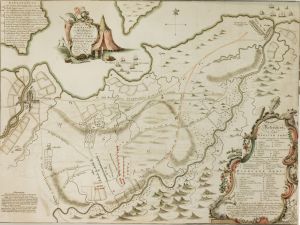 Starz’s TV adaptation of author Diana Gabaldon’s sci-fi, romance series Outlander has introduced audiences far and wide to the story of the Jacobite rebellion, a critical period in Scottish, and European, history. But while the show, and other pop culture representations of the period, have romanticized Charles Edward Stuart’s (a.k.a. Bonnie Prince Charlie) fight to take back the British throne—a mission which ultimately led to a devastating defeat by way of a historic battle in the Scottish Highlands—much of the story still remains unknown to the public.

Now, a major exhibition opening today at the National Museums Scotland hopes to change that. “Bonnie Prince Charlie and the Jacobites,” set to run through November 12, promises to be the largest show on the subject in over 70 years, and will include over 300 objects, many never seen publicly before, and a selection of works on rare loan from the Vatican which are leaving the confines of Rome for the first time ever.

If you’re unfamiliar with the Jacobite tale—which is described as “multi-faceted” and “contested” in a release from the museum—the story (in brief) centers around a movement which sought to reinstate the exiled Roman Catholic royal James VII and his family to the British throne, and oust the protestant Hanoverian leaders ruling between the 17th and 18th centuries. But while there was certainly strong support for the movement in Scotland, exhibition organizers hope the show will clarify that the Jacobite story is just as important to Scottish history as it is to all of European history.

“There were Jacobites who were English, Irish, Welsh…,” exhibition curator David Forsyth told me by phone. “The Jacobite’s story is not merely a Scottish story, it’s a European wide phenomenon.” Another common misconception, according Forsyth, is the notion that most Jacobite supporters were themselves Catholic, when in fact the majority of Stuart supporters were actually Episcopalian.

Nevertheless, the Jacobite story still has its deepest roots in Scotland. “Charles comes to the Highlands because he has support with chiefs,” says Forysth. “The social structure [of the clans] allowed him to raise a body of men. The clan system was still intact, and there were channels and infrastructure to put an army in the field.”

It’s for that reason that the Jacobite’s final of five challenges to take back the thrown ended there on Culloden field, the historic site where Charles Stuart’s Highlander army was defeated, and which tourists can still visit today. But Charles’ defeat is not where the story ends, nor is his eventual death in 1788. “A lot of people don’t realize the Bonnie Prince’s father was still alive after the 1746 final defeat of the Jacobites,” says Forsyth.

The National Museums Scotland has included a diverse collection of objects (nearly two thirds from its collection) spanning two centuries to tell the more complete story about the Jacobite movement and its key figures. From a tartan frock coat believed to have been worn by the Bonnie Prince himself to the prince’s silver targe shield and a silver traveling canteen which was lost during the Battle of Culloden, the exhibition brings together paintings, costumes, original documents, weapons and jewelry, all with connections to the rebellion.

Undoubtedly, two highlights on view will be Allan Ramsay’s iconic portrait of Charles Edward Stuart, the only depiction of the prince during his short fourteen month tenure in Scotland. And a miniature depicting Charles and his brother Henry, who went on to rise high through the ranks of the Catholic church in Rome, where the brothers and their father are interred. (James remains the only king to be buried at at the Vatican.)

For the occasion, the Vatican has loaned four key artifacts to the museum, shedding light on the fact that the Stuart’s story continued on after Culloden and ended in Rome. The Vatican has loaned three marble grave markers belonging to Charles, Henry and James, each inscribed with the royals’ titles in Latin. And from the Capitolo di San Pietro comes the gold and diamond-adorned York Chalice and Paten, which once belonged to Henry. “[The chalice] represents the heights to which Henry rose in church,” said Forsyth.

On the legacy of the Jacobites and the Bonnie Prince, Forsyth tells me, “It’s a complex story, and one historians debate.” However, the expansive exhibition has the potential to not only introduce new audiences to this story, but perhaps challenge long-standing ideas about Charles, the Stuart family, and the political climate of the era as well.

“People will be most fascinated by the International dimension of the story,” says Forsyth. “Art has a place in the representation [of history]. I’m just pleased these stories continue to generate interest in Scotland’s past, and encourage people to come to Scotland and visit museum.”

“Bonnie Prince Charlie the Jacobites” is open through November 12 at the Nationals Museums Scotland.